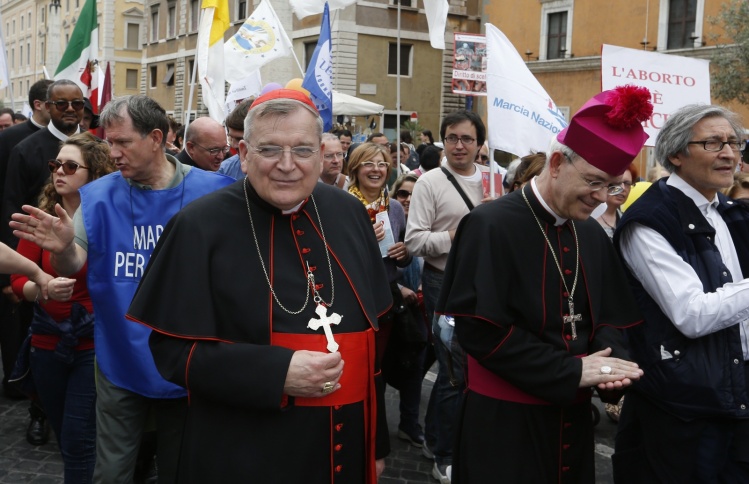 The Catholic opposition to Pope Francis is headquartered in the United States. It is a minority within the U.S. Church, but it is well organized. Its main intellectual organ is First Things, its episcopal leader Archbishop Chaput. But just as nineteenth-century European ultramontanists looked beyond the Alps to Rome, this movement is looking beyond the Atlantic. Besides the sympathetic Catholic journalists who spread archbishop Vigano’s “testimony” on August 27, there are also more overtly partisan leaders of this movement, such as Cardinal Raymond Burke and Stephen Bannon, Donald Trump’s former chief strategist. Burke and Bannon have both become involved with a right-wing Roman Catholic organization in Rome, the Dignitatis Humanae Institute. Bannon is now one of its leaders; Burke is president of its board of advisers. The institute has been described by its founders as an “academy for the Judeo-Christian West.”

The growing influence of these conservative American Catholics in Rome has something to do with the formation of a new xenophobic and populist Italian government, about which Bannon and Burke are both enthusiastic. And the esteem is mutual: a few weeks ago, the cardinal was invited by members of the new political élite to speak at the Italian Senate. But the Dignitatis Humanae Institute is also a reaction against the pontificate of Francis, and an affirmation of a particular idea of the relationship between the city of Rome and the Catholic Church. This latest attempt by Catholic traditionalists to recapture Rome for their cause reminds us of the two biggest crises for the papacy in the twentieth century, both arising in France: Action Française in the 1920s and the Society of St. Pius X in the 1970s and ’80s.

In a speech delivered during an audience at the French seminary in Rome, on April 9, 1927, Pius XI talked about Action Française in terms of “a strange romanità and a still stranger Catholicism.” Just a few months before, on December 26, 1926, Pius XI had formally condemned Action Française—a condemnation that lasted until 1939—and put the movement’s newspaper and the writings of its leader, Charles Maurras, on the Vatican’s official list of prohibited books. Of course, nobody wishes or expects Francis to put First Things, EWTN, or Breitbart News on a new index of forbidden media (the old index ceased to exist in 1966). But certainly “a strange romanità” is part of this right-wing brand of American Catholicism mobilized against Francis.

There are some striking similarities between the 1920s and the current moment. Action Française was a form of Gallicanism, or ecclesial nationalism. Its idea of Catholicism was more tribal and political than mystical. As philosopher Étienne Gilson put it, “they are very interested in Rome, but have no interest in Jerusalem.” For Action Française, it was the church as an institution and political power that mattered, not the Gospel. This is why they could simultaneously celebrate the majesty of Rome and revile a pope whose teachings they found inconvenient. (In fairness, it should be noted that, just as the right-wing movement represented by Burke and Bannon does not speak for all conservative Catholics in the United States, Action Française did not represent the entire spectrum of conservative Catholicism in France. Some Catholic monarchists distrusted Maurras, just as some doctrinally conservative American Catholics consider Bannon an opportunist.) Pius XI’s 1926 condemnation of Action Française had more to do with its political ideology than with its theological message, which remained somewhat vague. In any event, the condemnation had its intended effect. After 1926, the movement splintered. Some of its intellectual elite left the church, while others had an intellectual and philosophical conversion leading them back to Rome.

The case, fifty years later, of Archbishop Marcel Lefebvre and his Society of St. Pius X was somewhat different. Lefebvre subscribed to a “Gallican ultramontanism,” a very strong idea of Rome’s authority mixed with a French-centered sense of the church. In Lefebvre’s view, Rome had been betrayed by Vatican II. Lefebvre had his own political baggage—he had been a bishop in colonial French Africa and remained nostalgic about the Vichy regime—but his differences with the Vatican, unlike those of Maurras, were theological rather than political. Pope Paul VI was adamant in defending the council’s liturgical reforms, and Lefebvre believed these reforms would destroy the church.

For Bannon and his ilk, politics always comes first.
sharetweet

There are important similarities between each of these two episodes and the current wave of U.S.-based right-wing opposition to Pope Francis. One is a blurring of the distinction between theology and politics. The opposition to Francis begins with a few moral issues (marriage and the family, homosexuality, the death penalty), but it quickly expands to include critiques of Francis’s teachings on the economy, the environment, and immigration. For Bannon and his ilk, politics always comes first.

But there are also significant differences between the American Catholic opposition to Francis and its French precursors. The Catholic clergy and intellectuals gathered around Charles Maurras and Marcel Lefebvre had a strong sense of Rome that came from firsthand experience. For the new twenty-first-century “American Gallicanism,” Rome’s significance is largely symbolic; it is a picturesque backdrop. Now some American traditionalists have assigned themselves the task of saving Rome from its old-world decadence. They are picking up on a line of argument used by neoconservatives in the early 2000s, portraying Europe as a failed civilization (hollowed out by multiculturalism, demographic crisis, and secularism). To this charge, the American traditionalists would add that Europe—and, above all, Germany—is also the center of a failed theology, from the theologians of Vatican II to cardinals Lehmann and Kasper.

Another major difference: in the 1920s and the 1970s, Islam was not a major concern for Rome’s right-wing critics. Since 9/11, however, people like Bannon have been whipping up panic about a worldwide conflict between Islam and the West. Meanwhile, the Vatican has maintained its commitment to interfaith dialogue and rejected every effort to turn the war against terrorism into another Crusade.

Along with the split between America’s neo-traditionalists and the Vatican, there is also of course a split within the American church, and it is not clear where either of these will end. Will the first split continue after this pontificate ends? Certainly, the split within American Catholicism will not disappear after the next conclave, any more than the parallel split in American society will disappear after the next presidential election.

Finally, it is worth remembering that the victory of the popes over Maurras and Lefebvre was both political and ecclesial. The traditionalists were never able to convince most French Catholics, or to bring over a significant number of French bishops. The current situation in the U.S. episcopate is in that sense much more dangerous, with several American bishops openly signaling their distrust of Pope Francis. Politically, the monarchism of Action Française and later Catholic traditionalists in France never attracted more than a small minority of the French. It is still too soon to say whether the mutiny of Burke and Bannon against Francis is only a marginal spasm of reaction or something much more significant. But given the current political instability in Italy and throughout the West, and the deep enmities within the American church, no one should be complacent about the threat they pose.

Correction: This article originally described the Dignitatis Humanae Institute as "new." In fact, it was founded in 2008.

The Church They Don’t Like May Be Their Own