Who Is More Catholic than Whom? 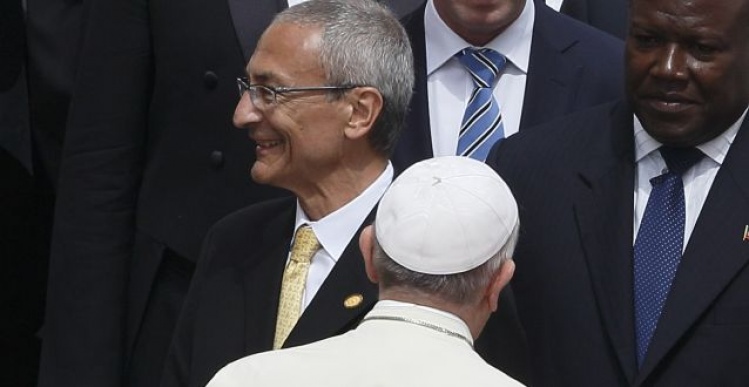 To hear the many howls of protest from conservatives, you’d think that a handful of emails released by WikiLeaks demonstrates that Hillary Clinton’s campaign is a nest of anti-Catholics. Fortunately for her, the emails, which are four to five years old, tell a far more interesting tale about the struggles inside the Catholic Church in the period before the ascendancy of Pope Francis.

All journalism relying on WikiLeaks should note our government has accused Russia of trying to influence the American election. Voters need to be wary of Vladimir Putin’s apparent preference for Donald Trump.

But given the storm the Catholic emails have provoked, readers might want to make up their own minds by consulting the full texts.

In one 2012 exchange between John Podesta, the founding president of the Center for American Progress and now Clinton’s campaign chairman, and Sandy Newman, president of a group called Voices for Progress, Newman expressed the anger of many liberals at the time that conservative Catholic bishops were making the Affordable Care Act’s contraception mandate central to a critique of President Obama.

Among other things, Newman (who is not part of the Clinton campaign) called for a “Catholic Spring, in which Catholics themselves demand the end of a middle ages dictatorship and the beginning of a little democracy and respect for gender equality in the Catholic Church.”

Of course many Catholics took offense, especially at that “middle ages dictatorship” line. Podesta didn’t comment on it. He referred instead to progressive Catholic organizations formed after the 2004 election, when conservative bishops seemed to side with George W. Bush.

“We created Catholics in Alliance for the Common Good to organize for a moment like this,” Podesta said, referring to himself and his progressive Catholic allies. “But I think it lacks the leadership to do so now. Likewise Catholics United. Like most Spring movements, I think this one will have to be bottom up.”

Ironically, a “Spring movement” did arrive in the church—but from the top, with Pope Francis’s election in 2013. Also ironically: Many of the conservative Catholics inclined to denounce the Clinton camp have been critical of Francis—it gives new meaning to the term “more Catholic than the pope”—while more liberal Catholics like Podesta have championed him.

I should say I’ve known Podesta for many years and often heard him speak with affection for the church. In response to this controversy, he told me in an email that as “a lifelong practicing Catholic, I take very seriously the social and moral teachings of the church.” Turning to Trump’s “assertion that His Holiness, Pope Francis, was ‘disgraceful’ for standing up for immigrants,” he said that Trump “may want to apologize for his attacks on Pope Francis before he levels attacks against us.”

The other exchange, between John Halpin and Jennifer Palmieri—both were at CAP then, both are Catholic, and Palmieri is now Clinton’s communications director—was spurred by a report that Rupert Murdoch and a top Wall Street Journal editor had decided to raise their young children as Catholics.

Noting how many leading conservatives are Catholic, Halpin wrote: “It’s an amazing bastardization of the faith. They must be attracted to the systematic thought and severely backwards gender relations and must be totally unaware of Christian democracy.”

Palmieri replied: “I imagine they think it is the most socially acceptable politically conservative religion. Their rich friends wouldn’t understand if they became evangelicals.” Podesta was copied on the exchange, but didn’t respond.

This doesn’t sound anti-Catholic, unless you see calling the church “conservative” as a slur. It’s a commentary on how wealthy people view evangelicals. For his part, Halpin, who, like Palmieri, is Catholic, wrote Thursday that “my intention in this private note was not to insult Catholics or people of faith.” He added: “I’m a progressive Catholic who was reacting in a private email to the arguments of leading conservatives who often misuse Catholicism to defend their agenda. Liberals can be just as guilty of this as conservatives. That’s what makes Catholic social teaching powerful.”

The factual bottom line is that in private correspondence, the two Clinton campaign officials said nothing anti-Catholic, although they did not reproach the critical comments of their friends.

As a progressive Catholic myself, here are the lessons I draw.

Liberals are free to criticize religion in general or particular religions, but they should resist casual put-downs of Catholics and Christians that they’d condemn if they were directed at other faiths.

Conservatives in the Catholic hierarchy need to pay attention to Pope Francis and ponder the high costs of tying a church with a rich tradition of social teaching to the right end of politics.

Finally, this episode is part of an ongoing argument among more liberal and more conservative religious people, and it will long outlast this election.

A Recipe for Autocracy