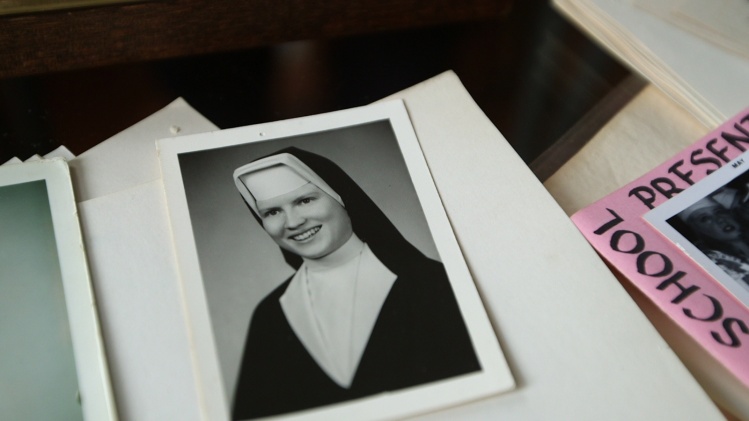 A portrait of Sister Catherine Cesnik is seen in a still from the Netflix documentary series "The Keepers." (CNS photo/courtesy Netflix)

In November 1969, Sister Catherine Cesnik, a popular, twenty-six-year-old teacher at an all-girls Catholic high school in Baltimore, disappeared. Two months later her frozen body was found in a nearby landfill, her skull fractured and her clothes partly removed. No one was ever charged in her murder, which is now the subject of The Keepers, Netflix’s latest foray into true-crime original programming. The Keepers follows a pair of Cesnik’s former students who have devoted their retirement years to pursuing the case. The two women have amassed vast quantities of evidence, apparently more than the police know, but the drama of the documentary lies in the tantalizing possibility that Cesnik was killed just as she was about to expose the most outrageous and bizarre case of clergy sexual abuse I have ever heard of.

If the allegations are true, a gun-toting priest-psychologist, working as a guidance counselor at the school, not only took advantage of the many troubled students who came to see him, but—abetted by a local gynecologist—also pimped them out to a large circle of men, including local politicians, uniformed police officers, other priests, and teaching brothers. The teenage victims, who barely understood what was happening, were bullied into silence: terrified by threats that they might end up like Cesnik, mortified with shame when they were diagnosed with “whore personality,” they were told they had to submit to these acts before God could forgive them. The abuse was accompanied by Latin prayers and signs of the cross to make them seem like rituals. Only decades later, long after the statute of limitations ran out, did the victims begin to come to terms with what had been done to them, recalling horrifying memories they had suppressed and speaking out.

The early episodes of The Keepers seem to build a strong case that Cesnik was killed by the pedophile priest to keep her from telling what she had been hearing from some of the victims. That priest, Fr. A. Joseph Maskell, was also the chaplain of the Baltimore police, where he had a highly placed brother, and where he is alleged to have found clients for his covert procurement operation. Were the police protecting him? Was the Church? The non-Catholic state’s attorney who won’t pursue the case seems unaccountably blasé about the many boxes of evidence that have disappeared.

But later episodes complicate the theory that Maskell was the killer, introducing evidence that there were at least six other men who may have had something to do with her disappearance or murder, or with the hiding of her body. These include a mysterious accomplice of Fr. Maskell known only as “Brother Bob,” another man who lived in the apartment downstairs from Cesnik, and an ex-Jesuit priest who had wanted to marry her but denies they had a sexual relationship in spite of evidence to the contrary. The strangest of this group once called a radio talk show to say he knew that someone still had Cesnik’s rosary, but then changed his story; the creepiest kept a mannequin of a nun in the attic of his brother’s home and kept telling his sister-in-law that it was calling out to him accusingly. There could have been many more who had something to lose if Cesnik talked.

No question about it, the Church comes off looking pretty bad
sharetweet

Before The Keepers ends we hear from a former altar boy who says he knows how Fr. Maskell ended up at the girls’ high school in the first place: It happened in 1967, right after the boy’s irate mother went to the chancery to complain that Maskell had been abusing him. That would contradict the diocese’s statement that there were no accusations against Fr. Maskell until women started coming forward in the 1990s (the former altar boy claims with disgust that a high-ranking diocesan official had tried to buy his silence). Maskell’s 1975 departure from the high school is an even bigger mystery: A new principal came in, and she immediately told Maskell to get the hell out. If one could do that in those days, why didn’t everybody? He eventually wound up in Ireland, counseling victims of sexual abuse....

The saddest scene of The Keepers comes near the end. A young state legislator, a non-Catholic who had been abused by his adoptive father, introduces a bill to lengthen the statute of limitations so that victims have more time to recover and to pursue their abusers. Out of nowhere, he is blindsided by accusations that he is attacking the Catholic Church, with which he has never had any contact. Diocesan officials and attorneys show up to testify against the proposed bill, and it dies in committee—not just once, but repeatedly, year after year. (It finally passed in April.)

No question about it, the Church comes off looking pretty bad—even worse than it does in Spotlight, the film about the Boston Globe’s investigation of that city’s priests. But it would be hard to claim that anti-Catholic sentiment drove the making of this series. The two retired sleuths did not originally know about the abuse going on at their high school; as relatively untroubled ‘A’ students, they were not the type to end up in Maskell’s guidance office. They learned of it only in trying to figure out what happened to their beloved Sister Cathy, whose example even inspired one of them to become a teacher. The victims, now mature women with respectable careers, come across as sincere people who’ve carried heavy burdens for a long time. Unlike some of the male suspects, they don’t seem unhinged—they certainly know better than to think that suing the Church will make for easy money. Concerns about the validity of “recovered memories,” however, keep their case out of court. (Two dioceses have responded to the allegations made in The Keepers.)

On the other hand, The Keepers makes use of techniques and effects that can undermine a viewer’s trust. Too often, when a victim is recounting events that (of course) were never captured on film, we are shown black-and-white footage of a teenage actress, seen only from behind, walking through a door or into a forest, accompanied by spooky music. At times this can become as surreal as the mannequin in the attic—which also appears (we are not told) to be a reconstruction by the filmmakers, not the original one. Staged liturgical processions filmed in black-and-white and shot from behind are interspersed with actual footage from the pre-Conciliar era, creating a curious mishmash of pre-reform and post-reform practices, showing no real understanding of how the liturgy was changing at the time, and how profoundly these changes were affecting Catholic life. Indeed, though we are briefly told that Vatican II brought massive change to the American Church, the film could have done a much better job of presenting the historical context. We watch Cesnik transition from full-cover habit to modified habit to ordinary clothes, from convent life to her own apartment and a romance with the Jesuit, without it being made clear that many sisters were experiencing such changes at the time; they no longer seem as alarmingly revolutionary as they did back then. People who didn’t attend school in the 1960s may not fully grasp how the young Fr. Maskell cultivated an image of counterculture cool by letting students smoke and drink in his office—violations that the schools of that era harshly punished, at a time when smoking and drinking were universal adult behaviors. The filmmakers could also have consulted an ethnographer or sociologist about how to question informants: The interviews with suspects and law enforcement officers are full of amateurish queries that enable them to easily evade difficult topics.

We still don’t know who killed Sister Cathy. Fr. Maskell’s body was recently exhumed, and his DNA did not match evidence found at the crime scene. I would say the greatest value of The Keepers is that we hear so much from the victims: about how victimization occurs, how it devastates the lives of innocent people, and why it is so difficult for victims to tell—or even to remember.

Peter Jeffery is the Michael P. Grace II Professor of Medieval Studies at the University of Notre Dame.

Tradition You Can Hold