Who Will Be the Next Bishop of Milan?
By Robert Mickens
Letter from Rome
Bishops
Pope Francis 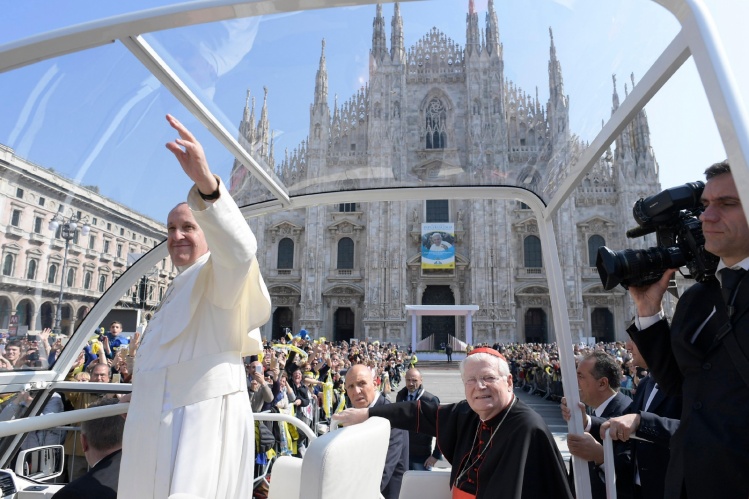 Pope Francis is accompanied by Cardinal Angelo Scola of Milan as he greets the crowd outside the cathedral in Milan March 25. The pope was making a one-day visit to Milan. (CNS photo/L'Osservatore Romano)

Pope Francis is preparing to change the leadership of several important dioceses around the world. The moves, which he’s expected to begin rolling out in the coming days, are likely to give a huge boost to his unrelenting and long-term project to change the mentality and direction of the global Catholic Church.

It will give him a golden opportunity to replace men who have been less than exuberant about his attitude adjustment program and efforts at reform.

Others who are eligible to retire, such as the Cardinals Donald Wuerl (Washington), Ricardo Ezzati Andrello SDB (Santiago de Chile), John Hon Tong (Hong Kong) and Laurent Monsengwo (Kinshasa, DRC) are likely to stay on for the time being as they have been seen as useful allies to the eighty-year-old pope.

The heads of several Vatican offices are also beyond the retirement age. They include Cardinals Beniamino Stella (Clergy), Angelo Amato (Causes of Saints), Francesco Coccopalmerio (Legislative Texts) and George Pell (Economy), as well Cardinal Lorenzo Baldisseri (Synod of Bishops). Saving any possible scandal, Francis does not seem in any hurry to replace them.

As far as the upcoming changes are concerned, first on the list appears to be the appointment of a new Archbishop of Milan. According to media reports, Francis has already decided on the man who will lead the Catholic community in Italy’s financial and fashion capital, which is also Europe’s largest diocese.

The current ordinary, Cardinal Angelo Scola, submitted his resignation to the pope last November when he turned seventy-five. And although heads of important dioceses, especially cardinals, are often left in post a few years beyond the canonical retirement age, Scola has made it known that it will not be so in his case.

The man who is believed to have been one of the leading vote-getters in the last conclave has already begun preparations to move out once his successor is formally announced. Italian media says that is likely to happen in the next several days.

Pope Francis and Cardinal Scola have had nothing warmer than a mere “cordial” relationship. They have very different visions concerning the nature of the Church and its role in society.

Some of this is due to the cardinal’s personal history. He was one of the first priests to be ordained in 1970 exclusively for service to the ecclesial lay movement, Comunione e Liberazione (CL). The movement’s founder, Fr. Luigi Giussani (d. 2005), assured this anomaly (in 1985 he founded clerical branch for CL) by making private agreements with the bishops who ordained the young men.

Scola made a fast and steady rise through the Church’s clerical ranks with the support of John Paul II and then-Cardinal Joseph Ratzinger. It was the latter, as Benedict XVI, who agreed to the cardinal’s request to be transferred in 2011 from the prestigious position of being Patriarch of Venice—as was St. Pius X, St. John XXIII and John Paul I—to head his native diocese of Milan.

The appointment of a new bishop for Milan is huge. And not just for the Church in Italy.
sharetweet

Many in Italy frowned upon the move and saw it has part of Scola’s ambition to become the next Bishop of Rome. Instead, the cardinals elected Jorge Mario Bergoglio from Buenos Aires. And as Pope Francis, the Argentine Jesuit has kept Scola at a safe distance. The two men have had only a few meetings during this pontificate and Francis did not visit Milan (one of Italy’s most important cities) until this past May.

Make no mistake; the appointment of a new bishop for Milan is huge. And not just for the Church in Italy.

The diocese was founded in the first century and it was there in 313 that Constantine the Great signed his history-changing Edict of Milan that allowed Christianity to flourish throughout the vast Roman Empire.

Some sixty years later the people of Milan elected by popular acclaim a new bishop who would have a major influence on the entire Church. He was a Roman governor named Aurelius Ambrosius, the man we now know as St. Ambrose, one of the original four Latin doctors of the Church.

Some 1,200 years later another future saint would shepherd the Diocese of Milan and also make an important contribution to the development of Catholicism. His name was Charles Borromeo, one of the leading figures of the Counter Reformation.

And one of the most forward-looking Catholic thinkers and spiritual guides during the pontificates of John Paul II and Benedict XVI (which some saw as restorationist) was also a bishop of Milan. He was Cardinal Carlo Maria Martini (d. 2012), the Jesuit scripture scholar who guided the great diocese from 1979-2002.

Milan and its bishops, at crucial times in history, have played an important role in Church reform. Pope Francis is very much aware of this and that’s why he has been carefully pondering whom to appoint to the post.

Italian Church insiders have narrowed their speculations down to a few names. They include Cardinal Pietro Parolin, currently the pope’s Secretary of State. The reasoning is that if Francis were to appoint the lifelong Holy See diplomat to Milan, it would provide the sixty-two-year-old priest with important pastoral/administrative experience to boost his profile and make him a papal candidate at the next conclave. And if that were to happen, Parolin would be following in the footsteps of Paul VI, another papal diplomat who led the Diocese of Milan and then became pope.

Two of Milan’s auxiliary bishops are also being talked about as the possible successor to Cardinal Scola. One is the soon-to-be sixty-six-year-old Bishop Mario Enrico Delpini, the diocese’s vicar general and head of the permanent formation of the clergy. The guesswork here is that since Francis recently replaced his retired cardinal vicar of Rome (Agostino Vallini) with an auxiliary bishop specifically in charge of priests (Angelo De Donatis), the pope might follow the same pattern for Milan.

The other Milan auxiliary being mentioned is Bishop Paolo Martinelli, a fifty-eight-year-old Capuchin Franciscan precisely because he’s, well, a friar. If he’s the one, look for the announcement to be made on June 28. That’s the date Fr. Paolo was ordained bishop after his appointment by Pope Francis in May 2014.

A fourth candidate for Milan is Bishop Franco Brambilla of Novara, which lies some thirty miles west of the vast metropolis. A Milan native and theologian who studied scripture under Carlo Maria Martini, many believe he is in pole-position to succeed Scola. If they are right than perhaps the announcement will come on June 30, the day Bishop Brambilla turns sixty-eight. Or it could come on July 13, the day in 2007 when Benedict XVI named him auxiliary bishop of Milan.

There is one other candidate whose name surfaces now and again. He’s Archbishop Pierbattista Pizzaballa, a fifty-two-year-old Franciscan who has been the apostolic administrator of the Latin Patriarchate of Jerusalem for the past year. During the twelve years immediately prior to taking up his current post he was the custos (or superior) of the Custody of the Holy Land that is administrated by the Order of Friars Minor (OFM), the religious community he joined in 1976 in central Italy.

Fr. Pierbattista Pizzaballa’s appointment as administrator of the Arab-speaking patriarchate came as a surprise, especially because he lacks a good command of the language. He is, in fact, a fluent Hebrew-speaker. At the time of his appointment he and others said it was only a temporary assignment until a new patriarch was named.

His mandate was to put the patriarchate’s finances in order and restructure its ministries. Only several days ago the Franciscan announced that, after much consultation, he had brought that task to a conclusion. And he mandated that all changes be made before August 15.

If that means “mission completed” and Pope Francis moves the friar-archbishop to Milan (as was suggested in these pages last year), then maybe the announcement will come on that day in August or sometime afterwards. He marks a number of significant anniversaries in September, for example: receiving the Franciscan habit (Sept. 5); first profession (Sept. 7); priesthood ordination (Sept. 15); episcopal consecration (Sept. 10).

But the pope could also formally name Fr. Pierbattista the next Archbishop of Milan on June 24. That would be exactly one year after his unpredictable appointment to lead the Latin Patriarchate of Jerusalem.