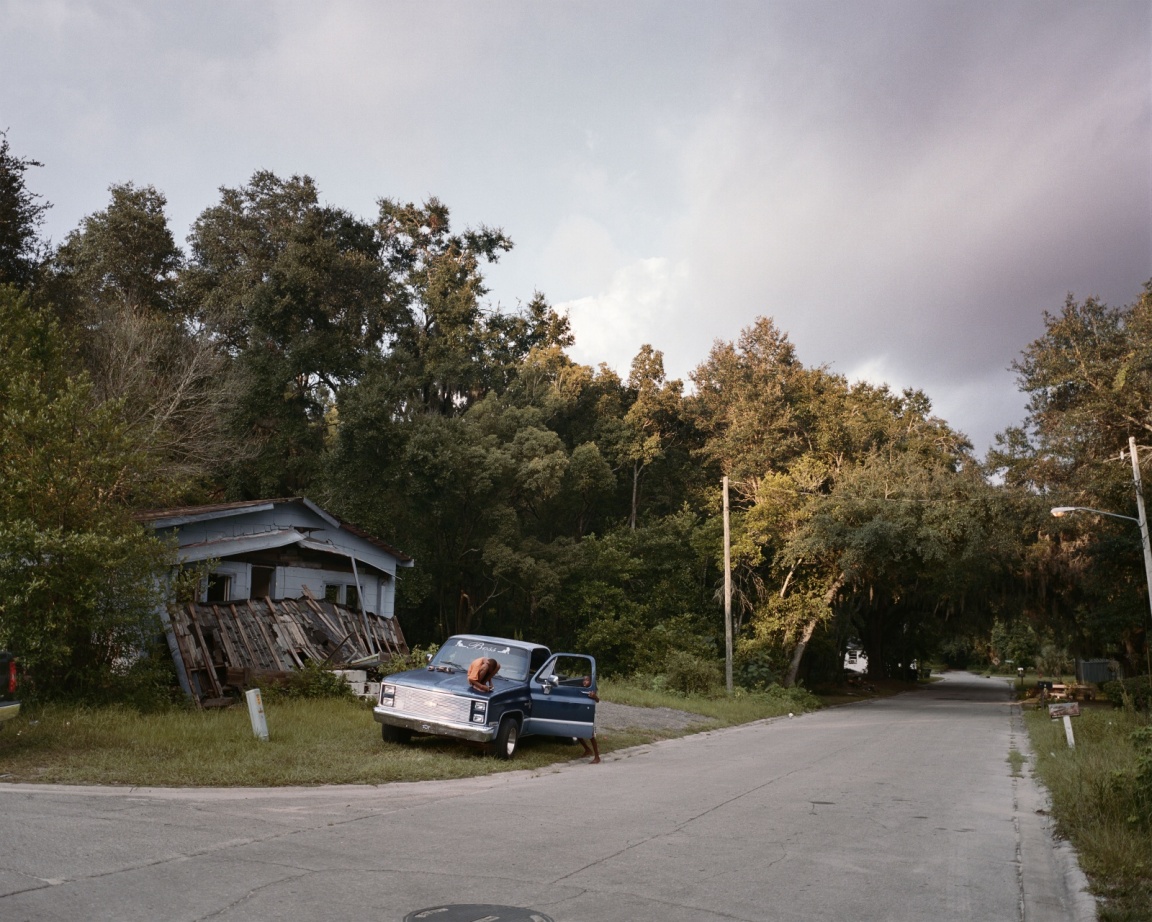 Where We Could Go

The Whitney Biennial is a show that aims to assess the state of the American art world by asking: Where are we now? It’s a sizable task, one that the museum accomplishes better in some years than others. Reflecting on the insecurities, tensions, and mood of the nation this time around is especially daunting, given the polarization following the election of Donald Trump. The scope of the challenge is evident: the 2019 biennial—spread over three full floors of the Whitney—fails to deliver a satisfying answer to the question it poses. And now, a widening controversy over a Whitney board-member whose company has been tied to the sale of military supplies is casting another shadow.

Let’s start with what succeeds: a video of the violinist Laura Ortman playing in mountainous New Mexico surroundings, and Daniel Lind-Ramos’s Maria-Maria, which takes the iconic shape of the Virgin of Guadalupe while incorporating references to Hurricane Maria, Mary’s head made of a coconut found near the artist’s home in Puerto Rico. There’s something transcendent to both works, with their focus on the natural world and their connection to the spiritual realm. Then there’s Heji Shin, who draws attention to beginnings with a series of Baby photographs, some of the biennial’s most arresting works: raw, jarring shots of infants’ heads right after crowning. While the act of childbirth isn’t romanticized—the babies are bloody, with purple faces and matted hair—there’s something deeply spiritual to witnessing these initial precious moments, a baby’s first breaths memorialized on camera 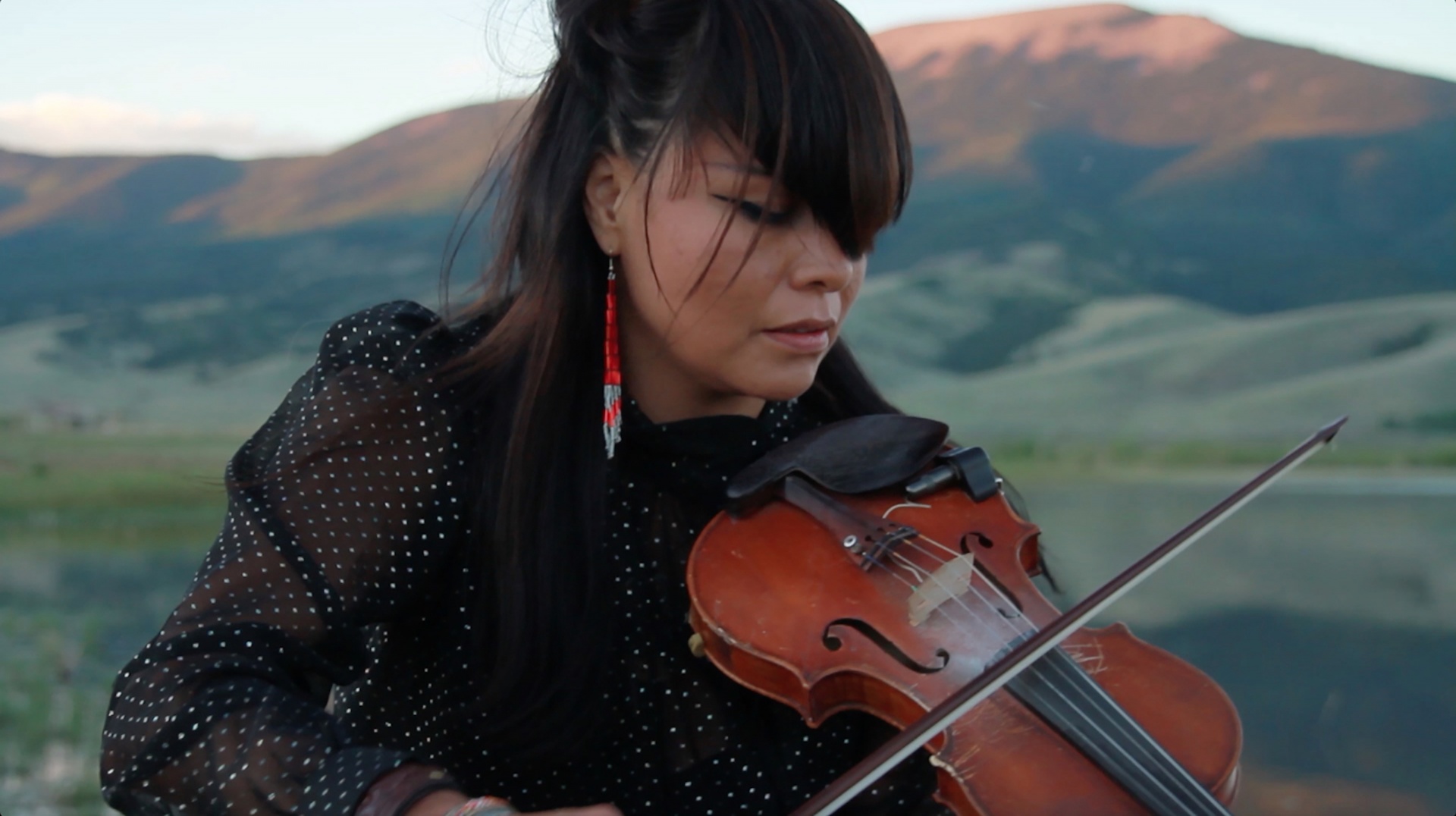 Laura Ortman, My Soul Remainer, 2017. (Image courtesy of the artist)

More abstract highlights can be found in the works of Brian Belott, whose use of unconventional materials yields reliably appealing results—such as when he freezes ordinary objects (like toothpaste and wrappers) with pigments in ice, then backlights them to resemble stained glass. Belott’s Untitled (Puuuuuuuff), which includes his signature textured cotton balls and a working fan, is one of the show’s most original contributions in painting and assemblage. His sanctification of detritus is of a piece with his playful personality. Text accompanying one work featured a quote that stuck with me: “A well-delivered joke could save the world.”

Belott might be right, and the show benefits from artists who use humor to address real-world crises. Many of the strongest contributions are in video and new media. Martine Syms’s Intro to Threat Modeling consists of both. Syms, one of the art world’s rising stars, seeks to make visible the black-female experience in the United States. She typically incorporates photography, video, and avatars, in this case to riff on how a hypothetical attacker might identify the weaknesses of his potential victim. Her installation is unlike anything else in the biennial, with its engaging, simulated frontwoman, an avatar who functions as a quasi-self-portrait of the artist. “Who’s trying to f*ck me over right now?” the avatar asks—a query that generates nervous laughter from the gallery audience. It’s a funny and engaging approach to dealing with a heavy subject: vulnerability and the viability of safe space in a technologically dominated world. 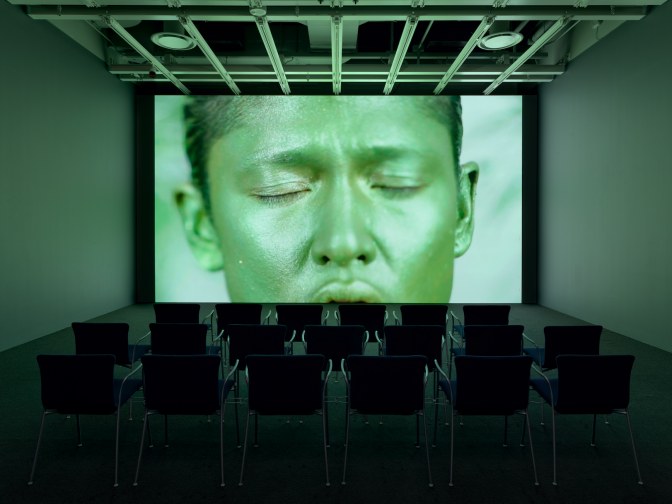 Korakrit Arunanondchai, with history in a room filled with people with funny names, 2017. (Photograph by Ron Amstutz)

A visit to the screening room is also recommended; though hidden from the main floor, it features a selection of films that are wide-ranging and a delight to watch, like Autumn Knight’s Roaches Aren’t the Easiest Creatures to Milk. The fake infomercial for cockroach milk uses deadpan humor to craft a thoughtful, striking critique of housing inequality and late capitalism. Equally noteworthy is with history in a room filled with people with funny names, Korakrit Arunanondchai’s melancholic montage. In Thai, the artist pays homage to his grandmother and meditates on the modern confluences of memory, technology, and spirituality. The montage is suffused with poetic ruminations: “In this strange world, a hierarchy of images form the design of life.”

One of the biennial’s stated aims is to emphasize the power of the artist’s hand. Few artists exemplified this more than Kota Ezawa, whose piece National Anthem addresses the ongoing controversy in the NFL. The watercolor animation (which consists of around two hundred individual watercolors, each of which Ezawa painted roughly three times) melds imagery from football players’ kneeling protests as “The Star-Spangled Banner” plays in the background. By removing the media’s noise and depicting the act of solidarity in its purest form, Ezawa’s animation is a moving tribute to the bravery exhibited by Colin Kaepernick and the many players who followed suit. There are also phenomenal sculptural contributions. One of the best is Nicole Eisenman’s Procession, a sculptural ensemble on the sixth-floor terrace that consists of towering, dismal-looking, dystopian figures walking in line—misfits, but unified and confident as they march. As the Whitney notes, the work is about “how to protest when protests feel like a constant cycle.” With this year’s contributions, Eisenman, regarded as one of the most important contemporary artists in America, proves her virtuosity is not confined to painting alone. It’s the third biennial she’s been in, and her work here also includes an inventive live-video feed of a gallery just a few floors above, home to a concurrent exhibition, Spilling Over: Painting Color in the 1960s. The feed functions as a thermal map with an animation overlaid; it’s an institutional critique of how museums have become sanctuaries to often-privileged male genius. 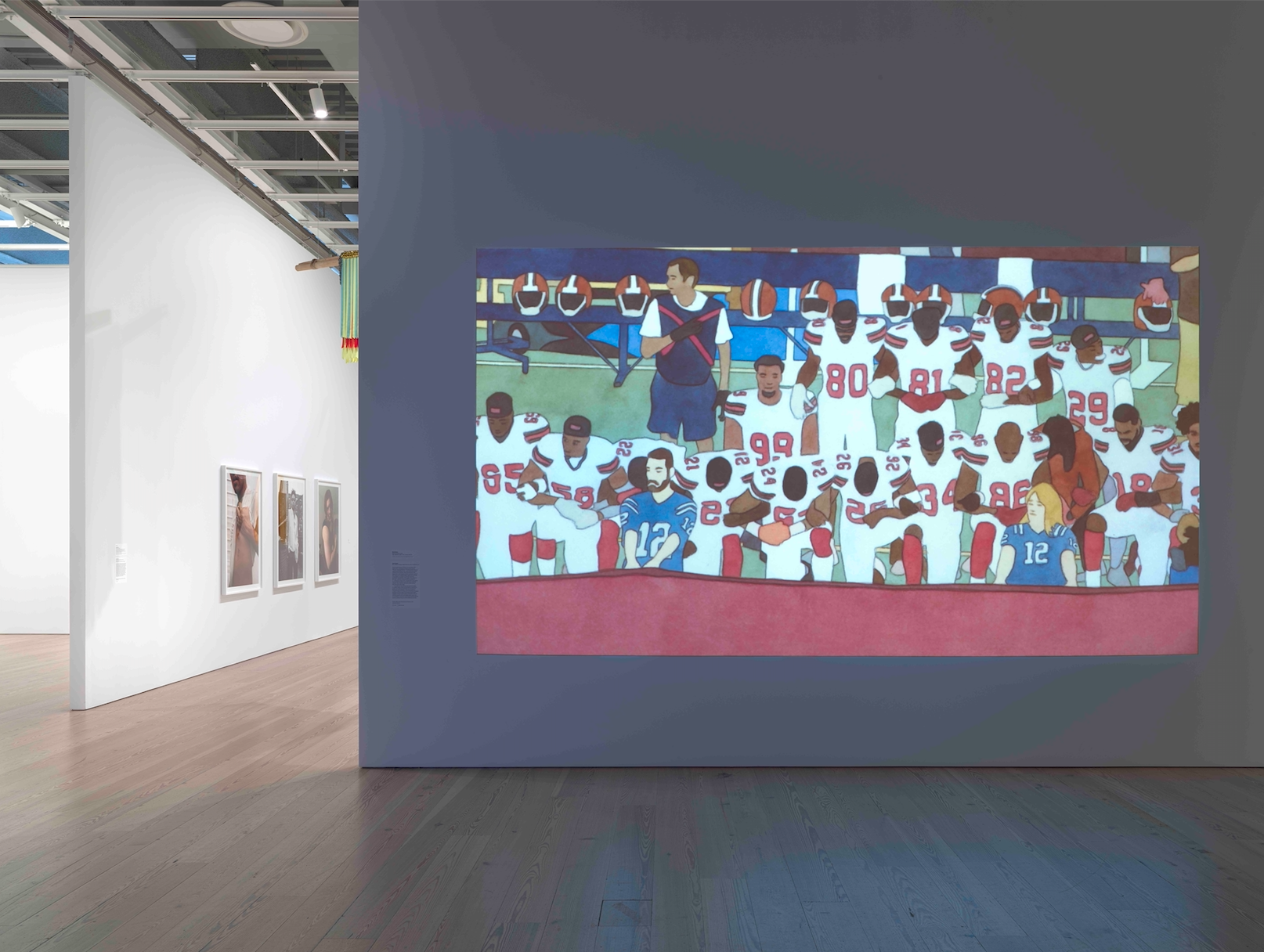 Yet the biennial itself is characterized by diversity, both in the media exhibited, and in who contributed. More than half of the artists are non-white, more than half identify as female, 75 percent are under the age of forty, and just five have previously shown work in a Whitney biennial. Still, a handful of standout pieces and a wide variety of artists don’t make up for an overall disappointing feeling of safeness, the sense that the exhibit fails to really confront the question of “where we are now.”

The Whitney also continues to struggle with controversy. This year, it’s the presence of Warren Kanders as vice chairman of the board. Kanders is the chief executive and majority shareholder of the Safariland Group, a global defense firm that operates a subsidiary whose tear gas has allegedly been used against asylum seekers at the U.S.-Mexico border. More than half of the artists featured in the biennial signed a letter demanding Kanders be removed from the board, and one of the artists commissioned to participate, Michael Rakowitz, declined to contribute work as a form of protest. Then, on July 19, four artists (including Eisenman and Arunanondchai) also withdrew from the biennial. A day later, four more followed suit. The renewed attention came after Artforum published a critique urging a boycott of the biennial and imploring artists to withdraw.

Maybe art by itself can’t solve the world’s problems. But it’s fair to expect that art institutions should do something to demonstrate their convictions.
sharetweet

One of those to pull out since is Forensic Architecture, a London-based research firm that contributed, along with Praxis Films, Triple Chaser, a ten-minute film that comments directly on the Kanders situation. A powerful, visceral work, Triple Chaser takes its title from the name of the tear-gas canister the subsidiary company sells. It opens with a quote from a letter Kanders circulated in response to calls for his resignation: “While my company and the museum have distinct missions, both are important contributors to our society.” The piece then identifies the human-rights violations in which Safariland has been complicit. Another element of the short film details the role of an algorithm developed by Forensic Architecture in tracking down images of the Triple Chaser canister that appear. (The sale and export of tear gas is not a matter of public record, unlike the sale and export of military equipment from the United States.) A statement then follows, alluding to the data gathered via the algorithm: “The next time Safariliand munitions are used against civilians, we’ll know.” Then comes closing footage of the shooting of a Palestinian man on the Gaza border, the ammunition made by another company Kanders owns.

Another line from Kanders’s letter seems worth mentioning here: “I believe that the politicization of every aspect of public life, including commercial organizations and cultural institutions, is not productive or healthy.” Does the museum, by continuing to back him, agree? Of course, art is nothing if not the expression of the political, a notion Walter Benjamin made clear (and that contemporary masters, some of whom have work in the biennial, continue to demonstrate). Maybe art by itself can’t solve the world’s problems. But it’s fair to expect that institutions that claim to play a role in projecting the transformative power of art should do something to demonstrate their convictions.

2019 marks twenty-six years since the infamous 1993 biennial, often dubbed “America’s most controversial show.” It’s considered the birth of identity politics in mainstream art, and generated an enraged response from white-male critics over its attack on the art world’s privilege and homogeneity. Yet the institutional art world remains wedded to privilege, and has now even co-opted “resistance.” (Recall that last year the Whitney was charging visitors $25 to look at protest posters.) Nicole Eisenman’s installation was a comment on the cyclicality of protest, but her withdrawal of it might also show its efficacy. Thankfully, we can take heart in the courage of the artists who have pulled their work: they should be commended for doing what the Whitney itself seems unable to do. Rather than answering where we are now, they’re showing where we could actually go. 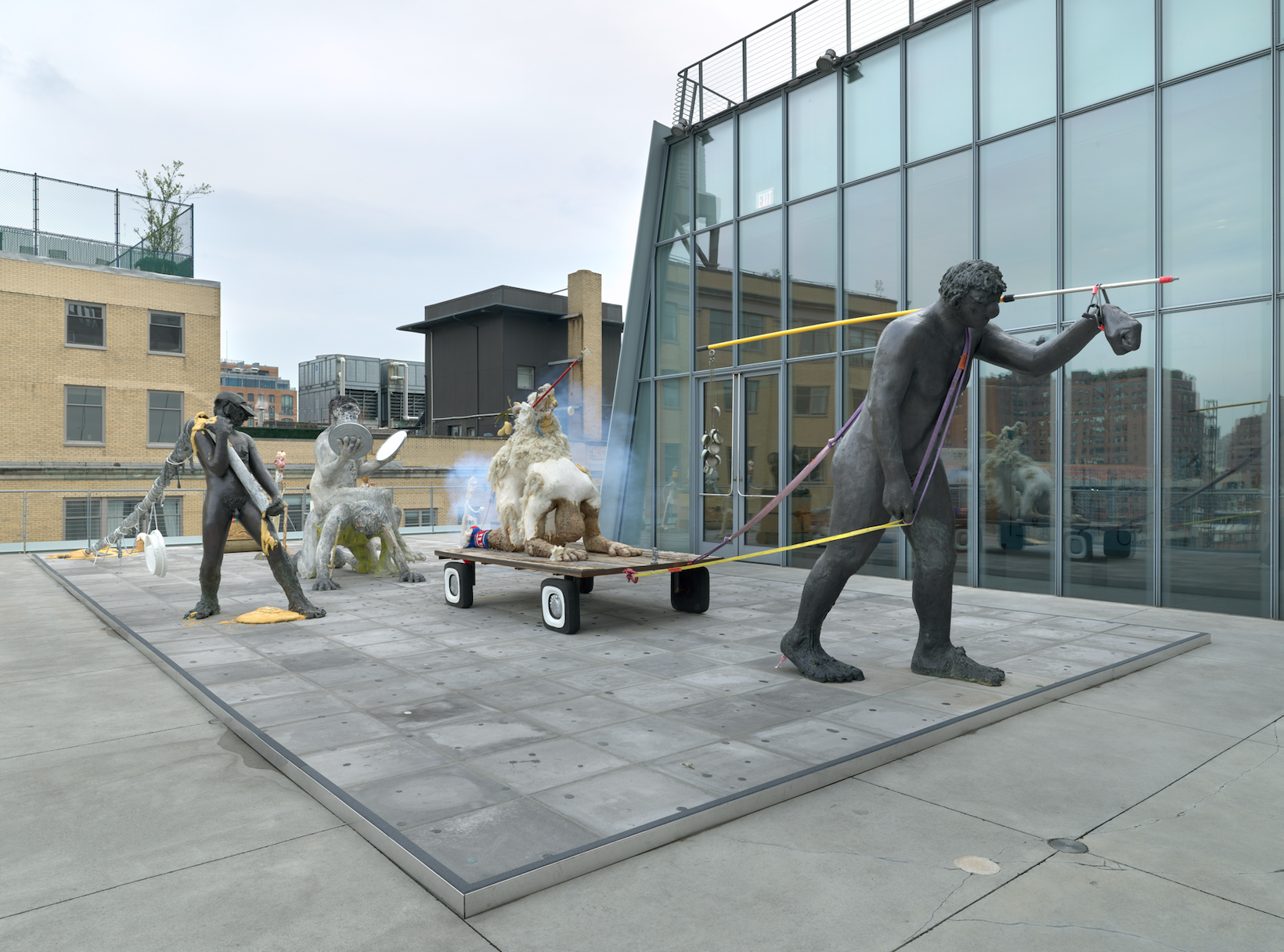