It Won't Be about Francis vs. the Bishops
By Rita Ferrone
Pope Francis
U.S. Catholicism
Bishops 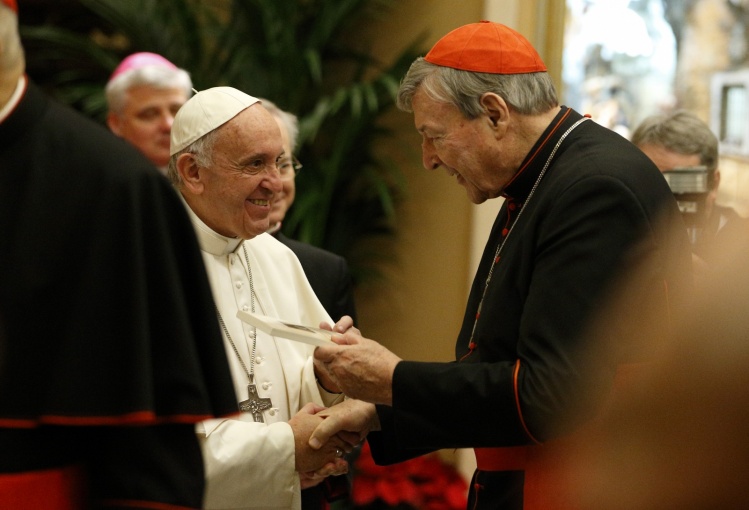 A recent column by Ross Douthat in the New York Times (“Pope Francis’ Next Act” July 15, 2017) tags the issue of communion for the divorced and remarried as the “great controversy” of the past two years of the Francis pontificate. He says it has reached “a stalemate,” with Francis on the one side, and “bishops the world over” on the other. Now that Cardinal George Pell has gone to Australia to face sex abuse charges, and Cardinal Gerhard Mueller’s term as Prefect of the CDF has not been renewed, and Cardinal Meisner has died, and Cardinal Angelo Scola has retired from the Archdiocese of Milan, Douthat worries that “resistance to Francis in the highest reaches of the hierarchy” is eroding. What will be the “next act” of the “drama” of this “liberal pope”?

I hope the readers of the New York Times take Douthat’s analysis with a grain of salt. First of all, I think that history will look on Pope Francis’s post-synodal exhortation Amoris Laetitia (2016) as a very modest gesture toward a more humane pastoral approach to marriage, not a great standoff between Pope Francis and his bishops. The kind of flexibility and accompaniment recommended by the Pope is not outside the scope of church teaching. Anxiety about rules-making and rules-keeping has magnified the controversy over communion (something which has always been subject to discernment in the “internal forum”) far beyond its actual weight. All that Pope Francis has done is to affirm that the pastoral people who are exercising faithful judgment and extending mercy in individual circumstances with the divorced and remarried are right to do so. The fact that some prelates are having a hard time with this makes it their drama, not the Pope’s.

Second, it is far from clear that “bishops the world over” are opposed to Amoris Laetitia. They actually shaped this document to an extraordinary degree, through the dialogical process that led up to it. Pope Francis quotes from their interventions in the Synod on the Family generously throughout. The Synod was preceded by widely-used questionnaires, and included extensive discussion which has been commonly acknowledged as open. Bishops took advantage of this atmosphere of openness to share their experiences and shape the results. A wide range of issues appears in Amoris Laetitia. Most of the apostolic exhortation isn’t even about divorce!

The few who were unhappy with Francis have lost no time in making their feelings known, it’s true. A group of thirteen bishops wrote to Francis during the Synod, voicing concern that teaching on marriage might be weakened. After the Synod was over, four cardinals put their objections-challenges in the form of “dubia”—yes or no questions—which they sent to Francis. Later, one of them (Cardinal Raymond Burke) threatened to censure Pope Francis for heterodoxy.

Because antipathy to Francis among conservatives enjoys a particularly big megaphone on the internet, it may seem as though there is a lot of opposition out there, but look at the numbers. There were more than 230 participants in the Synod. Many of the bishops at the Synod represented whole episcopal conferences, and have since returned to their conferences with a mandate to respond more pastorally to the needs of families. The alarm over Francis’s supposed lapse in orthodoxy over one point concerning the divorced is proceeding from… four cardinals? The dubia cardinals were not granted an audience with the Pope to press their case, and they were even severely reprimanded by other prelates when their initiative came to light. They certainly do not represent “bishops the world over.”

How ought we to evaluate the last two years of Francis’s pontificate?
sharetweet

How ought we to evaluate the last two years of Francis’s pontificate? I think it much more likely that his encyclical on the environment, Laudato si’ (2015), will be what historians remember from this time as a landmark achievement. Previous popes have spoken about the earth and ecology, but not like this. Francis has raised the subject to a new level of prominence, and at the same time tied it to the tradition of social encyclicals that have a firm base within Catholic teaching. The issues addressed in that encyclical are not going away any time soon, either. Future generations will read this encyclical as prophetic.

Pope Francis’s public and persistent defense of migrants and refugees has also placed the Church in the fray of a very present crisis in Europe. This is another problem that is not going away any time soon, and is linked to war and environmental devastation. How the Church responds to this ongoing crisis is going to make a great difference to its witness in the world, and Pope Francis is taking a strong lead. To talk about the “great act” of the past two years as though Francis has done nothing especially noteworthy aside from arguing with a few conservative cardinals about communion is to miss some of the most important things he has done.

Pope Francis’s Year of Mercy underscored the most basic point that shines through all these initiatives: we must show mercy to others. As for the “next act,” it’s no mystery. If Synods are considered a “drama,” we already know what the next act will be: the Synod on Young People, the Faith, and Vocational Discernment is scheduled for October 2018.