What do people see when they see Francis? 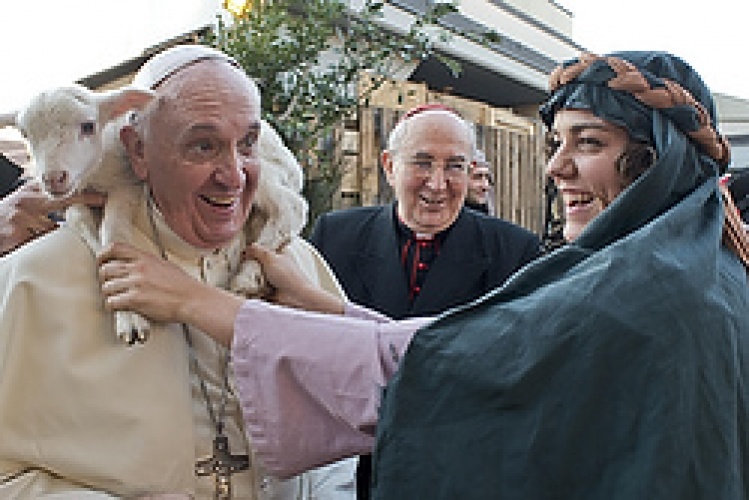 The question posed in that headline is a paraphrase of one used by James Carroll in a new interview in which he discusses how Pope Francis is effecting a potentially “radical” change in how the Church is viewed by the world. “What do people see when they see you?,” according to Carroll, is the question Francis has, at least figuratively, put to his fellow clerics in seeking to emphasize simplicity and draw attention to the plight of the poor – and in the process do some much-needed image improvement at the institutional level.

Is it working? And are the pictures, images, and accounts of this papacy perhaps more carefully crafted and less spontaneous than they seem?

The answer to the first question, at least according to Carroll, is yes—mainly. There are tangible innovations like the survey on family life being conducted in advance of the synod this coming fall, which in asking for information on issues like contraception and divorce and remarriage “signals a shift already underway” in the way power may be exercised. There are the less tangible qualities attaching to the man himself—whose capturing of the world’s attention, Carroll says, can be explained by the fact that he “represents an ancient human need, an ancient human longing for symbols and signs of the mysterious experience we all have of life on this planet.” The only thing marring this picture is Francis’s response to the sexual abuse scandal, which Carroll describes as a disappointment and quantifies as “all too little.”

The answer to the second question is also yes, says Mary E. Hunt in a piece at Religion Dispatches titled “The Trouble With Francis: Three Things That Worry Me.” Things one and two are what she sees as the immutable hierarchical structure of the church and the status of women and gay people. Thing three is what, in an otherwise unsurprising critique, caught my attention: “the remarkable, even enviable public relations success, not to say coup, that the papacy of Pope Francis represents.”

I am not suggesting that there is no substance to Francis’ agenda, that change does not underlie it. Conservatives would not be so hot under their collective collars if that were not the case. But I am cognizant of the very powerful public relations machine that has turned an ecclesial ocean liner on a dime, transformed an all but written-off patriarchy into one of the most inviting, benevolent monarchies the world has seen in modern times….

Surely some of the “credit” for this PR blitz goes to former Fox News and Time writer, Opus Dei member and Midwestern Catholic, Greg Burke. He became senior communications advisor to the Vatican’s Secretariat of State in June 2012, well before the new pope took over. Mr. Burke is commonly associated with moving the papacy toward a more hip, social-media savvy approach to getting out its word. It works. Papal tweets are new. But more important than 140 characters at a time are the remarkable visuals, photo ops that don’t quit, moving gestures of a humble, caring man projected for the world to see and imitate. Only a craven critic would pass over these as trivial.

David Gibson wrote here about Burke and Pope Benedict’s then-new Twitter account just over a year ago, noting the early growing pains and concluding that “there’s no better communications strategy than having a good product to sell.” How much has changed since then? Many would say there’s a better product to sell. How much is a communications strategy helping in selling it? And how much faith should be placed in, or attention paid to, images like the one in this post? What are we seeing when we see this pope?