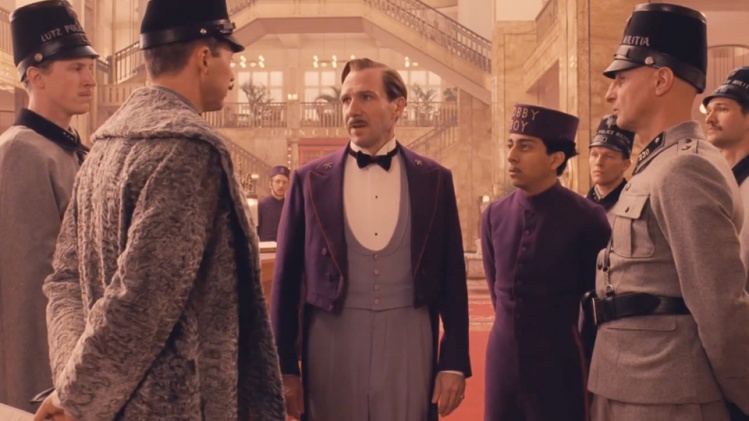 Since most of Wes Anderson’s The Grand Budapest Hotel is set in Eastern Europe between the two world wars, with that era’s turbulence represented by fascist troops closing and patrolling borders, one might conclude that the new movie is an atypical work for this filmmaker—a far cry from his usual apolitical stories about the whimsical friendships and neurotic families of upper-middle-class Amercians. But actually it’s just a case of plus ça change, plus c’est la même chose. The pernicious politics of the era is kept well in the background and doesn’t affect the main action until the very end of the movie. For the most part, Anderson has simply advanced further into Andersonland, a quaint but somewhat treacherous country where adults comport themselves like bright, cosseted children playing games according to their own secret rules and suffering poignant, often painful consequences.

Monsieur Gustave (Ralph Fiennes), the concierge of the eponymous hotel in the mythical country of Zubrowka, is bequeathed an invaluable painting by an elderly aristocrat, Madame D. (Tilda Swinton), whom he’s been sexually gratifying for years—as he has many other rich elderly women. After she dies under mysterious circumstances, Gustave and his adolescent protégé, a “lobby boy” named Moustafa whose nickname is Zero, impulsively snatch the painting to save it from the clutches of Madame D.’s murderous relatives. An adventure story ensues, one that includes murders, false arrest, the most fanciful prison break ever filmed, a youthful romance between Zero and a plucky confectioner, a death-defying sled chase near an Alpine Capuchin monastery, a three-way shootout in the hotel, and several other scenes that wouldn’t be out of place in a James Bond thriller. But Anderson remains Anderson throughout, and the exotic settings and genre set pieces are stylized to fit his peculiar fairyland. Imagine a Graham Greene or Eric Ambler thriller rewritten by Lewis Carroll. Imagine a melodrama enacted within a giant Fabergé egg.

Anderson’s style—enabled, as usual, by the cinematography of Robert Yeoman—is evident everywhere, even in the shifting dimensions of the film’s frame. The main story, which takes place in the early 1930s, is narrated in the 1960s by a now-aged Zero (F. Murray Abraham) to a writer (Jude Law). Anderson frames the encounter between Abraham and Law within the horizontally long “letterbox” aspect ratio familiar to moviegoers since the invention of CinemaScope. But the scenes from the 1930s are all in the format of the pre-CinemaScope era, with more height than width. Thus we watch this tale of long-gone Austro-Hungarian elegance on a cinematic canvas that is itself an artifact of nostalgia.

Aside from this clever (and appropriate) technical innovation, Anderson’s familiar visual and dramatic tics are here in abundance: the dead-on close-ups reminiscent of Diane Arbus but without her mordancy; the mock solemnity of the acting italicizing the mock naïveté of the dialogue; the rapid-fire speeches delivered by characters dashing down hallways or through lobbies; bit-part actors placed far in the distance or at the periphery of a shot to perform cute comic business while the lead characters speak in center-screen close-up. But these coy mannerisms, often hard to digest in contemporary American settings, are very much in keeping with the period this film is set in and the extravagance of its characters—especially the dandified, preening, supersensitive Gustave. Likewise, this film’s dialogue, just as arch as that of earlier Anderson films, seems right when we hear it from a man like Gustave, who is accustomed to using flowery language to stroke the sensibilities of his customers and aristocratic bedmates.

This role is superbly written and even more superbly acted by Ralph Fiennes, who brings to it a zest and precision that surpasses everything else I’ve seen him do. Gustave is one of the most original movie characters of all time: effeminate (by American macho standards) yet brave even in moments of physical danger; an aesthete capable of the most ruthless practicality (he gushes on receipt of Madame D’s gift, then immediately resolves to sell it rather than have the villains get it back); an occasional hysteric who also has the toughness to traverse Eastern Europe in pursuit of justice. Fiennes’s needle-sharp voice and lightning-fast ability to shift from superciliousness to steely resolve help make Gustave an oddly agreeable hero for our time—the metrosexual as Noble Knight. He is always believable even when the story isn’t.

Of course, we can forgive outrageous plot twists in a melodrama or farce (and Grand Budapest is both) but not when they violate consistency of characterization or just plain common sense. This movie goes over the line now and then. When a lawyer (played by Jeff Goldblum) realizes he’s being trailed by a hired thug (played by a quietly fearsome Willem Dafoe), why does he get off a tram only to enter a dark museum at closing time, where he’s bound to be more vulnerable? Answer: The director wants to film the pursuit down shadowy hallways amid suits of armor and sarcophagi. His visual cleverness has betrayed his sense of narrative. And why does he weaken his story with two unnecessary framing devices? First, we witness a tribute at the grave of a renowned writer in 2014. Then, in 1985, we meet that same writer (played by Tom Wilkinson), who gives us a lecture on the sources of fiction, and this takes us to the one really effective framing story: the meeting in 1968 of the writer in his youth (Law) and the elderly Zero (Abraham) in the Budapest Hotel. There, at last, we hear Zero tell the film’s main story. Why all the preliminary fussing? Anderson seems to be indulging a fondness for the Russian-doll approach to storytelling, but this gives unnecessary emphasis to the writer who, properly, should only exist as a proxy for the audience—someone to hear Zero’s story. And when Abraham, a very expressive actor, is replaced by Tony Revolori as the younger Zero, there is a sense of letdown, as Revolori was evidently directed to keep his face blank and to speak in a near-monotone. This is meant to produce the kind of deadpan comedy Anderson favors, but, because Revolori is onscreen for most of the film, the result is wearisome.

But then, that’s Wes Anderson for you—always true to his whims, whether they help his movies or not. I consider him one of the bright lights of American filmmaking, and, overall, The Grand Budapest Hotel reinforces my admiration for him. But there are moments when I wish he’d grow up.

Published in the May 16, 2014 issue:
View Contents
Tags
Movies