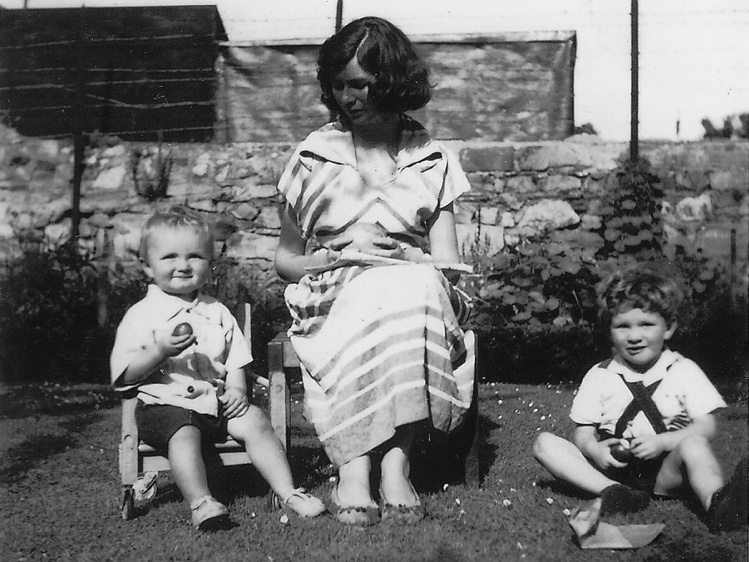 Edna O’Brien sits with her children, Carlo and Sasha Gebler, in 1959. (Edna O’Brien/Little, Brown and Co.)

Earlier this year I wrote about discovering the novelist Edna O’Brien’s brief memoir, Mother Ireland, which she wrote in the 1970s. I was especially taken by her description of rushing off as a young woman to Dublin’s Croke Park stadium, “rain, hail or snow,” to watch games of Irish hurling. For the uninitiated, hurling—which is Ireland’s national sport—combines elements of soccer, lacrosse, and rugby. “We would always arrive hours early and already out of breath at the anticipation of the game, of watching various heroes slithering around scoring points or goals, even sometimes getting livid with each other on the pitch and resorting to fists,” she wrote. “The pleasure was something not far removed from physical ecstasy.”

In the October 14 New Yorker, Ian Parker has a long profile of O’Brien, whose early books were banned in Ireland for their sexual candor and criticism of Irish culture, and who is still writing at eighty-eight. Born into rural and humble circumstances in the west of Ireland, she became something of a literary celebrity in London, famous or notorious for her beauty, parties, and romances in the 1960s and ’70s. Winningly, at least to me, she still appears to be an avid sports fan. “Her ideal TV viewing is European club soccer,” writes Parker. “When we first spoke on the phone, we discussed Barcelona’s underpowered performance on a recent visit to Liverpool. ‘Messi looked like someone who just came out of a badger burrow!’ she said. ‘And I love Messi.’” Lionel Messi is widely regarded as the best soccer player in the world, and Barcelona is known for playing an especially artful style of the game. “Badger burrow,” used to describe a soccer player’s performance, is the sort of striking and witty language that O’Brien is prized for. Parker provides other examples. Urged by the writer Thornton Wilder to put more of her humor into her writing, O’Brien told him “you’re not going to part me from my sorrows.” Arriving for a meeting at T. S. Eliot’s former apartment in London, O’Brien is mistakenly told she has come to the wrong address. “I’m approaching a heart attack,” she later recalls when describing her anxiety during the incident. “We have arrived jangled—jangled.”

The welter of memory, packed into a single lonely and bereft moment, is the strongest ally a person can have.
sharetweet

One of the charms of Mother Ireland, along with O’Brien’s lyricism, is her use of unusual words and phrases, many of them presumably familiar to the Irish but not to me. It’s like wandering into an enchanted forest where words cast spells. Here are just a few: “cantreds,” “without unction,” “gombeen,” “the belling of the stag,” “trams of hay,” “furze bush,” “occultation of feeling,” “might tirade about something,” “togged out,” “to do a flit,” “stood at the casements,” “holding their swallow,” “hawing on it,” “barmbrack,”  “money was the bogey,” “gabbling.” It’s possible to figure out what many of these words mean from the context, but not all. A gombeen, for instance, is a money lender. Cantreds are settlements. To haw means to call an animal. If you are indulging in an “occultation of feeling,” you are hiding your emotions.

If the New Yorker profile is any indication, hiding her emotions or her opinions is not something O’Brien often feels compelled to do. Her most recent novel, Girl, is about a young Nigerian woman captured and raped by Boko Haram. Some critics have objected that the novel indulges in an impermissible act of cultural appropriation. “It has been suggested to me that as an outsider I am not eligible to write this story,” O’Brien has said. “I do not subscribe to that devious form of censorship.”

In the New Yorker piece, O’Brien describes her long life as one of “loneliness and brooding—and reading.” Her youthful marriage to Ernest Gebler, an older Irish writer, ended not long after her first novel, The Country Girls, was published. After reading the manuscript, Gebler told her, “You can write and I will never forgive you.” O’Brien never remarried. “I embraced disappointment. Maybe not embraced it—I endured it, and I lived it,” she tells Parker.

This echoes a passage in Mother Ireland describing O’Brien’s discovery of her need to write. “I had by chance found Chekhov and found the truest voice that I would ever know,” she remembers. “Found the nourishment of reading and perhaps writing. I believe that memory and the welter of memory, packed into a single lonely and bereft moment, is the strongest ally a person can have.”

The Story Behind 'Nostra Aetate'