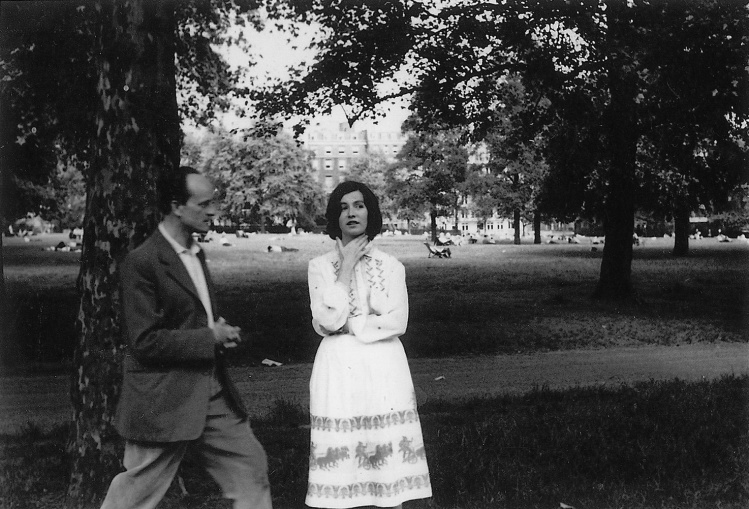 Edna O'Brien with her husband, writer Ernest Gebler, in London in 1959 (Edna O'Brien/Little, Brown and Co.)

In early July 2017 we took a family trip to Ireland. It was our first family trip, and our first visit to Ireland, and it has spoiled me for other adventures. There were eight of us, including our redheaded, blue-eyed granddaughter, who celebrated her first birthday in Galway.

My maternal great-grandmother, Annie Mary Curley, was born in Galway, married Dennis Linnehan, an American, and moved to Newton, Massachusetts. There she gave birth to my grandfather and his sister, and died in 1897 in childbirth at the age of twenty-seven. The infant, a second girl, died several months later. (This was discovered only recently, thanks to some genealogical research on the internet.) Despite my Germanic surname, almost all my ancestors were Irish, or at least that is what my 23andMe profile rather incredibly reports. I don’t seem to have any DNA that can be traced to Continental Europe. This would not surprise you if you knew my mother, though it might if you knew my father’s admiration for German order and efficiency.

Ireland was wonderful, especially the time we spent in the west on the Dingle Peninsula in a many-windowed house that looked out on the Blasket Islands and the tumultuous Atlantic. We were ferried to the Great Blasket, where Irish was spoken right up until the island was abandoned in the 1950s. Some of the crumbling stone cottages that dimple the island’s nearly vertical landscape are being restored as tourist attractions. The views are dramatic and the ruins humbling. But how people could have lived there for centuries boggles the mind, since you need the stamina and agility of goats, or the blind obedience of sheep, to manage its insanely steep terrain.

We had flown into Dublin, rented three cars for the three families involved in the pilgrimage, and checked in, jetlagged, at the Croke Park Hotel. As it turns out, Croke Park is famous for two things. Across the street from the hotel sits the colossal Croke Park stadium, home to the Gaelic Athletic Association. The stadium, the third largest in Europe, seats more than eighty thousand. On Sundays it usually hosts a game of hurling, an ancient and wildly popular sport that seems to be part soccer (there are goals and goalies), part lacrosse (the players use wooden sticks to pick up the ball, and to carry or hit it), and part rugby (you can also score by batting the ball between elevated goalposts). Hurling has deep cultural significance for the Irish: some form of the game has reputedly been played on the island since prehistoric times. Croke Park is also infamous for being the site of “Bloody Sunday,” when British soldiers, in retaliation for murders committed by Irish revolutionaries, killed fourteen unarmed civilians during a match on November 21, 1920.

As it happens, the Leinster Championship final between Galway and Wexford was being played the day we arrived. Curious about the enormous crowd and the sport, we bought tickets and climbed unsteadily to our seats in the nosebleed section. The first thing that strikes you about hurling is how vast the playing field is, usually 150 yards long and 100 yards wide. There are fifteen helmeted players on each side, and each squad was led onto the field by a marching band. The hurlers seemed to be able to effortlessly bat the ball eighty yards at a time. It’s a contact sport, and things can get belligerent. Just as fascinating as what was happening on the pitch was the enthusiasm and tribalism of the crowd. We were surrounded by Galway fans, young men and women who seemed to be on dates, who had traveled quite a distance, and who rooted passionately for their team. Watching a sport one can just barely understand while seated among a knowledgeable and boisterous group of devoted fans is actually a lot of fun. The romance of sport, especially for the young, brings back many fond memories for someone like me, who spent a good deal of time as an adolescent and young adult pursuing ambitions on the playing field.

Hurling, like O’Brien’s complicated love of her native land, is just the beginning.
sharetweet

A few months ago I came across Mother Ireland, a slim volume by the novelist Edna O’Brien, who grew up in the west of Ireland. O’Brien became famous in the early 1960s when her first novel, The Country Girls, was banned by Irish authorities. The novel was judged too sexually explicit and too critical of Irish society. O’Brien—who is still alive, and evidently still writing, at the age of eighty-eight—went on to a much-heralded career. Predictably enough, she was eventually honored by the Irish government for her writing.

Mother Ireland, written in 1976 but only published here in 1999, is both a memoir of her youth and a meditation on the spell the island nation can cast. Ireland’s history and landscape, its glories and perversities, are both scrutinized and celebrated. Catholicism comes in for some honest and sharp-eyed condemnation, but also some astute appreciation. O’Brien writes, for example, of how she was taught that “to be good was to be pure, and yet the prayers had the glandular desperation ascribed to human love.”

I haven’t read O’Brien’s other works, but was quite enchanted by these lyrical recollections. “The Irish were so often on the verge of the victorious, when fate, a fresh enemy, bungling, weariness or inner treachery altered events,” she writes of the ever-present past. “So we were told in the classroom day after day, year after year, and so subconsciously we developed our notions of destiny and all its vicissitudes.”

O’Brien is a master sentence-maker, and a beguilingly honest confessor of her dreams, longings, and sins. There is much to say about this little jewel box of a book, and I hope to write more about O’Brien’s memoir and our trip to Ireland. But let me end now with a lovely bit of serendipity, by confessing my surprise and delight when I came across O’Brien’s description of her youthful infatuation with the heroes of Irish hurling and her own giddy pilgrimages to Croke Park.

After finishing her convent education and discarding an adolescent ambition to become a nun, O’Brien moved to Dublin in the late 1940s to train as a pharmacist. “It was Croke Park for a hurling match on Sunday, rain, hail or snow,” she writes about herself and her girlfriends. All the “good catches” were “hurly” players. “We would always arrive hours early and already out of breath at the anticipation of the game, of watching various heroes slithering around scoring points or goals, even sometimes getting livid with each other on the pitch and resorting to fists,” she writes. “The pleasure was something not far removed from physical ecstasy.”

There is plenty of ecstasy, plenty of shame, plenty of humor, and plenty of beautiful writing in Mother Ireland. Hurling, like O’Brien’s complicated love of her native land, is just the beginning.