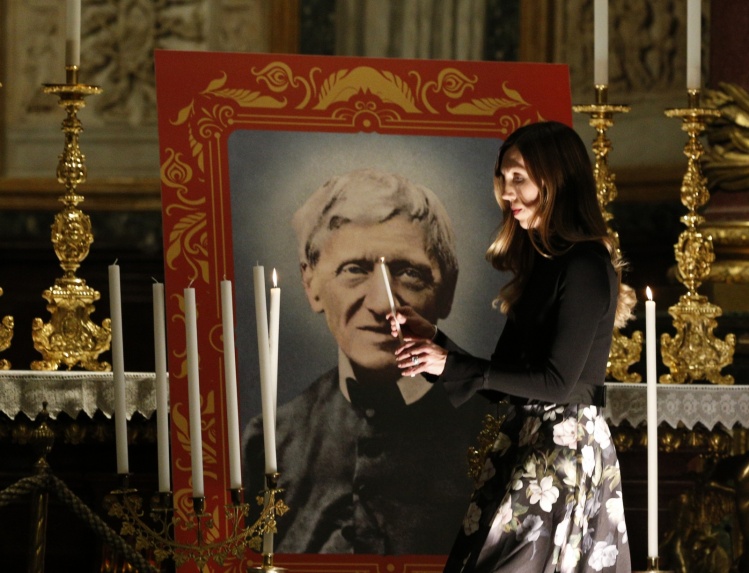 Melissa Villalobos of Chicago lights a candle during a vigil in advance of the canonization of St. John Henry Newman, at the Basilica of St. Mary Major in Rome Oct. 12, 2019. (CNS photo/Paul Haring)

John Henry Newman, who was canonized last Sunday in Rome by Pope Francis, is the most intellectually and culturally significant addition to the church’s calendar of saints in centuries. His literary reputation is international; his major books like An Essay in Aid of a Grammar of Assent and The Idea of a University are never out of print. Nonetheless, Newman’s path to sainthood was highly improbable. Indeed, if it weren’t for American Catholics he might never have been canonized at all.

A brilliant preacher and a leader of the Oxford Movement within the Church of England, Newman’s conversion to Roman Catholicism in 1845 at the age of forty-four enraged English Protestants, prompting Newman’s classic spiritual autobiography, Apologia Pro Vita Sua. It also cost him his deepest personal friendships—his sister refused to speak with him again—and expulsion from his dearest institution, Oxford University, which at that time still barred “papist” students and professors.

Newman’s first few decades as a Catholic brought mostly misery. “As a Protestant I felt my religion dreary, but not my life,” he confided to his diary, “but as a Catholic, my life dreary, but not my religion.” The majority of Catholics in England at the time were poor, undereducated Irish immigrants governed by conservative bishops who regarded their celebrated convert with suspicion. He criticized the dogma of papal infallibility as untimely and unnecessary when it was defined by Vatican Council I in 1870 amid much controversy. He would, he quipped, drink a toast to the pope, but only after toasting conscience first. His conviction that Catholic doctrine had developed over time and is thus historically conditioned was one of many of his positions that were deemed unacceptable under several subsequent popes but were officially embraced seventy-five years later by Vatican Council II.

Despite his controversial theological stands, by the end of his life Newman had won favor in Rome as well as England—including, at age seventy-seven, a cardinal’s hat. At his death upwards of fifteen thousand people accompanied Newman’s body from the Birmingham Oratory, which he had founded, to his grave seven miles away. The Times of London was not alone among British publications in noting Newman’s suitability for canonization.

To call Newman a theologian is to limit his intellectual range.
sharetweet

Why, then, did it take more than 125 years to proclaim Newman a saint? There are a number of reasons. One, certainly, is that the English Catholic Church at the time of Newman’s death had just emerged from legal suppression dating back to the reign of King Henry VIII: it had neither the resources, the leadership, nor the pedagogical know-how to pursue anyone’s canonization.

Another was cultural. English Catholics typically do not indulge the cult of the saints with anything like the zeal of Catholics in southern Europe. “Awful nuisance,” is the way one member of the Birmingham Oratory put it in 1986, when the community realized that if Newman was declared a saint, they would have to put his remains on display for pious pilgrims who wanted to venerate his relics.

But the chief reason Newman’s canonization took so long is simply that he wrote so much. To call him a theologian is to limit his intellectual range and the significance that imagination as well as reason played in his understanding of religious faith. He was that more comprehensive figure, a Christian humanist in the mold of Erasmus, a superb literary stylist whose output of letters (twenty thousand), books, essays, sermons, poetry, hymns, and two novels already ran to ninety volumes when I visited the Oratory back in the 1980s. And then there were between fifty thousand and seventy thousand letters to and about Newman written during his lifetime, which also had to be scrutinized, not to mention the tens of thousands of letters, biographies, and autobiographies written after his death to be mined for evidence that Newman enjoyed a posthumous reputation for holiness—a requirement for canonization. Pope Paul VI, a highly cultured Italian, was a huge fan of Newman’s work and had hoped he could beatify the Englishman (the penultimate step before canonization) in 1975. But by the time the commission in charge of Newman’s cause delivered up its staggering 6,483 pages of documentation, Pope Paul had been dead sixteen years.

While Newman himself admired many saints, he was not impressed by the church’s saint-making process. He was particularly critical of the way the positio (the final text on which the candidate’s virtues are judged) dismembers a saint’s life into discrete proof-texts. “They do not manifest a Saint,” he wrote, “they mince him into spiritual lessons.”

Neither did Newman imagine that he himself would ever be regarded as a saint. “I have nothing of a Saint about me, as everyone knows,” he wrote while working on his first novel. “Saints are not literary men, they do not love the classics, they do not write Tales.” Newman certainly was “a literary man”: he is still remembered as one of the great prose stylists of the nineteenth century.

But Newman was not canonized because of the elegance of his writing, or even because of his brilliantly argued defense of the church he joined. Excellence of intellect is not proof of holiness. On the contrary, it was Newman’s profound humility—manifest especially in his patient endurance of the lack of appreciation for, and underuse of, his talents by the bishops of his adopted church—that counted most when Vatican officials judged his cause. That and his dedicated pastoral work with the ordinary folk in the Oratory’s Birmingham neighborhood.

Even so, without his very public life as a religious thinker and his literary achievements, it is unlikely that anyone would have thought Newman a saint. In fact, these were the reasons why he was widely known, especially in North America, where the push for his canonization finally took hold. The first cards with a prayer to be said in support of his cause were printed and distributed in 1935 at the direction of the Archbishop of Toronto. Six years later, America, the Jesuits’ weekly magazine, stirred a public clamor for Newman’s canonization by running letters in support of it for four straight months. And when a formal cause was finally introduced, the church official appointed to steer the cause to completion was an American Jesuit who had edited a volume of Newman’s letters for his doctoral dissertation at Harvard.

For decades Newman’s intellectual admirers argued that his splendid prose should itself be considered a miracle worthy of a saint.
sharetweet

Despite all this, Newman’s cause remained hobbled by a major handicap: his supporters lacked a posthumous miracle attributed to his intercession, which the church requires as confirmation from God that the candidate is truly with Him in heaven.

Newman’s problem was that the Catholics who admire his prose and the fineness of mind usually are not the sort of Catholics who pray for miracles in times of need, while those who do pray for miracles typically do not address their pleas to saintly figures known chiefly for how well they think and write. Indeed, for decades Newman’s intellectual admirers argued that his splendid prose should itself be considered a miracle worthy of a saint.

Again, it was Americans who ended up supplying the required miracles. The first, from Massachusetts, was accepted for his beatification in 2010. The second occurred three years later in the Chicago area and was made known earlier this year. The subject is Melissa Villalobos, a Northwestern Law School graduate who, in 2013, was pregnant with her fourth child when she began bleeding from what doctors determined was a blood clot wedged between the placenta and the uterine wall. This condition imperiled the life of both mother and unborn child, and her doctors had no medical or surgical solution. At one point, when Villalobos found herself lying in a widening pool of blood on her bathroom floor, she prayed to Newman, to whom she had developed a strong devotion. Within minutes the hemorrhaging stopped. Days later her doctors told her that she and her child were medically safe—and that they could not explain the sudden and complete healing. Neither could the teams of doctors who examined her case for the church’s canon lawyers.

Newman had his miracle, but in a way the priests and brothers of the Birmingham Oratory also had their own answered prayers. When Newman’s tomb was opened for the examination and transportation of his bones to the Oratory, all that was left of his mortal remains was a handful of dust.

Kenneth L. Woodward, former Religion Editor of Newsweek, is the author, among other books, of Making Saints: How the Catholic Church Determines Who Becomes a Saint, Who Doesn’t, and Why. Woodward will be appearing with Fr. Ian Ker and Melissa Villalobos for a public conversation on Newman, sponsored by the Lumen Christi Institute, at Chicago’s Holy Name Cathedral on October 30. 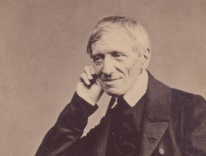