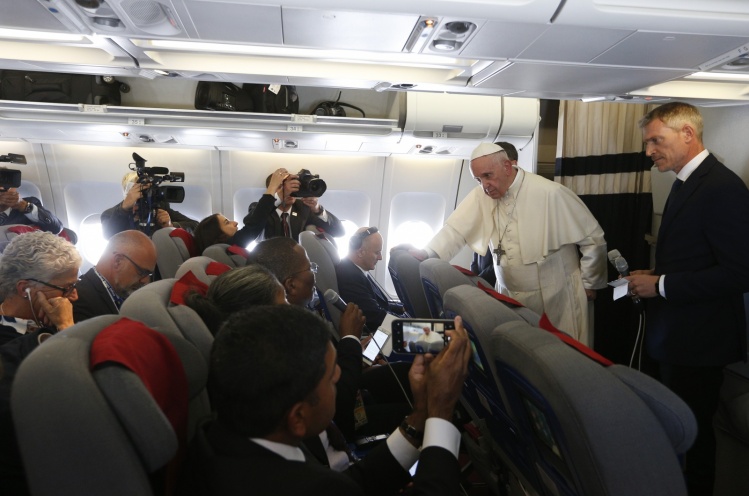 With its advertising base sapped by Facebook and Google, local news reporting is in crisis. It’s hard for local outlets to play the globalized advertising game these giants rule—it’s a system built on getting as many clicks as possible, which is much easier to do with a story of national interest. Reduced news coverage quickly follows reduced advertising revenue. That’s led regional news organizations to divert some of their remaining resources once devoted to local news coverage to rewriting snappy national news stories to get in on the clicks.

In a September 16 audience with Italian journalists, Pope Francis had some advice that might help. No, not the elusive new business model everyone involved in local news is seeking. Rather, more of a moral framework.

For starters, Francis stressed that local news coverage is in no way inferior to national reportage—a good point to make to an audience of journalists. “On the contrary,” he said, “I would say that it is the most genuine and the most authentic in the mass-media world.” The reason is that its “precise mission” is “to immerse oneself in the daily, local reality, made up of people, events, projects, problems, and hopes.” The person-to-person connection makes it more human.

Francis followed this with another reason local news coverage is so important: “The second is to intercept the same reality, to be able to transmit to a wider horizon all those values that belong to the life and history of the people, and at the same time give voice to poverty, challenges, sometimes urgent issues in the territories, along the streets, meeting families, in places of work. But also to give voice to the places and witnesses of faith.”

Good local and regional news coverage informs national coverage. Where it’s weak, reporters who “parachute” in for national news organizations just don’t know as much. For example: statehouse reporting corps have been sharply reduced over the years, which in turn has weakened national reporting on presidential primaries.

Local reporters have a more direct conversation with readers, and that’s what communications is about.
sharetweet

The crisis in local reporting is much-discussed in journalism circles but, according to a Pew Research Center survey, the public is mostly unaware of it. Foundations are stepping up to provide support, and many have pointed to the nonprofit Texas Tribune as a workable business model. Still, it’s not easy to build the audience and base of donor-members that funders look for.

Pope Francis helps by setting a priority for local news. I admit a bias: my twenty-three years in daily journalism were spent almost entirely in local news coverage in New York City (and, for a few years, northern New Jersey). My interest was in covering my hometown; local reporters have a more direct conversation with readers, and that’s what communications is about.

Elsewhere, I’ve criticized the opposite attitude found in a column the then-public editor at the New York Times Liz Spayd wrote in defense of the paper’s diminished coverage of news in the New York region. “Why should a newsroom that just announced lofty international ambitions spend resources covering news of no interest to readers in Beijing and London?” she asked.

One answer is that, as Francis said, local news organizations serve and unify the public by transmitting “the voice of the people” in ways that national media can’t do—they don’t have the same type of personal relationship with their audience. A second is that national and foreign correspondents need to be able to rely on quality local reporting to help them sort out and interpret the facts for a broader audience.

In the United States, readers and viewers express more trust in their local news coverage than in national media. One reason is that local outfits have long been less prone to the inclination to hammer the facts into narratives. Francis alluded to this in remarks to the Vatican press on September 10. “It is extremely easy to move from the facts to narrative and this damages the news industry,” he said, according to Catholic News Service. “It’s important to stick to the facts.”