The Virtue of Staying Put 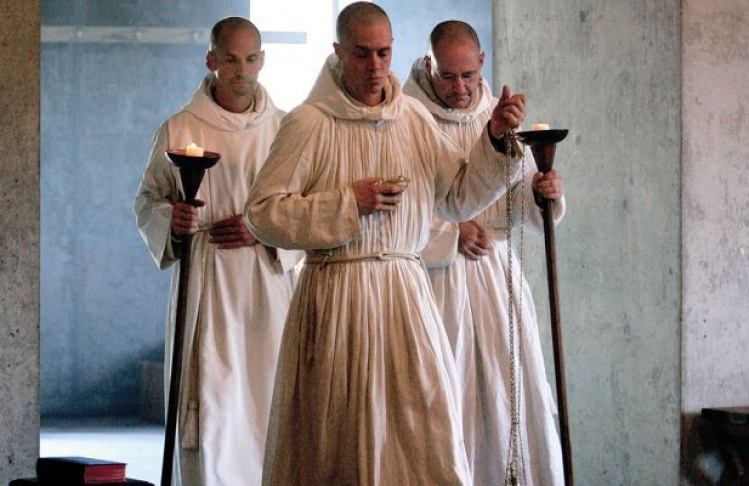 In recent years the term “Benedict Option” has been circulating in certain sectors of the U.S. Catholic Church. For a Benedictine oblate such as myself, this should be a welcome development. After all, the charism of Benedictine monasticism, with its emphasis on faithfulness to flesh-and-blood local communities formed in prayer, liturgy, discernment, and mutual service, can remind all Christians of a basic truth—namely, that no policy we propose for society, no change we seek in the larger culture will be credible unless it grows from the embodied witness of Christian life together. As Gandhi put it, we must “be the change we seek in the world.”

So the Benedict Option, which on the face of it simply calls for an intensification of our commitment to such local communities and to Christian formation, should not be controversial. Yet the phrase has become a rallying cry for something else. Rod Dreher, a prominent blogger at the American Conservative, began promoting the rudiments of the Benedict Option more than a decade ago in his book Crunchy Cons, and will explore it in-depth in an upcoming book on the the subject. The basic proposition is this: American society has become so antagonistic toward Christian values that faithful Christians should turn their primary attention away from the public square, with its fruitless policy debates and doomed culture wars, and instead focus on building local communities, sheltered from the hopelessly fallen larger culture, where Christian values and practices may survive.

To be sure, one does not have to embrace such a dire diagnosis in order to take up a Benedict Option; while only a few Christians will ever play prominent roles in public affairs, many more will find themselves following the Rule of St. Benedict whether they know it or not, simply because their vocation is to witness to the way of Christ by serving their neighbors in ordinary daily life. Nor does a pessimistic reading of the signs of the times, concluding that Christians are losing the culture wars, necessarily dictate retreat. In a recent speech, Philadelphia’s Archbishop Charles Chaput observed bleakly that “the America of the Founders is dead because we killed it,” yet went on to dismiss calls for a Benedict Option in favor of Augustinian duties to the City of Man as well as the City of God.

There is no doubt, however, that many who currently advocate for the Benedict Option do envision precisely this kind of retreat. What’s troubling about such advocacy is that too often it overlooks what is most Benedictine about the Benedict Option, and not, in fact, optional at all: the imperative of all Catholics to stay together, both in global communion and in face-to-face relationships, even when those relationships are hard. In fact the provenance of the term “Benedict Option” offers at least some hope that it might actually fashion a meeting ground amid U.S. culture wars, rather than yet one more point of contention. The idea behind it traces to philosopher Alasdair Mac-Intyre’s magisterial diagnosis of what he considered the incoherence of modern philosophy, and its corresponding failure to guide society toward any real vision of the good. In After Virtue (1981), MacIntyre posited that we are living in a dark age governed by barbarians, and would do well to stop trying to shore up the imperium; instead we should invest in new forms of moral community while we “await another—doubtless very different—St. Benedict.”

Interestingly, MacIntyrian localism has not aligned neatly with standard left/right polarities. Yes, some Catholics and former Catholics such as Dreher (who was raised as a Methodist and converted to Catholicism before finally joining the Orthodox Church) promote the Benedict Option out of dismay over issues such as same-sex marriage or alleged federal encroachments through Obamacare. Yet among the first and most prominent voices citing MacIntyre’s call were Catholic students of the Methodist ethicist Stanley Hauerwas, who were animated by a left-leaning critique of war, militarism, and American empire. From that circle emerged one of the most notable examples of groups prompted by MacIntyre and inspired by St. Benedict in fresh ways, the New Monasticism movement among young Evangelicals. When Dreher asked one of its leaders, Jonathan Wilson-Hartgrove, what others can learn from the patron of historic monasticism in the West, Wilson-Hartgrove bluntly replied that “Benedict saved me from the Religious Right.”

In any case, the question of whether the Benedict Option necessarily entails a retreat from public matters depends not so much on what we are leaving or resisting in doing so as on what we do once we go deeper into our locales. Withdrawal into self-selected enclaves of the like-minded is hardly a countercultural action in our polarized society, as Bill Bishop has demonstrated in The Big Sort: Why the Clustering of Like-Minded America is Tearing Us Apart. What is countercultural in the United States today is attempting to stay in relationship with people who don’t share our views. Yet it is important to do so, and especially for Christians. Only by listening hard and differing charitably in face-to-face relationships can we develop practices and virtues in which attention to building up local communities can nurture robust public engagement. Such communities and those who speak for their moral commitments may then do so with integrity because they have grounded their work and witness in what we might call proof-of-concept living.

This way of living is the Gospel imperative that Benedictine monastics actually follow, through the particular disciplines that flesh out their vow of stability. What makes Benedictines unique among religious orders is precisely this vow of stability and the practices it entails for monks as they commit to living the rest of their lives in one place, within one community. Whatever other spiritual practices they may have developed (liturgy of hours, lectio divina) or borrowed (Ignatian self-examination), monks in this tradition embrace community life itself as the most basic of their spiritual disciplines. Continuing to live together with people whom one cannot simply “unfriend” exposes self-deceptions and wears off uncharitable rough edges like nothing else.

Unique as the Benedictine vow of stability may be even among Catholic religious orders, something about it is necessary for all Catholics. Indeed, I view the practice of “stability writ large” as the very genius of Catholicism itself. Unlike participating in other forms of Christianity, being Catholic necessitates a refusal to leave in protest when the going gets tough, or to start a new church, or to shop around for another identity, or to bandy about threats of schism. In this sense, to leave Catholicism in favor of another high-church communion such as the Eastern Orthodox is fundamentally a Protestant act. It’s my view that Protestants themselves will need to unlearn those tendencies if they hope to build sustainable Christian communities in the future.

WHEN I MADE THESE arguments in Unlearning Protestantism: Sustaining Christian Community in an Unstable Age, I did so as a gift to my Protestant and neo-Anabaptist friends, though I also hoped I might buttress loyalty and respect for tradition among liberal Catholics. Little did I imagine that loose talk of schism and sneering disrespect for the pope might increasingly come from conservative quarters. New York Times columnist Ross Douthat may be more restrained than others in the conservative Catholic blogosphere, but even he channels its vitriol with jabs at the “ostentatious humility” of Pope Francis and dark warnings that Francis is the “chief plotter” in a conspiracy to change Catholicism that could eventually lead to schism.

We live in a culture profoundly shaped by Protestant individualism. In this culture, abandoning institutions is the default strategy for protesting and remaining untainted by injustice. So perhaps no one should be surprised that such “habits of the heart” (to use sociologist Robert Bellah’s label) have migrated and displaced the Catholic genius for staying put. Douthat himself ably diagnosed these individualistic habits in his 2012 book, Bad Religion: How We Became a Nation of Heretics—and endorsed the Benedict Option as a possible response. And well it may be. But it needs the Benedictine imperative lodged firmly inside it. A Benedict Option will never help reduce or even slow the sorting-out into enclaves among Catholics if it serves as just another battle cry in our culture wars. The option will only be truly Benedictine, and deeply Catholic, if it accepts the Benedictine imperative to hang in there with one another, and in communion with the global church, even—and especially—when that requires healthy, honest conflict.

Lacking this imperative, the option of resolving church conflicts by departing from communion becomes all too tempting. Yet that is precisely what appears to be happening when Dreher cites concrete examples of families and communities embracing the Benedict Option not only because they are disillusioned with American culture, but because they are disappointed with the Catholic Church in America. And reassurances that the Benedict Option need not imply complete withdrawal from the public square are hardly convincing when they issue from those whose disaffection with other Catholics, or even the church itself, suggests an even more portentous withdrawal.

Consider what could happen if we were to fully embrace the Benedictine imperative—which actually is just the Gospel imperative to love our neighbors even when they are in some ways our “enemies.” Liberals sympathetic to the anxieties of parents raising children in a confusing world would have to recognize the legitimate need for boundaries and tradition, while conservatives who deepen face-to-face relationship with those in troubled marriages and with the abandoned and divorced would find it harder to dismiss the idea of allowing remarried Catholics to receive Communion as merely a surrender to the sexual revolution. Liberals opposing militarism or gun culture or anti-immigrant sentiment might find themselves framing alternative policy proposals as ways to enhance true security, while conservatives who oppose abortion might give greater attention to the economic conditions and welfare policies that would make it easier for struggling women and couples in crisis to imagine continuing a pregnancy. And over time—who knows?—sustained interpersonal engagement might make it possible to drop the scare-quoted categories of “liberal” and “conservative” altogether.

Apart from the larger implications, each of us would necessarily begin to eschew the temptation to hunker down in our gated thought-enclaves and tweet out our arguments like hand grenades tossed over the walls. Instead we would treat disagreement and conflict in ways appropriate to the prudence and charity that the practice of the Benedictine imperative teaches. We need the Benedictine imperative, in other words, not as a last resort “after virtue” or after any other surrender, but as a first resort on the way to virtuous and civil Christian discourse. We can redeem the Benedict Option by embracing and practicing the Catholic stability that Catholics themselves have too long taken for granted.

Gerald W. Schlabach is professor of theology at the University of St. Thomas in Minnesota and author of Just Policing, Not War: An Alternative Response to World Violence (Liturgical Press).