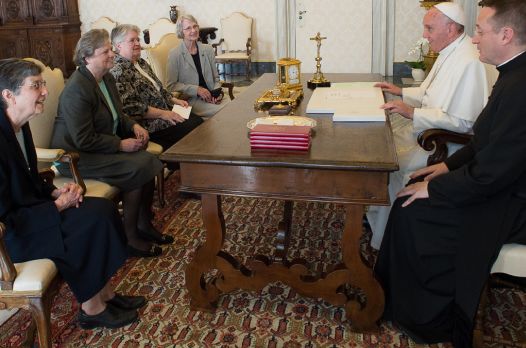 That’s one of the responses to the unexpected news today that the Vatican has ended its three-year oversight of the Leadership Conference of Women Religious. Quoted in an AP story, Christopher Bellitto, a church historian at Kean University in New Jersey, “called the announcement a complete vindication of the sisters' group and American nuns in general. ‘Anything coming out of the Vatican this morning is nothing other than a fig leaf because they can't say “oops” in Latin.’”

David Gibson at RNS calls the end of the “controversial investigation of American nuns” a “face-saving compromise that allows Pope Francis to close the book on one of the more troubled episodes that he inherited from his predecessor, Benedict XVI.”

Josh McElwee at NCR characterized the announcement as a “curt and unexpected end” and quoted from LCWR president Immaculate Heart of Mary Sr. Sharon Holland’s statement “that the oversight process brought the sisters and the Vatican to ‘deeper understandings of one another's experiences, roles, responsibilities, and hopes for the Church and the people it serves. … We learned that what we hold in common is much greater than any of our differences.’” And from Cardinal Gerhard Muller, prefect of the Vatican doctrinal congregation: “[H]is congregation is ‘confident that LCWR has made clear its mission to support its member Institutes by fostering a vision of religious life that is centered on the Person of Jesus Christ and is rooted in the Tradition of the Church.’”

Fr. James Martin in a Facebook post: “The LCWR agreed to implement some changes, mainly regarding speakers and liturgies at its annual conventions. But overall, the operations of the LCWR remains intact ….  In the end there is one thing to say to the Catholic women who have worked so hard in the Lord's vineyard: Thank you, sisters.”

It's a tough day for people who think sisters should be seen (in full habits) and not heard. #LCWR

LCWR investigation by CDF is over! officers will meet Pope Francis- Alleluia!

"Crucial role?" CDF move has been an outrageous affront to @LCWR_US and women religious in general for years. https://t.co/qaoYBeIHBM