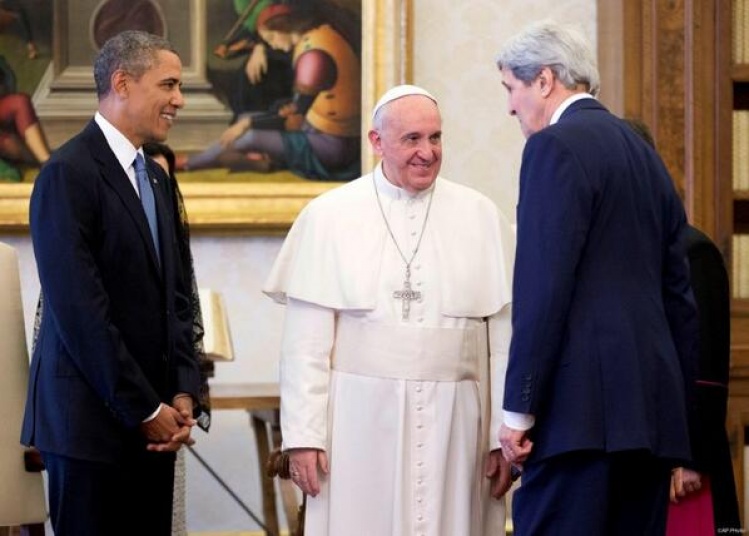 This is a developing story, and both heads of state are about to speak live to give more details. But in the meantime, let's note the amazing fact that Pope Francis directly brokered a diplomatic deal between the United States and Cuba.

WASHINGTON — Pope Francis was instrumental in facilitating the normalization of relations between the United States and Cuba, a senior White House official said Wednesday.

President Obama is expected to announce a deal with the Caribbean nation Wednesday afternoon that will pave the way for the first U.S. embassy on Cuban soil since the Kennedy administration and a relaxing of many of the American economic and travel restrictions on Cuba that have defined the relationship between the two nations for decades.

Francis played a big role in bringing the longtime rivals to the negotiating table, the official said. Francis sent what was characterized as an extraordinary personal letter to Obama and Cuban President Raul Castro over the summer, urging both parties to end their frosty relationship. Following the letter, and the negotiations, Obama and Castro had a phone conversation that helped lead to Wednesday’s announcement.

The letter “gave us greater impetus and momentum for us to move forward,” the administration official said. The Vatican was the only government that participated in the negotiations between the U.S. and Cuba. Vatican officials were “in those meetings,” the official said.

It remains to be seen what the parameters of the deal are.  But what we know now is that the only other government involved was the Vatican, and that the Pope's personal letters catalyzed the process.

It resulted in the release of an American prisoner, Alan Gross, something intimated months ago by Tim Padgett, a journalist specializing in Latin America. But the release on the first day of Hanukkah is almost too good to be true.

With such promising developments in diplomacy, it no longer seems implausible that the Vatican will play a key role in facilitating the closing of Guantanamo. Secretary of State Kerry addressed just this issue in talks with the Vatican earlier this week.

We wait in joyful hope.