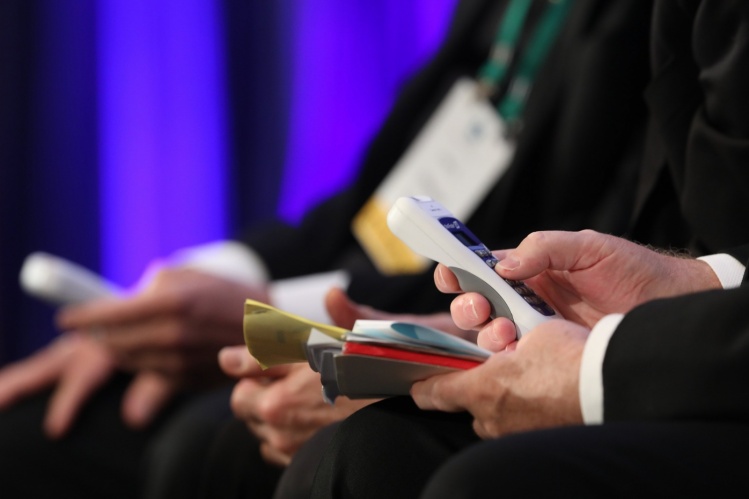 Bishops vote during the 2019 fall general assembly of the U.S. Conference of Catholic Bishops in Baltimore, Maryland (CNS photo/Bob Roller).

There is little question about the importance of this fall’s plenary meeting of the USCCB. For one thing, the conference’s vice president, Detroit Archbishop Allen Vigneron, will not be the favorite in the presidential election because he won’t be a candidate: at seventy-four, he, like all bishops, would be expected to present his resignation on reaching seventy-five. For another, it’s the first plenary since the Supreme Court overturned Roe. Finally, the new leadership will be at the helm through the 2024 U.S. presidential election, when we may learn how much American Catholic support there is for American democracy.

But this bishops’ meeting is important on a deeper level as well. It comes as the Catholic Church is on its way to being, in some ways, a “post-episcopal” Church—no longer a bishops’ Church. And that will likely have a dramatic impact on how Catholicism may influence and interact with American social and political values.

The situation arises from the precipitous drop in vocations. We still have bishops, priests, and deacons, of course, but there’s no way to imagine a Church in which there’s a priest for every parish—except by importing clergy from other countries. Meanwhile, a recent study from the Catholic University of America shows a notable drop in the levels of trust and confidence that priests have in their bishops. This “organizational” schism would be cause for concern in any organization, but especially in a religious one.

Almost two years ago, Pope Francis opened the instituted ministries of lector and acolyte to women, but that has failed to capture the attention of most women who already serve in the Church or would like to. Among bishops, it has sparked even less enthusiasm. The same could be said for the creation of the instituted ministry of catechist by Francis in May 2021. In an evangelizing Church that wants to be all-ministerial, the very idea of ministry is still identified with ordination.

The predicament is even more pronounced for the ministry of bishops. The post-conciliar crisis of the priesthood and religious orders is not surprising, given the perfunctory treatment Vatican II and its final documents gave to those ministries and their role in the Church. But the bishop situation is surprising. Vatican II was not just a council made by the bishops but also in some sense for the bishops: it offered them episcopal collegiality, a new language for local pastoral ministry, more control over diocesan clergy and, especially, over religious orders in their dioceses. The very celebration of Vatican II was evidence that from thereon the episcopacy would not only exist but matter.

The new USCCB leadership will be at the helm through the 2024 U.S. presidential election, when we may learn how much American Catholic support there is for American democracy.
sharetweet

Signs of an episcopal crisis are obvious: the high number of priests who are chosen to become bishops but who decline the appointment; the number of bishops resigning because of burnout; the cases of bishops quietly removed (and without any transparency, especially for the victims) by the Vatican over accusations or for being found guilty of abuse or cover-up.

This also all has significant impact on ecclesiology and Church governance—especially in the United States, as I’ve noted before, where the bishop’s position has become more managerial and bureaucratic. Functioning increasingly like the administrator of a mid- or large-sized firm, or even as a CEO overseeing legal, financial, and PR operations, the modern bishop is more and more at odds with the Patristic and Tridentine model that Vatican II had in mind when writing and approving the decree Christus dominus, as well as the constitution Lumen gentium. Inspiring figures like St. Charles Borromeo, bishop of Milan in the early stages of the application of the council of Trent, commanded a degree of respect in the Church and in the public square that the Catholic episcopate cannot even imagine today. In some cases, the job of bishop is interpreted to be more like an influencer selling products than a servant of Church unity as Vatican II imagined.

It further translates into a crisis of mission, something that’s become clearer in the course of Francis’s pontificate. Synodality still gives bishops a primary role, but much different from and not nearly as decisive as the role they had in previous synodal phases (in the early Church, in the post-Trent period, in those local and national synods that were celebrated after Vatican II, and in the Bishops’ Synods celebrated in Rome from 1967 to Benedict XVI). The Bishops’ Synod, or Synod of Bishops, created by Paul VI in 1965 is changing its name simply to “Synod” (no “of Bishops”), as we can see from the constitution of reform of the Roman Curia Praedicate evangelium, published by Francis in March 2022; it is possible that laypeople and women (or, more women, after Sister Nathalie Becquart) will be appointed as voting members of the Synod. It is the expectation in the Roman Curia that in the next few years a certain number of positions will be given to laypeople and women instead of bishops and cardinals, thus reinterpreting one of the wishes of Vatican II about a new Vatican, one more responsive to the needs of the local bishops. A new council—Vatican III?—is very hard to imagine today, with something like 5,700 bishops (twice as many as at Vatican II) who according to canon law and tradition have a right to be voting members of a council. It’s even harder to imagine a legislative and doctrinal assembly of the Catholic Church consisting only of celibate male members being accepted as legitimate. There are also big questions concerning the role and constitution of national bishops’ conferences, one of the most important institutional changes of the last century and of Vatican II: How will synodality and bishops’ conferences co-exist?

The job of bishop is interpreted to be more like an influencer selling products than a servant of Church unity as Vatican II imagined.
sharetweet

“Synodality” doesn’t only mean the ongoing synodal process (which will now continue at least until October 2024, after Pope Francis added a second session of the Synod in Rome to follow that planned for October 2023). It also means a series of reforms, which have already taken place in some local churches, but are not even on the horizon in others (like Italy); these include shared governance in ecclesial and Church-run bodies and the substantial participation of laypeople and women in the formation of future priests. Other reforms can happen only with input from Rome, like a change in the way candidates for the episcopacy are evaluated, selected, appointed, promoted, or demoted.

All of this is integral to a synodal Church—and so it entails a massive rethinking of the place of the bishops in a Church that retains apostolic succession and the mark of apostolicity. The first step is acknowledging the conceptual gap between Vatican II and today, and how differently this gap has manifested itself in different parts of the world—and thus the differences in how to bridge it. The second step is to engage in discussion on the theology of ministry, which in the last decade under first Benedict XVI and then Francis has lessened in relevance. The symposium on the priesthood organized by the Dicastery for Bishops and Cardinal Marc Ouellet last February was based on a pre–Vatican II theology of ministry and sent ominous signs about the attempts to spin synodality in a way that does not address the crisis of ordained ministry.

The ongoing Synod on Synodality makes sense only if we are prepared for a generation-long reflection on ministry in Catholicism. It’s clear already that this is no longer the bishops’ Church, even outside the United States. But for the Catholic Church in this country, synodality is important in distinct ways. It’s meant to fill the vacuum left by the bishops, a vacuum into which other voices and entities—in media, in business, in politics—have rushed, and in so doing have put the catholicity of the Church at risk.