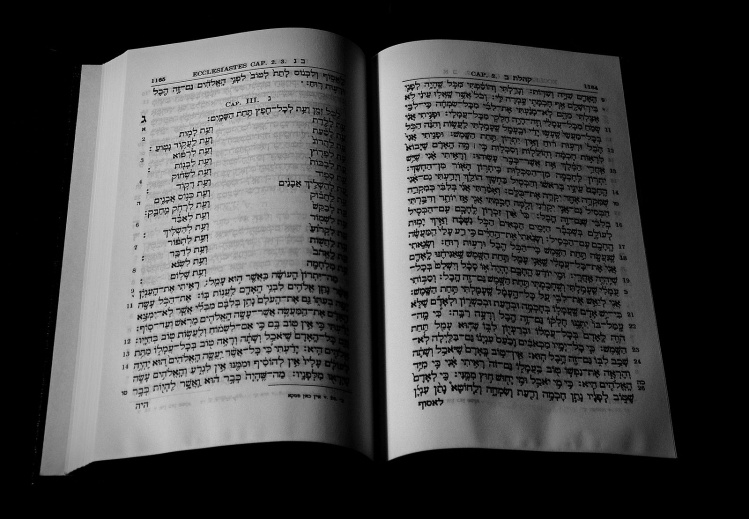 The Bible in Hebrew

As I made my way through the first chapter (“The Eclipse of Bible Translation”) of Robert Alter’s new book, I kept falling into excitedly twitching agreement—which was embarrassing, because I was on a plane at the time. Alter, famous for his own renderings of Classical Hebrew in English, laments that “attention to the literary aspects of the Bible, which are essential to understanding it, plays no role at all in [modern biblical scholars’] training,” and that “the translators consequently proceed as if the Bible had no style at all....”

That repeated “at all” suggests an endearing despair. Alter’s chief complaint should be sympathetic to everyone familiar with the original languages, as well as to any thoughtful and curious reader of translations. In Britain and America, the Bible has not been cogently translated so much as wantonly Englished. I can hear the very offenders agreeing in part but pleading that they did their best: English is a strange, almost incomparable language, and any kind of artistic bridging over to it is going to be unsatisfactory.

Though readily acknowledging this fact, Alter lays out a program for improvement. He gives clear, well-selected explanations of how the Hebrew Bible works, from phrase to phrase, as a performative means of communication. His subsequent chapter titles neatly set up the topics: “Syntax,” “Word Choice,” “Sound Play and Word Play,” “Rhythm,” and “The Language of Dialogue.” His policies are, on their face, unexceptionable. Linguistic phenomena should be replicated in the target language to the extent possible. The resonant expressiveness of modern English authors brought up to the sounds of traditional, poetic Bible translations is a good guide for further translation.

The Bible contains a great many instances, most of them key to the initial vividness of narratives and teachings, and hardly any of them honored by standard translations, except by explanations in footnotes.
sharetweet

But as I surveyed Alter’s actual demonstrations, his persuasiveness dimmed. I don’t think the fault is his. My imagination and my memory joined in making me wonder whether American civilization right now actually could foster anything in the spirit of the original Bible. We are utterly unlike defeated Judah under the weird, saving sponsorship of the Persians, and even more unlike the early Christians in the shadow—whether sheltering or threatening—of the Roman monolith. We are an absurdly successful, materialistic, late-imperial society, with bright, pixelated luxuries of individual autonomy and self-esteem. How could we think the way the Bible does, or aim where it aims? In particular, what would motivate us to throw ourselves into the arms of an immense Otherness, an act at the heart of both monotheism and supreme artistic creation?

During the first years of post-apartheid South Africa, a time of supreme risk and resounding change, when practical possibilities fell through but spiritual challenges remained, I witnessed breathtaking synthetic art forms, especially dance and music. Performers with a blend of classical, indigenous, and modernist training stunned us with the truth of their message: we were all in peril together and would be saved by love or nothing. Such unity, demonstrating to both artist and audience that they can be—must be—more than their separate selves, or clans, or even nations, is the essence of the Bible. Where do we get that sensibility in the United States now, except by a disaster we must pray to avoid?

Absent that sensibility, our literary culture is mechanical, proprietary, and self-congratulatory—not an all-or-nothing dance before the Lord, but more like a form to fill out or a cliché drama to download, binge, and imitate. Such a learned and accomplished translator as Alter is not immune from formula. He almost always places the correct values in an equation, but it sometimes seems he has not looked critically at his results. Though Alter’s overriding confidence in his professional expertise and judgment are nothing unusual nowadays, the Bible demands more.

He goes so far as to dismiss a well-established means of linking worlds, namely the “dynamic equivalence” by which missionary translators adapt their purposes to the alien cultures in which they labor. A famous instance: a certain African audience would understand the palm branches placed on the road as an insult to Jesus, not as a tribute to him. The translated text therefore needs to state that branches were removed from the road. The cultural gap may seldom be so dramatic, but in the domain of humor it is constant, and one cost among many of skimming over it instead of accommodating it is flat characterization: speakers who are warm and funny in the original text are dull and pompous in translations. More sweepingly, to read such a text, no matter how much fun it was to the original audience, is a chore.

The problem comes to a head when Alter has wordplay to deal with. The Bible contains a great many instances, most of them key to the initial vividness of narratives and teachings, and hardly any of them honored by standard translations, except by explanations in footnotes. But to reproduce the wordplay requires strain and ingenuity, and often a departure from the inherent qualities of the Hebrew. Because Alter maintains as a sort of checklist certain rhythms and word orders, a pristine simplicity and physicality of expression, and other characteristic modes of Hebrew, he is remarkably quick—for a literary translator—to dismiss the jokes as “untranslatable.”

Going through his long series of word-play problems, again and again I found myself disputing his verdict of untranslatability. For example, Alter writes:

Here are two lines of double word play from Zephaniah (2:4) that altogether resist transference to English. The literal sense of the line is “For Gaza shall be abandoned / and Ashkelon a desolation. // Ashdod at noon shall be banished / and Ekron be uprooted.” The dire fate of these Philistine cities is clear enough in the English, but what is not visible is how this prophecy is reinforced by a kind of fusion of words. The Hebrew for “Gaza shall be abandoned is ‘azah ‘azuvah and for “Ekron be uprooted” is ‘eqron te‘aqer…. It is hard to imagine how this could possibly be conveyed in English.

In fact, these lines are even more intricate than Alter shows (not that he can be blamed for failing to show everything—that job would be endless): there is plenty of alliteration and other sound play binding the second and third geographical elements into the grand poetic scheme, so that the translation problem is even harder than he suggests. But why leave the problem abandoned like these cities? What about this little experiment?

For Gaza shall be abandoned land,
And Ashkelon a town thrown down;
Ashdod at noonday a displaced place,
And Ekron torn entirely from the ground.

Alter would no doubt object that this is too unlike Hebrew literary language, whose power subsists in a few spare syllables, and whose very nature eschews wordy elaboration. He may be right, but even if he is, this wouldn’t strike me as a reason to give up on the search for a properly synthetic, beautiful, persuasive new version of the lines. What I’m less sure about is whether it’s still in our culture to make the passionate longing for a God of everyone intelligible. That is where the Bible as a great book, and subsequent great versions of the Bible, came from.