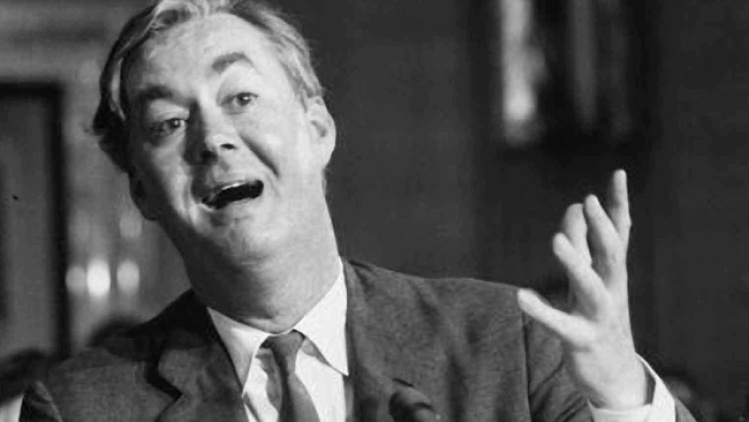 The problem with most discussions of political polarization is that they reach quickly for technical causes and solutions. Our politics are polarized, we are told, because of gerrymandered districts, the rise of opinionated media sources, and party primaries closed off to independents or voters in the other party.

There’s nothing wrong with thinking about such things, but all the mechanical fixes in the world will not overcome a brute fact about the United States in 2015: We really do have profound disagreements with each other that are intellectual, moral, partisan, and ideological.

Because the facts are clear on this, it’s always important to note that our polarization is asymmetric: Republicans are much more conservative as a group (close to two-thirds of them) than Democrats are liberal (about one-third). Still, if our divisions are intellectually rooted, who has ideas that might bring us together?

One name comes to mind when you try to think of someone who managed to live on both sides of the ideological divide and still kept his own thinking coherent. The late Daniel Patrick Moynihan worked for both John Kennedy and Richard Nixon. He opposed the Vietnam War but was not wild about anti-war protesters. He was often called a neoconservative but thought of himself as a liberal. He was a Democratic senator from New York for twenty-four years and managed to get votes from just about everybody. In his last re-election race in 1994 -- a bad year for Democrats -- he won by fourteen points.

How did he do this? The question is interesting enough that two volumes were published this year to try to explain the matter. In his gem of a book, The Professor and the President, Stephen Hess, who worked for Moynihan (and is my Brookings Institution colleague), tells the story of the unlikely Nixon-Moynihan political courtship. And Moynihan was an interesting enough thinker that Greg Weiner, a political philosopher himself, treats him as one in American Burke: The Uncommon Liberalism of Daniel Patrick Moynihan.

Weiner’s notion is that Moynihan was undoubtedly a liberal “through and through” because he “believed in government as an agent of social improvement” and thought it capable of doing large and important things. But he shared with Edmund Burke, often seen as the founder of modern conservatism, a skepticism about grand schemes for “wholesale social transformation” and a belief in limits. “Both were conserving reformers who valued traditional systems of authority, most primarily the family,” Weiner writes, and both “interpreted politics in terms of the observable and the concrete rather than the metaphysical and the abstract.”

Weiner argues, and I am inclined to agree, that one reason we miss Moynihan, who died in 2003, is because we have a need for more Burkean liberals and more Burkean conservatives. They would share in common a concern for evidence, an understanding of the limits of human reason, a skepticism about our ability to transform “complex social systems,” and a belief that we can always make things better but will never make them perfect. From these shared assumptions, they could then argue about such matters as how much social generosity to expect from government.

Moynihan’s Burkean nature no doubt made it easier for the lifelong Democrat to work for a Republican president. Hess shows how he was also a brilliant inside player who knew how to get around bureaucratic and human obstacles -- and how he appealed to Nixon. Moynihan made him laugh, which wasn’t a common thing in that White House, and also acted as a tutor, which flattered Nixon by taking his intellectual curiosity seriously, whose insecurities ultimately undid him.

Hess details the still astonishing story of how Moynihan got Nixon to propose a truly radical innovation, a guaranteed annual income for all Americans. The Family Assistance Plan was killed in Congress because it was too liberal for Republicans and not generous enough for Democrats. But it was, in its way, a classic Burkean program. Instead of creating intricate and expensive new services for the poor, Moynihan proposed to give them what they definitely needed more of, which was money.

As a skeptic about technical solutions to polarization, I certainly won’t propose that all Americans study their Burke and their Moynihan. But as an antidote to the tendency these days toward the-sky-is-falling rhetoric, we could usefully remember this very Burkean warning from Moynihan: “When situations of considerable but not impossible difficulty are described in apocalyptic terms, responses tend to be erratic, even convulsive.” As Moynihan would never say: Chill.