The Politics of Celibacy and Marriage, 1720–1815
By Luke Timothy Johnson 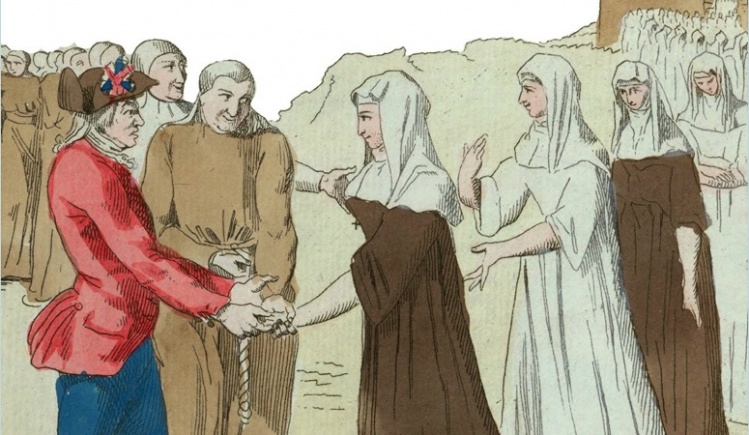 In eighteenth- and early nineteenth-century France, priestly celibacy was not only loudly and publicly disputed, it became a matter of the state’s social policy—indeed, social engineering—during and after the Revolution (1789–1799). Basing her research on published literature and on state archives, E. Claire Cage traces the stages by which the celibacy of the clergy went from being contested by the philosophes, to being proscribed by the state in the period of the terror (1793–1794), to being restored by the Concordat of 1801. Her story is enlivened by generous citations from the participants in this great social upheaval, giving voice above all to the priests who found themselves at one point seeking permission to marry, and at another point seeking forgiveness for having married, even if under duress. The number of those affected by controversy and policy was not insignificant: in a pre-revolutionary French population of some 28 million, about 190,000 were bound by celibacy because they were secular clergy (90,000) or members of religious orders (80,000, including some 55,000 nuns).

The title “Unnatural Frenchmen” nicely captures the two main arguments made against a celibate clergy. Celibacy was first of all “unnatural,” because it prevented men—and they are the ones exclusively in view—from fulfilling the role that Nature intended for them: to marry, to beget children, and to be the heads of households. Since every man had the right to fulfill the role assigned by Nature, celibacy was literally a sin against Nature. The damage done by such an unnatural life was illustrated by reports (and cartoon portrayals) of clergy seducing young women in the confessional, and betraying parishioners through acts of adultery. But there was also a political dimension to the debate from the first. The best science of the age declared that depopulation, not overpopulation, threatened the nation; celibacy was therefore unpatriotic, especially in a time when France was threatened by enemies and needed all the soldiers she could raise. Moreover, celibate clergy owed their first allegiance to a foreign power and could not be relied on as honest citizens of the patrie. Far better that priests should be enmeshed in good French citizenship through the bonds of a wife, children, and the care of a household.  Such criticisms turned to social policy during the Revolution, when the right of a priest to marry became an obligation to marry. The full force of propaganda and law was turned to the project of getting priests married, as part of the liberation of France from its Catholic past. An engraving captures the moment: a long line of priests and a long line of nuns approach a simple member of the Third Estate, who joins their hands in marriage. The suppression of religious orders hastened the process. Some priests and nuns married out of conviction or love, others under severe legal and social pressure. But Cage’s account makes clear that the experiment in social engineering left much messiness behind, in the lives of priests and nuns themselves, in the families they formed, and among the congregations in which many of them continued to minister.

Although Cage does not introduce contemporary debates over celibacy until her very last paragraphs—noting how the charge of “unnatural” has changed from the eighteenth-century context—readers cannot help but regard the older conflicts in light of more recent discussions. And although Cage does not herself draw the lesson, her readers are led to reflect on the vagaries in what in different eras might constitute a consensus of “scientific knowledge,” and on the frightening ways in which pseudo-science can be used to support totalizing experiments in social programming.

How Is the Bible True?