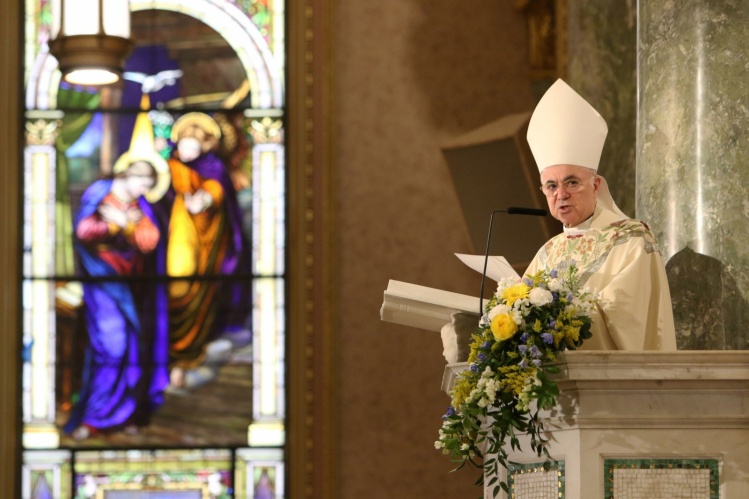 Very much tongue-in-cheek, the editors of the well-respected Italian-language church-news site, Il Sismografo, dubbed former Nuncio Archbishop Carlo Maria Viganò the “Savonarola di Varese.” Although parallels with the fifteenth century Dominican are not exact, Viganò has indeed appeared as a self-styled prophet, and expended a good deal of energy denouncing the pope.

His most spectacular denunciation so far has been directed at Pope Francis for “grave, disconcerting, and sinful conduct” in (supposedly) covering up for the crimes of Cardinal Theodore McCarrick and even seeking advice from him—“someone he knew to be a pervert.” Viganò’s first “testimony” also accused numerous other church leaders of willfully joining in a conspiracy to promote and protect “homosexual networks” among the clergy, a gay conspiracy whose “octopus tentacles” are “strangling the entire church.”

The preaching of this modern-day Savonarola has channeled the justified fury over sexual abuse into a rage against Pope Francis and gay priests—at least among some Catholics in America. Shockingly, even certain American bishops, who ought to know better, immediately announced that they found Viganò’s charges credible.

International reaction among church leaders has run in the opposite direction. The bishops of Europe immediately published a statement of support for Pope Francis. So did the bishops of Latin America. Cardinal Oswald Gracias of Mumbai went on record saying that all the church in Asia supports Pope Francis. Specific groups, such as the Catalan bishops, also issued statements on his behalf. In Portugal, thirty public figures staged an event in which they read aloud from Francis’s writings and performed music as a witness of solidarity with him.

Francis has steadfastly refused to comment on the Viganò allegations. Some discern a spiritual motivation behind this, believing that Francis is following the model of Jesus. This may be so. Yet I think it has also been a strategically savvy move. For the pope to respond to such hostile personal allegations would lend them additional weight, and lower the prestige of his office. Besides, how do you prove to Viganò that, in reality, there are no “tentacles”? Or demonstrate that you didn’t know something that he thinks you knew? If Francis answered, there would be arguments in rebuttal, additional points for which another response would be demanded. How do you talk someone out of a conspiracy theory?

What will happen to Viganò? He cannot keep up this game indefinitely.
sharetweet

After publishing his testimony, Viganò went into hiding, but it quickly became clear that he did not intend to remain quiet. He felt it necessary to respond to his critics, and he railed against Francis’s non-response to his first testimony. Thus, a second testimony was born, in which he repeated his claims, attacked the pope’s character yet again, and called for Cardinal Marc Ouellet, Prefect of the Congregation of Bishops, to release the documents that would prove his case.

I must admit that I was pleased when Ouellet issued an open letter in September contradicting Viganò’s claims. Finally, someone in authority stood up to correct him. Ouellet called the testimony “unjust and unjustifiable.” He challenged Viganò’s facts—demolishing the claim that McCarrick had been under sanctions that Francis had then lifted. He pointed out that judgments in making episcopal appointments are not infallible, but to see corruption behind them all is deeply unfair. He even chided Viganò for his lack of faith in the theological principles undergirding the Catholic understanding of the papacy. Using words such as “incomprehensible” and “deeply deplorable” to describe Viganò’s actions, he urged him to reconcile with the pope for his own sake as well as for the good of the church.

Nothing doing. Viganò has now issued his third testimony—this one in response to Ouellet’s letter. In it, he doubles down on his original charges. He invokes the Final Judgment and calls for others to join him in unmasking corruption. Although he now admits that canonical sanctions were not applied to McCarrick (a cornerstone of his original argument), he dismisses the distinction between canonical and informal restrictions as irrelevant “legalese.” It has become clearer than ever that what he’s really exercised about is homosexuality in the priesthood, calling it a “plague” and a “scourge.”

Savonarola came to a bad end. He not only alienated the pope, his supporters ultimately turned on him and condemned him. What will happen to Viganò? He cannot keep up this game indefinitely. Will more American bishops join him on the barricades? I suppose that anything is possible. We might even see a bonfire of the vanities, with Building a Bridge and a few copies of Always Our Children thrown on the pyre. But I don’t think so. The winds are changing. Francis has launched his own investigation of the McCarrick case and scheduled a global meeting on sexual abuse. The pope is steering the church on a better course than the one Viganò recommends. Most people will see this, eventually.