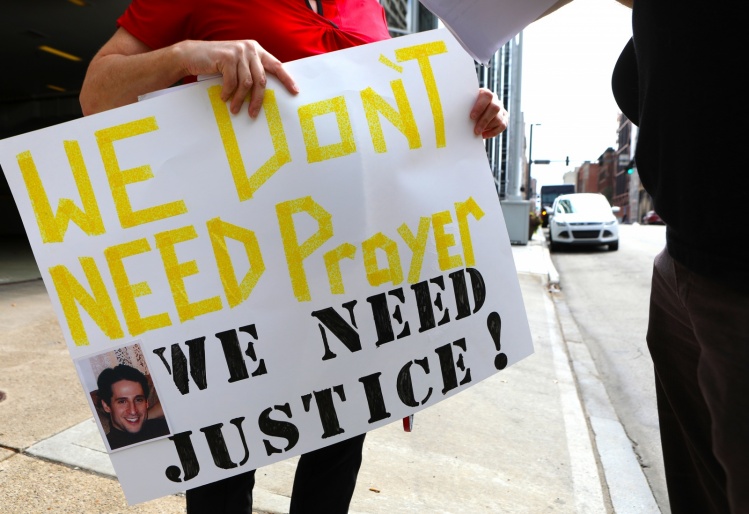 As the Justice Department launches an investigation of clergy sexual abuse of minors in Pennsylvania’s Catholic dioceses, it is worth noting that victims have called for such a probe for at least fifteen years. Leaders of SNAP, the Survivors Network of those Abused by Priests, told Attorney General John Ashcroft in a November 2003 letter that the Justice Department was in a “unique position” to plumb the secrets within the church’s organizational structure.

“We believe that senior management within the Church…have not been held institutionally accountable for these practices, and as a non-profit corporation continue to selectively circumvent our Nation’s laws,” their letter said.

SNAP and the Center for Constitutional Rights renewed the long-ignored call for a federal probe in a letter to Deputy Attorney General Rod Rosenstein dated August 15, one day after the release of the state grand-jury report alleging a long-term coverup of credible abuse allegations in Pennsylvania. The letter calls for criminal or civil charges, “where appropriate,” against the Catholic hierarchy.

The passage of fifteen years makes such an investigation much more difficult for federal prosecutors because the statute of limitations on federal crimes is generally five years. But the letter hints at how federal authorities might overcome limitations that stymied local prosecutors in many states. It points to evidence that the coverup of abuse has continued even after the reforms the U.S. Catholic bishops put in place in 2002, including a Philadelphia grand-jury report from 2011 that asserted thirty-seven credibly accused priests remained in ministry. It charged that “procedures implemented by the Archdiocese to help victims are in fact designed to help the abusers, and the Archdiocese itself.” Still, that’s seven years ago—it would have been much easier for the U.S. attorney’s office in Philadelphia, which is leading the new probe, to investigate back then.

In their letter, lawyers from the Center for Constitutional Rights suggested investigating for violations of international human rights treaties the United States has accepted, “for which there is no statute of limitations.” Another route around statutes of limitations, politically bold but legally possible, was the letter’s suggestion to investigate for a violation of the Racketeer Influenced and Corrupt Organizations Act, or RICO. This 1970 law was created by Congress to prosecute elusive organized crime bosses who often beat cases in state courts. It has been applied in many other kinds of cases since then.

The RICO statute allows prosecutors to charge a “pattern” of criminal activity stretching back decades. Two “predicate acts”—offenses drawn from a list of thirty-five federal and state crimes—are the starting point for proving a criminal “pattern,” but just one “act” must be within the past five years. For a conviction on a charge of conspiracy to violate the RICO law, it’s not necessary to establish that even one “predicate act” occurred within the past five years. The five-year statute of limitations begins to run “only when the purposes of the conspiracy have either been accomplished or abandoned.”

That’s the language the federal-appeals court in New York used when upholding the conviction of one of the mob bosses accused in the 1986 trial of the Mafia’s ruling “commission,” a case that illustrated how powerful the RICO law can be in going after bosses whose underlings do the dirty work. The RICO law allowed prosecutors to tell the jury about a pattern of criminal activity dating back to 1931.

It’s one thing to label crooked politicians or Wall Street wheeler-dealers as racketeers, but it is shocking to think that the criminal RICO law could be used against “white collar” Catholic hierarchs.
sharetweet

To be clear, I am not advocating the use of the RICO statute on Catholic bishops—I have a lot of reservations about how the RICO law has been used. As a reporter in New York’s federal court for much of the 1980s, I covered many media-celebrated racketeering cases. The defendants in some cases were evil—serial killers, really—but even so, I suspected that the aggressive prosecutorial tactics that RICO unleashed on mobsters, drug kingpins, and terrorists would eventually be applied to everyone else.

RICO allowed prosecutors to get around traditional legal safeguards such as double jeopardy and statutes of limitations. The “mega-trials” that resulted were so big and complex that they undermined the right to a fair trial, as some judges determined. For example, I recall the Illinois pizza man convicted in the “Pizza Connection” case, one of twenty-one defendants, after a year-long trial that included about twenty minutes of evidence relevant to him. He was not convicted so much as swept away; the appeals court later ruled (after his incarceration) that there had been no evidence to convict him.

The U.S. attorney in Manhattan, Rudolph Giuliani, was celebrated for his expansive use of the RICO law and rode the cases into a political career. He encountered pushback from the Wall Street Journal editorial board when he employed the same tactics on white-collar criminals, but overall, his attack on Wall Street was politically popular as well.

It’s one thing to label crooked politicians or Wall Street wheeler-dealers as racketeers, but it is shocking to think that the criminal RICO law could be used against “white collar” Catholic hierarchs. And yet the initiation of a federal criminal probe, accompanied by the public disgust that the detailed Pennsylvania grand jury report has prompted, raises the possibility. The U.S. Catholic bishops left it to the legal system to decide their accountability, and this is where that decision has led.

According to the Associated Press, the U.S. attorney in Philadelphia, William McSwain, wants to put some church leaders before a federal grand jury. The AP said the grand jury subpoenaed records for cases in which anyone “took children across state lines for illicit purposes; sent sexual images or messages via phone or computer; instructed anyone not to contact police; reassigned suspected predators; or used money or other assets as part of the scandal.” The grand jury also subpoenaed diocesan financial and organizational records, including for clergy assignments.

It’s not the first time the Justice Department has looked into the coverup of clergy sexual abuse in the Catholic Church. In 2009, the U.S. attorney in Los Angeles launched a probe of the archdiocese there, looking to see if there were violations of the federal “honest services” fraud law. This appeared to aim at the top officials of the Archdiocese of Los Angeles, especially Cardinal Roger Mahony. But even at the time, this was criticized as an overreach. The probe ended without charges; the Supreme Court has since limited that statute’s use.

One doesn’t need to be a fan of the Showtime series Billions, in which the actor Paul Giamatti plays politically ambitious U.S. attorney Chuck Rhoades, to know that federal prosecutors are sensitive to the public mood when deciding which investigations to pursue. Fifteen years after SNAP’s initial request was ignored, the landscape has changed considerably. Some of those calling most insistently for accountability had in the past defended the hierarchy against charges of a coverup. Take, for example, “12 Things Every Catholic Should Know About the U.S. Scandals,” a National Catholic Register editorial published in 2010 after a new round of questions over Pope Benedict XVI’s handling of abuse allegations. The article defended church authorities, saying they had acted “for what seemed good reasons at the time: protection of the victims and their families, opportunity for rehabilitation of the offender, the avoidance of scandal to others. It is unfair to judge events 30 years ago by today’s standards.”

There are few such defenders now; the same paper calls out, “We Need to Know: Silence Is Not an Option in the Abuse Crisis.” We are in a new sort of Catholic moment, and federal prosecutors are responding to it.

Mass in the Orange Zone