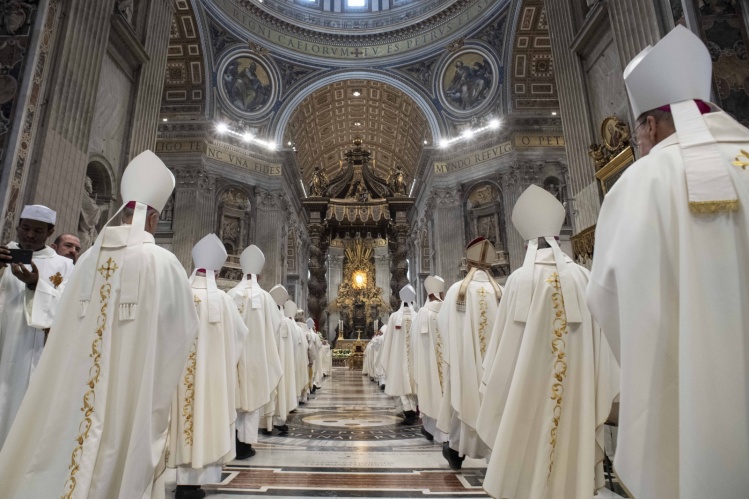 Prelates attend a Mass celebrated by Pope Francis to mark the 60th anniversary of the opening of Vatican II (CNS photo/Vatican Media).

“We have not faced the prospect of Armageddon since Kennedy and the Cuban Missile Crisis,” President Joe Biden said during a Democratic fundraiser on October 6, referring to Vladimir Putin’s threats in the face of Russia’s faltering campaign in Ukraine. This is what many American Catholics remember today, in October 2022: those several days in October 1962, the most dangerous moment in the history of the Cold War, and one that influenced the participants at the Second Vatican Council, which changed so many things in the Church.

President Biden is not the only Catholic figure in the United States to warn about the risk of a nuclear war. Church leaders have also raised their voices. In January, even before the invasion of Ukraine, Archbishop John C. Wester of Santa Fe, New Mexico, released a pastoral letter titled “Living in the Light of Christ’s Peace: A Conversation Toward Nuclear Disarmament.” On September 23, Bishop David J. Malloy of Rockford, Illinois, chairman of the USCCB Committee on International Justice and Peace, condemned threats made during the 77th session of the United Nations General Assembly to use nuclear weapons in the Russia-Ukraine war. More recently, there was Seattle Archbishop Paul Etienne, who said in his October 7 message to his diocese: “In this Archdiocese, the Bangor Trident Nuclear Submarine Base has the largest number of deployed U.S. nuclear weapons. Because Puget Sound could be on the frontline in a nuclear war, I feel an urgent obligation that we review our Catholic teaching on nuclear weapons and the need to sharply reduce these weapons of mass destruction until we can eliminate them.”

Talk of nuclear war has been normalized, and the Catholic Church, including Pope Francis, has been one of the few institutional voices warning against the risks of nuclear escalation. As he noted at the Angelus of October 9: “At the beginning of Vatican II sixty years ago, the danger of nuclear war menaced the world right at that time. Why don’t we learn from history? Even at that moment, there were conflicts and huge tensions, but the way of peace was chosen.”

Talk of nuclear war has been normalized, and the Catholic Church, including Pope Francis, has been one of the few institutional voices warning against the risks of nuclear escalation.
sharetweet

Here in the overlap of the sixtieth anniversary of the opening of Vatican II and of the Cuban missile crisis, the latter has largely overshadowed the former. This has to do with how the Russian invasion of Ukraine is different from all other wars since the end of World War II. The war in Ukraine is affecting the Catholic Church and the Vatican: it has forced the Holy See to recalculate its diplomatic relations and rebalance prophecy and diplomacy; it has halted the ecumenical dialogue with the Russian Orthodox Church; it has given new urgency to the push against nuclear proliferation, but at the same time has slowed recent attempts to radically redirect teaching on war and peace toward pacifism; it has exposed the gaps in the teaching of Vatican II and the post–Vatican II magisterium on the intersection between the condemnation of “every operation of war which aims indiscriminately at the destruction of whole cities, or of widespread areas with their inhabitants” (Gaudium et spes, par. 80) and the undeniable right to legitimate defense that governments have “once all means of peaceful negotiation have been exhausted” (Gaudium et spes, par. 79). The war in Ukraine is a turning point; it will influence the development of the post–Vatican II magisterium on peace and war after the Catechism of the Catholic Church (1992), the Compendium of the Social Doctrine of the Church (1994), and key pronouncements during the wars in the former Yugoslavia and Somalia in the 1990s, in Afghanistan, and in Iraq after 2001.

Given the intimate familiarity of the Church in this country with war, much more than Western Europe since 1945, the Russian invasion has not surprised U.S. Catholics to the extent it surprised the Vatican and Pope Francis. The robust theological work done in the United States on peace and war by the bishops’ conference (especially the 1983 pastoral letter The Challenge of Peace), and by professional theologians such as Lisa Cahill, David Hollenbach, and Tobias Winright, has also played a role, with few parallels in Europe in the last fifty years.

Russia’s war in Ukraine has also exposed the predicament of the U.S. Catholic Church. While its leading voices on the risk of nuclear war are not hard to find, they can be hard to hear. In many ways that’s because of the differences between the state of the Church in October 2022 vs. October 1962. The first reason has to do with how we see the war in Ukraine as a sign of our time. John Paul II is a hero of conservative and neo-traditionalist American Catholicism (two recent examples: George Weigel with his latest book, and Bishop Robert Barron of Word on Fire). But John Paul II was also a fierce critic of American wars in Iraq, both in 1991 and in 2003, and a careful thinker about the teaching of the Church on peace. This is a key aspect of his pontificate, but it is rarely, if ever, noted in appeals to him as a response against Catholic liberal theology. It’s an example of a highly selective ultramontanism in the post–Vatican II period, but also of a highly selective collective memory regarding the active role of American Catholics in the American wars after 9/11. This leads to the very complicated place Catholicism occupies in the American consciousness today, for those trying to find a space between the embrace of militarism and, in light of the last two decades of involvement in the Middle East especially, an isolationist rejection of all wars that fails to see that the war in Ukraine is an epoch-changing event. The U.S. bishops at Vatican II voted against the condemnation of nuclear war in Gaudium et spes, but in 1965 U.S. Catholicism was not as visibly involved in American militarism as it has since become. For many ordinary Catholics, a sense of guilt-by-association keeps them from speaking out more forcefully against this trend.

In this time of war, when the risk of nuclear conflict is real, it has become difficult to imagine the possibility of coming together as a visibly united community.
sharetweet

The second reason has to do with the destructive effect of analyzing Vatican II in terms of the binary of “continuity” and “discontinuity.” This is an impoverished yet widely disseminated construct that does not reflect Benedict XVI’s programmatic speech to the Roman Curia on December 22, 2005. It’s true that there are gaps in the post–Vatican II Catholic tradition concerning peace and war, given changes in warfare in the decades since, and the crisis of the post–Cold War international order. But the Church’s teaching on peace and war, and in particular on nuclear weapons, is inseparable from Vatican II’s shift on the morality of war and the impossibility of imagining a nuclear conflict that fits the pre–Vatican II doctrine of “just war.” That is one of the discontinuities with tradition that, together with continuity, made Vatican II. Consider Pius XII’s September 1954 address to the World Medical Association, in which he made explicit reference to atomic, bacteriological, and chemical weapons and declared them admissible for “rigorous defense needs” unless they risked escaping human control and leading to “annihilation of human life.” The development of doctrine between then and Vatican II is obvious, as is the development between Vatican II and the war in Ukraine. But when Catholic leaders and bishops-turned-influencers impose the idea that discontinuities cannot exist in the Catholic tradition—because accepting discontinuities is equated with liberal-progressive theology that is not Catholic—then we are not facing the truth. We lose the ability to discern the signs of the times and thus lose credibility as well. In October 1962 and during Vatican II, only integralists and future schismatics doubted the authority of the council to develop doctrine from what it was previously. The U.S. bishops were actually the most vocal supporters of one of the clearest examples of doctrinal development at Vatican II: the declaration on religious liberty Dignitatis humanae.

Then there is a third reason, which is of spiritual and ecclesial order, and it has to do with the political polarization that has flooded the U.S. Church (with the aid of a good number of U.S. Church leaders) and the Church outside the United States. In his homily during the October 11 Mass in St. Peter’s Basilica, marking the sixtieth anniversary of the Second Vatican Council, Pope Francis pleaded for the Church to “overcome all polarization and preserve our communion.... The Church is a communion in the image of the Trinity. The devil, on the other hand, wants to sow the darnel of division.” In this time of war, when the risk of nuclear conflict is real, it has become difficult to imagine the possibility of coming together as a visibly united community or even finding a common point of reference. We cannot find a place to pray together, freed of our polarized identities, or to conduct a Christian conversation, or to offer clear moral witness. It’s not just in our parishes and dioceses, but also in the other spaces and places (Congress, schools, and universities) where the ecclesia is called to be one. This may be the biggest difference between October 1962 and October 2022.

The Progressive ‘Catholic Spring’ & Its Predecessor