...and Russia is not Athens
By Sven G. Holtsmark
Continuing the Conversation
Russia
Ukraine
War and Peace
Politics 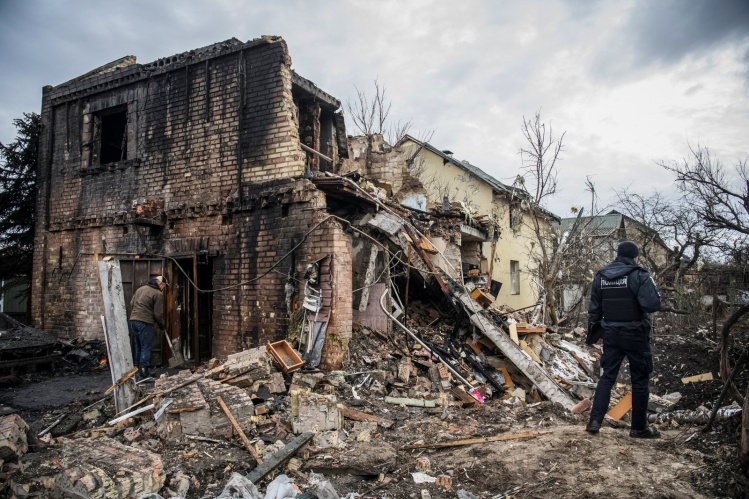 “Ukraine is confronted with a stark choice: fight on through a bitter winter with death raining from above, or initiate negotiations with Russia under unfavourable terms. Two-and-a-half millennia ago, the leaders of the Greek island of Melos confronted a similar choice.”

The quote is from the opening paragraph of a December Commonweal article, “Right on Its Side, but Not Might?” written by Gregory M. Reichberg, Stein Tønnesson, and Henrik Syse. They are right that in this imperfect world, to compromise with the evildoer can be the pragmatically and morally right thing to do. But for that to be the case, an acceptable compromise must be in the realm of the possible. There may be a lesson to learn from this piece of ancient history, but if so, it will not be the one suggested by the authors.

Thucydides, in his History of the Peloponnesian War, recreated as verbatim dialogue the encounter between the invading Athenian generals and the leaders of the still-independent island state of Melos. In the dialogue, the Athenians made it clear to the Melians that they had to accept becoming vassals of the Athenian empire or face certain defeat and death—resistance being futile since the imbalance of power was unequivocally in the Athenians’ favor. As they famously put it: “The strong do what they can, and the weak suffer what they must.”

The Melians refused, partly in the belief that Sparta would come to their rescue, partly because they deemed it dishonorable to give up their freedom without a fight. The Athenians fulfilled their warning when the besieged Melians finally surrendered: having suffered desperate famine, the surviving adult males were slaughtered and the children and women were sold into slavery.

The story of Melos is open to numerous interpretations—one of them being the futility of resistance against an enemy of overwhelming power and ruthlessness, another being as a tale of the utter moral disaster that follows when might is allowed to become right. Reichberg, Tønnesson, and Syse use the story of Melos’s refusal to give in to the Athenian ultimatum to illustrate something rather different—that Ukraine must be open to negotiations with Russia: “not as an alternative to continued fighting in the cause of freedom, but as a necessary complement to it.” Being unwilling to negotiate, they imply, could lead to a “Melian tragedy.”

The authors claim to be “reluctant” to make “concrete recommendations” to the Ukrainians. This is nevertheless exactly what they then do, first by suggesting that negotiations with Russia now are in Ukraine’s interest, and then by outlining the framework for such negotiations. Pointing out that, as a rule, “compromise can be a wise course of action,” they suggest that “Crimea would most likely be on the table.” The first part of this is close to a truism—the way out of situations of conflicting interests often is some sort of compromise agreement. Regarding the second part, they may be right that Crimea will turn out to be the one concession that Ukraine—in the end—may be willing to offer.

Negotiations on such terms, the authors imply with reference to Henry Kissinger (personally I prefer to avoid Kissinger’s name in discussions about right and wrong), could be the way toward peace for Ukraine “within its prewar borders (the status quo ante).” They go on to state that “Russian withdrawal from eastern Ukraine to internationally recognized borders would be a reasonable baseline demand.” However, what is the basis for their implicit contention that Putin’s Russia will accept negotiations on such terms? Is there any evidence at all that this “baseline demand” is something that the Putin regime will ever accept as even a hypothetical option, if not forced to by military defeat, the prospect of military defeat or, more far-fetched, by internal revolt?

Are there any reasons to believe that Putin’s regime is both willing and mentally prepared to enter such negotiations according to international law?
sharetweet

On what basis do the authors believe that Putin will contemplate parting with the “new territories” of Donetsk, Luhansk, Kherson, and Zaporizhzhya, now formally part of the Russian Federation, including areas of Luhansk and Donetsk that they have controlled since 2014? No “suitable mediator,” whether from India or any other country, can change the undeniable fact that these ideas are utterly detached from any semblance of reality.

Once negotiations on these (impossible) terms are commenced, “we should hope for fair negotiations conducted in a manner consistent with widely agreed tenets of international law and morality.” This, they argue, “is certainly preferable to the amoral pressure that the Athenians so brutally put on the Melians, and to which the Melians reacted so valiantly, and yet so self-destructively.”

Yes, negotiations under such terms would no doubt be preferable not only to the choice of the Melians, but to war in general. That this is so should be obvious, bearing in mind that the most basic and “widely agreed” tenet of international law is that war of aggression is illegal, and so is the annexation of territories of another state. But again—are there any reasons to believe that Putin’s regime is both willing and mentally prepared to enter such negotiations according to international law? Negotiations that by their very nature would imply the recognition of the illegality (and utter failure) of Russia’s war of aggression against Ukraine?

Reichberg, Tønnesson and Syse, and in this they are not alone, seem to forget that there is no such thing as a unilateral compromise, and any “baseline demands” must, if the term shall have any meaning, be at least hypothetically acceptable to both parties. Moreover, the authors write as if it were within President Zelensky’s power to frame negotiations with Russia within “the widely agreed tenets of international law and morality.” If Russia adhered to such norms, there would have been no war in Ukraine in the first place.

For all these reasons, negotiations in good faith as suggested by the three authors is not an option as things stand—for the simple reason that they would presuppose regime change (for the better) in Moscow. On the other hand, we already know that another of their suggestions—“a temporary ceasefire,” with or without “a deadline for reaching agreement”—would be welcome in Moscow, but for the wrong reason: It would be used to replenish, resupply, and retrain a Russian army that is under heavy pressure from its opponent. For several reasons, the circumstances for the Ukrainians would be different—just one of them being that Ukraine does not have Russia’s underutilized industrial and demographic potential. The result could be renewed fighting that is even more ruthless than before, and with the Ukrainians in a worse position to hold their own than before the ceasefire. Contrary to what seems to be the authors’ presumption, ceasefires within a continued war do not necessarily reduce the total toll of suffering and victims. Reality is not always as we would like it to be.

Negotiations in good faith as suggested by the three authors is not an option as things stand—for the simple reason that they would presuppose regime change (for the better) in Moscow.
sharetweet

Thus, the possible lessons of Melos’s tragedy for the Ukrainians are not as suggested by Reichberg, Tønnesson, and Syse. Nor do the Ukrainians, or the rest of us, need a reminder of the truism that “compromise can [my emphasis] be a wise course of action.” A more relevant lesson from Thucydides’s story, for those who still believe otherwise, is that wars do not always result from conflicts of legitimate interest: armed conflict between states may be the intended outcome of an expansionist ideology, aggression pure and simple, for political purposes or with the aim of territorial conquest. Or both, as with Russia’s war against Ukraine.

This was the case when the Athenians invaded Melos, and this is the reality of Russia’s war against Ukraine. Reichberg, Tønnesson, and Syse seem to view Russia’s war against Ukraine as just another solvable “conflict” where both sides have legitimate grievances against the other, and Putin’s regime as a normal government that operates within the confines of “widely accepted” rules and norms. Both presumptions are plain wrong, which should be clear to everyone by now. Wishful thinking may work as an emotional placebo for bystanders to the tragedy but should not be given place in discussions about the way forward for Ukraine or Russia.

A final note: The authors imply that the Melians refused an offer to “negotiate” with the Athenians. They have missed a core point of Thucydides’s story. The meeting between the Athenian generals and the Melians had nothing to do with proper negotiations (the Athenians’ use of the word “negotiations” makes no difference); it was simply an occasion for the aggressors to present their ultimatum to the victims and to teach them their version of morality—that might is right.

Sven G. Holtsmark is a professor of history at the Norwegian Institute for Defence Studies/Norwegian Defence University College.