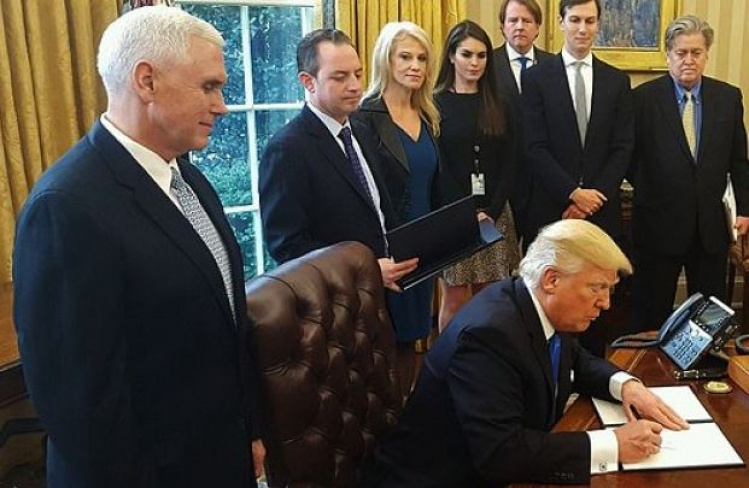 Income inequality was a hot-button issue in the run-up to the November election, but it was swept under the carpet when the working classes opted for an apparently strong leader in the Putin and Mussolini mold of demagoguery. It remains to be seen how that choice will play out across a broad range of policy issues, but the tax proposals that President Donald Trump and the Republicans are offering are heavily weighted toward increasing after-tax incomes for the very wealthiest people. Those windfalls will almost certainly be financed by cuts in health care, tuition aid, and income support for the lower half of earners.

Wealth inequality, or a household’s net assets, is even more skewed toward the upper crust than income inequality is, and is arguably the more important index. It is a household’s assets that provide the fallback for episodes of unemployment, serious illnesses, and other life crises. In today’s United States, the wealth share of the richest has been growing by leaps and bounds, to the point where the top tenth of one percent of households holds a substantially larger share of wealth than the bottom 90 percent. Virtually all the wealth of the bottom 90 percent is held by those in the 50 to 90 percentile groups, so the bottom half of the population has essentially no wealth at all.

The inequality debate has usually been framed in terms of incomes, due to the work of two economists, Emmanuel Saez and Thomas Piketty. They have developed complete datasets on the pretax incomes of the country’s top earners from 1913 to the present that highlight the shockingly large share of the national income that goes to very small slices of the population.

Statistics on wealth are much more difficult to collect. Tax returns show taxable interest, dividends, and capital gains, but not the underlying accumulated assets. But Saez and a colleague, Gabriel Zucman, have recently produced an impressively complete set of wealth statistics primarily by applying “capitalization ratios” to the capital income in the tax data. For example, if a household listed $1,000 in interest income, and the average interest paid in that class of asset was 5 percent, then that suggests that the household has $50,000 in interest-bearing securities. The true virtuoso work, however, is the assemblage of non-tax data to capture the value of assets that do not pay current income, like a house or a pension. All of the methodologies have been laid out in the literature, and while there are still gaps in the data, like overseas tax shelters, there is good agreement with high-quality but narrower data collections, like the Census Bureau’s Survey of Consumer Finance and the Federal Reserve’s U.S. Financial Accounts.

The wealth dataset gives a fine hawk-eye view of shifting wealth patterns. The 1920s were a time of spectacular manufacturing productivity—Ford-style mass production was spreading throughout the economy—but the gains in both wealth and income were disproportionally captured by the upper classes. That changed with Franklin Roosevelt’s New Deal. Minimum wage laws, organizing rights, collective bargaining, Social Security, unemployment compensation, and steeply graduated taxes on the very rich pushed the wealth holdings of the bottom 90 percent of households—Saez and Zucman call them the “middle classes”—from about 20 percent of all the wealth to 35 percent by the mid-1980s. With the accession of Ronald Reagan, and the Republican moralizing of “free market values,” the wealth share of the middle classes plummeted, to the point where it is now (2012 data) only 23 percent, and still falling as a consequence of growing debt and collapsing home prices.

The concentration of wealth at the very top—the one-hundredth of one percent richest households—is something new. Even the wealthy folks just under the top 1 percent are seeing their fortunes slip on a relative basis, as more and more money is funneled to America’s new royalty. That process is now self-reinforcing, for the simple reason that the mega-rich save much more of their incomes than the merely very rich do.

The chart above shows the distribution of wealth shares and average household holdings in 2012. Note the pattern of the distribution. The top tenth in each bracket commands about half of the total wealth in the bracket. Time for a revolution?