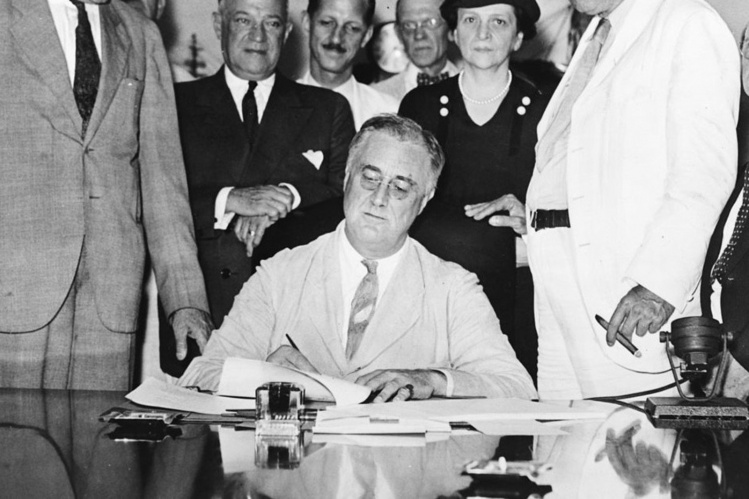 The New York Times recently delivered a full-page reminder that we are coming up on crucial policy decisions about Social Security that may show the world what kind of a country the United States really is. In 1983, President Reagan signed off on a set of fundamental reforms to the Social Security system: raising payroll taxes on the wealthy, taxing the Social Security payments themselves, raising the age for eligibility, and a host of minor fixes that brought the system into rough balance over a seventy-five-year actuarial period.

As of today, the trust funds have some $2.9 trillion of cash reserves funded by payroll taxes and interest on the system’s reserves. Coincidentally, 2019 is the last year that taxes will fully cover the cost of the system. From here on out, the system will have to dip into its reserves, which should last until about 2035. After that, to keep the system solvent, monthly payments would have to be cut by about a quarter.

That is a big deal. Elizabeth Warren (D-Mass.) points out that a third of Americans on the verge of retirement have no savings at all, while another third have total savings that are less than their annual income. Once upon a time, companies furnished loyal employees with pension plans. No longer. Now the more enlightened companies make available a sum of money that their employees may match, putting the onus of financial planning on the employees. And only a third of American employers do even that much: 44 million workers have no fallback at all—except, that is, for Social Security. Congressional Republicans say they want to reform the system, but not in order to strengthen it. They want to cut Social Security benefits, presumably to protect the $1.5 trillion tax cut they passed in 2017.

One would think that America is a poor country, with its shambolic infrastructure and its third-rate schools. But perhaps it’s just a mean-spirited country, or perhaps just the Republicans are.
sharetweet

One would think that America is a poor country, with its shambolic infrastructure and its third-rate schools. But perhaps it’s just a mean-spirited country, or perhaps just the Republicans are. Occasionally, if I’m with other business people and the conversation turns to politics, I’ll ask whether they think people pay higher taxes here than in other countries—counting all taxes, not just federal. Where, I ask, do they think we rank? Invariably, they guess we’re among the most highly taxed countries. They’re wrong. The OECD (Organization for Economic Cooperation and Development) is the official bookkeeper of such things. Of the thirty-four countries it ranks, the United States usually comes in fourth or fifth from the bottom, near much smaller countries such as South Korea and Mexico.

The United States is a paradise for the rich because they get to keep a great deal of their money. Consider: over the past forty years or so the top 10 percent of earners have increased their share of income from about 7 percent to about 18 percent. But that doesn’t quite convey the extent of the problem. If you break down those figures, you’ll understand what being rich really means. Start with the top 10 percent of earners, and take the bottom half of that—between the ninetieth percentile and ninety-fifth percentile. That segment covers a range of incomes between $124,000 and $180,500. If your family is in that range, your parents may still have to borrow to pay for your college tuition. The next band is the 4 percent between the ninety-fifth percentile and the ninety-ninth, spanning incomes between $180,500 and $443,000. The top 1 percent is anything over $443,000. But you could create another band that starts at $2,000,000, and another that starts at $200 million.

How is the bottom half doing? A series in the New York Times examined the numbers since 1980. For the past forty years, the lower 50 percent of income earners improved their lot by an average of $5 a year. Think about that. And then think about how, during the same period, earners in the top tier have tripled their incomes. And then think again about how the Republicans are looking for new ways to cut away the fat in Social Security.

God bless Elizabeth Warren. She and some of the new Democratic members of Congress are not ducking the challenge. Warren wants to create a surtax on income over $250,000 so that we can put an end to Social Security cuts forever. That might or might not be enough, but there does at least seem to be a new momentum for finding a lasting solution to the problem.