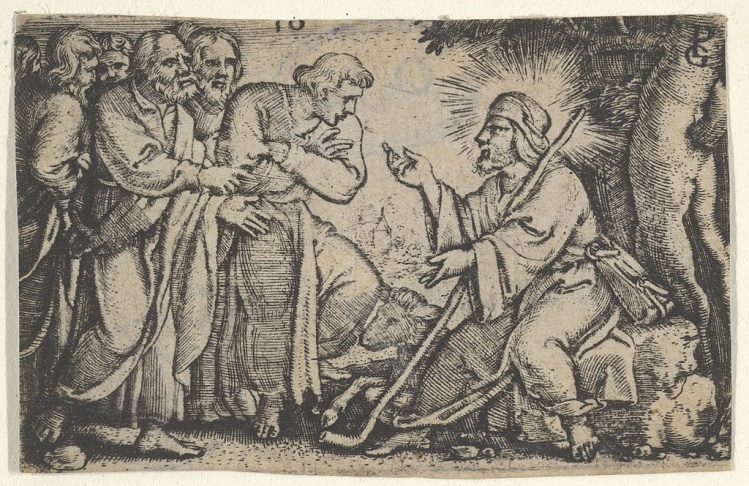 Christ Speaking to the Disciples, from The Story of Christ (Metropolitan Museum of Art, Bequest of Grace M. Pugh)

In a brief commentary at the Catholic Thing, Fr. Gerald E. Murray rebukes Cathleen Kaveny and Fr. Anthony Spadaro, S. J., for contradicting the “plain meaning” of Christ’s teaching about divorce and remarriage at a recent conference on Amoris laetitia. (For background on the conference, see my colleague Matthew Sitman’s report.) Murray, a canon lawyer, has been a vocal critic of Amoris laetitia since its publication, and his criticism of Kaveny and Spadaro is really just an extension of his earlier criticism of Pope Francis and Cardinal Kasper. Responding to Kaveny’s claim that “we do not need to disturb Jesus’ teaching in order to refine and develop it,” Murray writes:

Jesus’ teaching cannot be disturbed…but it can be ignored or falsified. The admittance of invalidly married couples to Holy Communion is not a refinement or development of that teaching, it is a betrayal. One can claim to uphold a teaching by refining and developing it in a way that totally changes its meaning, but such a claim is false. Either adultery is always wrong, or it is never wrong. There can be no middle ground. To redefine some forms of adultery as not adultery is an offense against the plain meaning of Christ’s words. It’s wishful thinking that endorses immorality and would have the effect of destroying the unity of faith taught by the Church.

Murray is outraged by Spadaro’s statement that “it is no longer possible to judge people on the basis of a norm that stands above all.” Murray calls this “a direct contradiction of how the Church has always understood Christ’s teaching.” For him, judging people on the basis of norms “that stand above all” is what the Church is all about. It is, if you like, the Catholic thing, without which the faith would crumble into incoherence and irrelevance. “It’s horrendous,” he writes, “to suggest that Christ’s teaching should no longer be preached in its plain sense as taught from the beginning by the Church….. I am reminded once again of the title of Cardinal Sarah’s book God or Nothing. That is what it comes down to as we experience, with sadness, this escalating crisis over the meaning of God’s truth about marriage, divorce, adultery, and Holy Communion.” Why would the current controversy over sacramental discipline, relegated to a footnote of Amoris laetitia, remind Murray of the title God or Nothing? Because “there can be no middle ground”: on one side there is God and His Holy Church and its unchangeable code of conduct, rooted in the Gospel and unambiguously presented in canon law. On the other side—the side of such people as Kaveny and Spadaro—there is Nothing, an abyss of betrayal and deception seductively presented as mercy.

Murray’s position has the undeniable appeal of clarity and simplicity. His is the sober, straightforward tone of someone insisting on an inconvenient truth. That tone is rhetorically effective because most of us, whether we call ourselves liberals or conservatives, have become suspicious of any theological argument that seems designed to make Christianity as easy and inoffensive as possible. Murray is more suspicious than most. He demands straight answers and is quick to spot any equivocation passing itself off as a nuance: “Either adultery is always wrong, or it is never wrong…. To redefine some forms of adultery as not adultery is an offense against the plain meaning of Christ’s words.”

However uncommon in practice, the Pauline and Petrine Privileges demonstrate the tension between the Church’s actual tradition and the rigorists’ cut-and-dry reading of the Gospel.
sharetweet

In fact, this bluff, no-nonsense declaration is really just question-begging (the meaning of “adultery” is precisely what’s in dispute), but let that pass. Let’s also put aside the question of whether Christ himself made an exception to the prohibition against remarriage (as he at least appears to do in St. Matthew’s Gospel). For the sake of argument, let’s agree that there can be no middle ground, and that the dominical teaching on divorce and remarriage is as obvious and severe as Murray insists it is: all valid marriages are indissoluble, and anyone validly married who enters into a second marriage is guilty of the mortal sin of adultery. It follows that no remarried Catholic, unless he and his second spouse live together as “brother and sister,” can receive Communion. It’s as simple as that.

Except that, in the real history of the Catholic Church, it hasn’t been. Canon law—in particular, canon 1143—states that “a marriage entered into by two non-baptized persons is dissolved by means of the pauline privilege in favor of the faith of the party who has received baptism by the very fact that a new marriage is contracted by the same party, provided that the non-baptized party departs.” In other words, a convert is free to remarry as long as her first, unbaptized spouse gets out of the way. Note that this is true whether or not the first marriage was valid. Following the same logic, what used to be called the Petrine Privilege allows a pope to dissolve a valid marriage between a baptized person and a non-baptized person so that the former can marry another Christian.

As a canon lawyer, Fr. Murray is obviously aware of these exceptions to the church’s general rule that all valid marriages (whether or not sacramental) are indissoluble. And he must also be aware of these exceptions’ venerable history, which goes all the way back to St. Paul’s instructions in 1 Corinthians 7:15: “If the heathen partner wishes for a separation, let him have it. In such cases the Christian husband or wife is under no compulsion.” If Fr. Murray is right about “the plain meaning of Christ’s words,” then the Catholic Church has been condoning a narrow category of adultery for much of its history. Why does this not bother him? Or does it? As far as I know neither he nor any of the other prominent critics of Amoris laetitia have spoken out against the Pauline and Petrine Privileges. Maybe this is because they consider these two exceptions so rare as to be negligible. In that case, it is worth pointing out that the kind of exceptions Cardinal Kasper and Pope Francis seem to be proposing could also be quite rare. (Neither of them has ever suggested that all divorced and remarried Catholic should feel free to receive Communion.)

However uncommon in practice, the Pauline and Petrine Privileges demonstrate the tension between the Church’s actual tradition and the rigorists’ cut-and-dry reading of the Gospel, which pretends to admit of no exceptions. Logically, even one real exception is one too many for their position. If they are honest, they will either condemn the time-honored “privileges,” or stop pretending that the pastoral exceptions suggested by Amoris laetitia are an unprecedented departure from Catholic tradition. As Fr. Murray would say, there can be no middle ground.