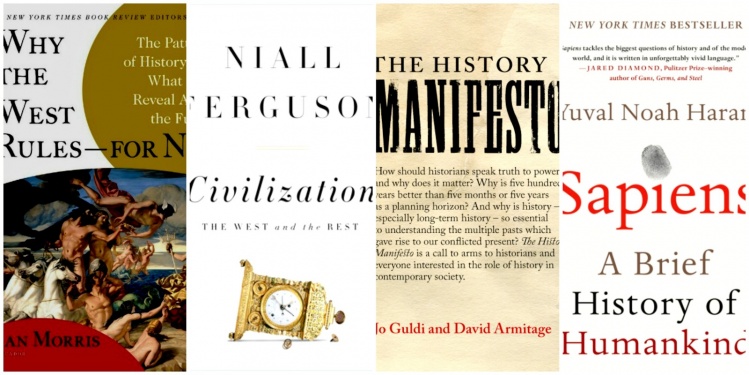 I couldn’t have been the only historian somewhat perplexed by Jo Guldi and David Armitage’s claims in The History Manifesto (Cambridge, Free Download, 166 pp.). They grumble that in the past fifty years or so academic history has become rather boring: too narrow and specialized, preoccupied with dusty archives, and unconnected to real issues. One reason for this, the authors suggest, is that historians fail to take the long view when addressing contemporary concerns: “A specter is haunting our time: the specter of the short term,” they observe. Instead, historians need to explore the “deep past” of climate change, governance, and inequality, lending their expertise to public-policy debates. They also should debunk national mythologies, stripping away the patriotic pieties that prevent us from seeing our situation clearly. Only by uncovering the historical origins of present problems can we find our way to a better future. Or so their arguments go.

My own work, I should add, which includes monographs that span up to six hundred years of history, are not the kind of books Guldi and Armitage have in mind. But some others I have read in recent years are what they hope for, and their presence seems to drain the Manifesto’s charge of at least some of its force.

I think first of Ian Morris’s stunning 2010 book Why the West Rules—For Now: The Patterns of History and What They Reveal about the Future (Farrar, Straus, and Giroux, $35, 768 pp.). By means of a numerology that would have amused the Venerable Bede, Morris develops a Social Development Index (SDI) comprised of energy capture, organization (i.e. government or its analogues), war-making capacity, and information technology; he then applies it chronologically, from the advent of agriculture twelve thousand years ago to today, as well as comparatively, by setting China and Euro-America off against each other. The SDI has risen from 4.36 to 906.37. Over time regions lead or lag according to their relative shares of the aggregate SDI. East and West exchanged leadership several times but the West took a decisive lead with the advent of industry and the mastery of fossil fuels. In this account, genius, or culture had nothing to do with it at any stage. It was all geography: “maps, not chaps.” He believes that the next forty years will be the most important in history. The Manifesto’s authors would be happy: Deep past assesses the present and projects the future.

Published just a year later, to slightly less fanfare, is Niall Ferguson’s Civilization: The West and the Rest (Penguin Books, $18, 432 pp.). Ferguson goes back five hundred years and asks how it was that a prudent gambler could have bet on China’s or the Ottoman Empire’s future prospects and yet lost his wager. He finds the answer in the six “killer apps” developed by the West: competition, science, the rule of law and representative government based on property rights, modern medicine, consumerism, and the work ethic. These issues constitute a fair assessment of the central themes of most “Western Civ” courses that, until recently, prevailed in American universities and an objective assessment of the dominant facts of world history since 1500. Current orthodoxies, however, consign Ferguson’s views to the outer darkness: no condemnations of oppression, racism, sexism, colonialism (Ferguson is notorious for saying a few good words on behalf of empire), and so forth. But the Manifesto’s authors would be puzzled. Ferguson thinks western humanity may be doomed by its own “pusillanimity.” Moreover, now everyone can download the “apps.”

Sapiens: A Brief History of Humankind by Yuval Noah Harari (HarperCollins, $29, 443 pp.) is an engagingly written romp through the cognitive, agricultural, and scientific revolutions. We, homo sapiens, are apes who prevailed. Seventy millennia ago we spread from west Africa and acquired cognitive skills that permitted us to surpass other human species. Darwinian fortune was entirely responsible for such developments. About twelve millennia ago, for a variety of complex reasons, humans developed agriculture, one of history’s great frauds: it tied people down, restricted their diet, and regulated their daily existence. Nevertheless, humanity flourished. Then with the Scientific Revolution humans gained a degree of control over themselves, each other, and the environment that had previously been unthinkable. We created empires and markets, which have dominated the last two centuries. But are people happier? That is what Harari, and in some respects the Manifesto’s authors, believe that historians should be addressing. What do such epochal changes mean for us the living? As he concludes, Harari ponders whether homo sapiens will continue to evolve.

These books offer two rewards: a huge amount of fascinating information and an opportunity to think hard about history and being human. But they prompt some questions too. None addresses topics that have long interested historians: art, literature, philosophy, religion. Human beings figure in these books essentially as automatons and biochemical machines, moved along by inexorable forces over which they have no control. History, as an intellectual discipline, tends toward the rational, material, and secular. Perhaps when taking the long view, historians should begin with their own presuppositions and preoccupations.