Not Just for Kids 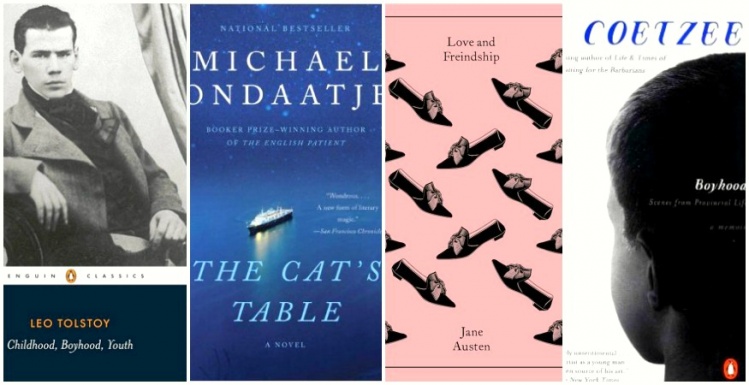 In her mid-teens, Jane Austen wrote Love and Freindship (available in several editions). Virginia Woolf admired this substantial jeu d’esprit for its maturity and the “rhythm and shapeliness and severity of the sentences.” Austen was, Woolf states, already “writing.”

Austen in fact shows herself freakishly inventive and energetic for her age, producing a great exception to the rule that juvenilia are of interest mainly for biographical and historical reasons and won’t reward a quest for deep literary enjoyment. Although misspellings (including the one in the title) certify that this is a teenager’s composition, it masterfully tramples early novelistic conventions of many kinds and provides a full-blown parody of romantic pretensions long before the Romantic writers had put them fully into practice.

A fierce though smiling opponent of pre-Romantic noble savagery, young Jane depicts her protagonists revealing their most private concerns (especially the faults of their elders) to people they’ve just met; punctiliously tormenting their parents; running up debts they would “blush” to pay; pushing an innocent girl into a catastrophic elopement on the grounds that her respectable fiancé is not tortured with passion for her; and “gracefully,” self-righteously, and operatically stealing money. Habitually, the young ladies faint, undeterred by the health hazards of lying in chilly evening dew. Good times!

Leo Tolstoy’s first published works were the trilogy Childhood, Boyhood, Youth, which appeared in the 1850s. The Penguin Classics edition ($17, 336 pp.) provides an excellent introduction, plus notes and other supplementary material, courtesy of the translator Judson Rosengrant. The translation itself is engaging, which is particularly commendable in light of the inherent difficulties to which the English title alerts readers. It is the traditional English title and so can’t be altered without confusing booksellers, librarians, and all their clients—but what is the difference between “childhood” and “boyhood”? And what exactly does “youth” refer to? An aristocratic Roman was “young man” until middle age. What about an aristocratic Russian?

In any event, I would recommend approaching the Russian novel through these works, and not through War and Peace or Anna Karenina. Childhood is so persuasively autobiographical that it was at first (after some rewriting behind Tolstoy’s back) retitled The Story of My Childhood, much to his disgust. The author doubted anyone would care about the story of his individual childhood. But the physical and emotional immediacy of the scenes, along with the sometimes abrupt and inconsequential narrative, seems (to me, anyway) more “real” than the results of Tolstoy’s later and much more grandiose pursuits of defining history, preaching ultimate truth, and accessing human perfectability. Here he is only telling a story, but he does it with such vividness that you come away from this book wishing he had stuck to writing about his personal experience.

Even in translation, Tolstoy’s writing appears to dance over the cultural gap and secure the reader’s assent (“Yes, this is the way things are”) for some extreme differences between his world and ours. In this rich family, how could the narrator’s sister, the father’s favorite, have been so badly nurtured that she grew up scrawny and with the visible signs of rickets? Her brothers are both sturdy and healthy. These questions don’t stick in the mind as much as does Lyubochka’s knocking on the bedroom door and asking “May I join us?” as her male relatives linger in the morning in their nightclothes, chattering.

Similarly, the narrator testifies convincingly to the ecstasy of making the slow, secret rounds of home on summer evenings as the estate shuts down. Oblivious to the heat and the damp, the insects and the prickles, he self-hypnotically picks and eats raspberries in a hidden, overgrown patch. Facing the adult world, he develops a purportedly all-sufficient ethic of comme il faut, which he is convinced will get him through even his university mathematics exams. It is all rather bizarre, but in its profound silliness and silly profundity, it really is like being young.

The Ceylon-born, Canadian-naturalized novelist Michael Ondaatje, whose best-known book is The English Patient (1992), recently published what might be called a magical-realistic childhood autobiography, The Cat’s Table (Vintage, $15.95, 288 pp.). Three boys, unsupervised on a voyage from what is now Sri Lanka to England, are relegated to the table farthest from and most inferior to the captain’s. But the fellow passengers they meet there help to make this an outrageously adventurous passage for them. Ondaatje protests (rather formulaically) about the fictional nature of the narrative, but it contains many things that ring true: the contrast of the vivid vastness of seas, straits, and ports with the confinement and pettiness of shipboard life; the biblical scale of mischief on the part of children traveling on their own among distracted adults; and the adults’ enthralling and ensnaring preoccupations. The trail-off into distant disappointments and melancholy toward the end of the book is a letdown, but not ruinous.

Among the works of the Nobel Laureate J. M. Coetzee (disclosure: I knew him at the University of Cape Town, and he has recommended my poetry and translations), my idiosyncratic favorite is Boyhood: Scenes from Provincial Life (Penguin, $14, 176 pp.). Like Tolstoy, Coetzee produced a series of unflinching, emotionally resounding autobiographical accounts of his childhood and youth. Overall, Coetzee’s accounts are more uneven, but his rendering of a child’s mind in Boyhood seems to me unsurpassed.

His speaker, a little boy in a white South African suburb, identifies with, fears, and has contempt for his mother’s rebellious attempts to make a bicycle her regular transport. She believes this will make her “free.” For his part, he resolves to kill himself rather than enter the secondary-school curriculum in Afrikaans, as officially required of an ethnic Afrikaner: he is English-speaking, and horrified at his brutish Afrikaner classmates. He struggles to see himself the way his teachers see him, as a promising, well-behaved student. The self he contains so well is too panicked and too lonely.

Coetzee’s better known works are wildly imaginative fables of brutality and guilt. In Waiting for the Barbarians, the protagonist is tortured by his own people as a result of his efforts to understand the experience of a damaged captive and to give her personal recompense. The Life and Times of Michael K is about a buoyant African’s homelessness, starvation, and captivity amid a civil conflict and its aftermath. In Foe, the female counterpart of Robinson Crusoe takes charge of Friday and wonders why and how his tongue was cut out. Coetzee’s pure, spare, contemplative prose always saves such stories from descending into melodrama and keeps them in a place of peaceful inquiry into the human condition. That in Boyhood this prose and these concerns are applied to an outwardly ordinary beginning of a relatively privileged life makes the book especially beautiful and suggestive.