A Spiritual Work, a Saint, a Jumpstart for Prayer 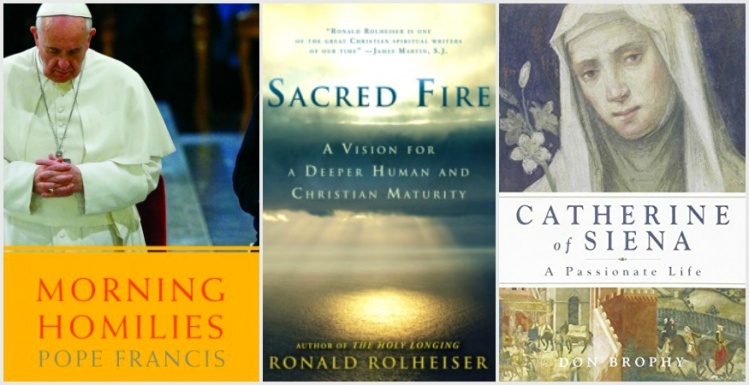 When I was a Jesuit novice, my spiritual director had a rule about retreats: no reading until after your final prayer period at night, and then only the lives of the saints. It sounds draconian but makes sense. If you are bored on a retreat, losing yourself in a book is more appealing than walking around the retreat house grounds, and a good book can sometimes distract you from noticing something about God as you, say, wander aimlessly.

But lately I’ve been looser with that rule. I’m not sure if it’s a sign of spiritual progress or regression, but these days on retreat, in between prayer periods, I allow myself to read.

This year I read three wonderful books: one a spiritual work that I had already read twice, one a life of a saint, and one a jumpstart to prayer when prayer needed jumping.

At this point I have now read Ronald Rolheiser’s Sacred Fire: A Vision for a Deeper Human and Christian Maturity (Image, $25, 368 pp.) three times. It’s hard to know where to begin to praise this book, a follow-up to his wildly (and justly) popular The Holy Longing, which I commend to anyone wondering how to begin a Christian spiritual life. By contrast, Sacred Fire focuses explicitly on the second half of life. Father Rolheiser diagnoses the ills of the season when youthful experimentation is over and we settle into a life of responsibilities: “We carry the car keys, the house keys, and the debt for both.” It’s a tribute to his insight that, as someone with neither money, nor a car, nor debt, I know what he means. Boredom, the longing for a second honeymoon, certain disillusionments and midlife crises can eat away at our spirit “like rust on iron.”

Yet though these times seem burdened with responsibilities, Rolheiser shows us a path to vitality, freedom, and generativity. Key to that path is asking ourselves three questions: What is the wisest thing to do? What would I most like to do? And what do I have to do? “Life-giving decisions,” he says, “are often contingent upon our most carefully weighing the last question.” Real life “depends upon staying the course.”

It also depends on remaining open to change and not being threatened when younger men and women come along to take our place. In those situations we have two options: we can resist these people, setting up barriers to their growth; or we can “bless” them, mentor them, and see the fulfillment of our desire for the good of the community.

One person who threatened almost everyone she met was St. Catherine of Siena, the great mystic and reformer. I’m mortified to say that I knew little about St. Catherine other than her fierce challenges to church leaders during the Avignon papacy: “Be a man!” she wrote to Pope Gregory IX in 1374, urging him to return from exile to Rome.

Fortunately, in the retreat house library was a copy of Catherine of Siena: A Passionate Life (Blue Bridge, $14.95, 304 pp.), in which Don Brophy brilliantly recreates the world of fourteenth-century Siena in all its color (and dirt, it should be said). From almost the beginning of her short life Catherine was an unusual child, and her later confrontations with church leaders were foreshadowed by an abundance of youthful confidence. Her desire to become, in essence, a cloistered nun in her own house was fiercely opposed by her parents. Recalcitrant parents, by the way, were the lot of many saints: St. Aloysius Gonzaga’s father threatened to have him flogged for entering the Jesuits and St. Thomas Aquinas’s mother sent her other sons to kidnap him and prevent him from entering the Dominicans. (She preferred the more respectable Benedictines.)

Brophy also reminds us of the value of physical space for Catherine at a time when privacy was rare. “A room of one’s own,” he writes, “was a great luxury.” And he sensitively recounts spiritual practices that today would be seen as not only dangerous but perhaps disturbed, like her austere eating habits, and situates them in her time and place. Overall, it’s a fascinating and beautifully written book about a mulier fortis.

As I read on, I wondered what Catherine would say about Pope Francis, the author of the third book I read on retreat. My sense is that she’d be delighted by his call for reform. On the other hand, she was a severe critic of most popes, so she’d probably find something to dislike!

As for me, I’m a particular fan of Francis’s daily homilies, which are disseminated by the L’Osservatore Romano, Radio Vaticano, and nearly every other Vatican outlet. As much as I loved reading his encyclicals Evangelii gaudium, Laudato si’, and other writings, these reflections, given every morning at the Casa Santa Marta, the hostel in which he lives, constitute his most effective verbal communications. Almost every day a fresh insight about a familiar Scripture passage stops me in my tracks. Happily, they have been collected in Morning Homilies (Orbis Books, $18, 240 pp.). (There is at least one other version of these same reflections: Encountering Truth, published by Image.) The one downside is that since Francis often preaches without notes some of the homilies, particularly the earlier ones when the Vatican was just beginning to disseminate them, are more summaries than a transcript of what he actually said. But they still shine.

On second thought, Catherine would probably be delighted by Pope Francis. And while she was severe, she was also generous, so she’d forgive him his faults. And that’s all to the good. To quote one of the pope’s morning homilies, “How beautiful to be saints, but also how beautiful to be forgiven.”

James Martin, SJ, is editor at large of America and author of the new novel The Abbey (HarperOne).