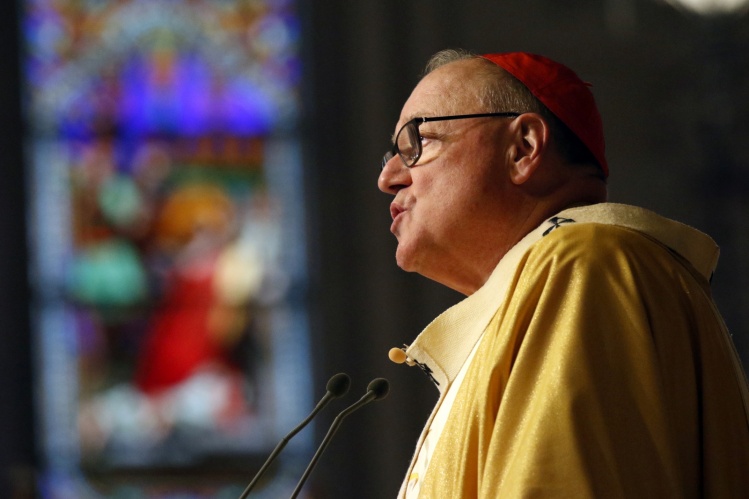 Crisis reveals and clarifies. At a time when Catholic bishops, public intellectuals, and editors need to speak and act with moral clarity more than ever, the past month has seen such leaders doing the opposite. The cardinal of New York cozied up to the president. Editors at a respected national Catholic publication abruptly removed articles critical of the cardinal from their website. A prominent conservative Catholic commentator used Twitter to mock people who wear protective face masks. If anyone still wonders why young people continue to leave the church, and why many of us who stay are often anguished by our fellow Catholics with pulpits and platforms, the evidence is not hard to find.

On a phone call between Catholic leaders and President Trump that went public after a report in Crux, New York Cardinal Timothy Dolan seemed barely able to contain his enthusiasm for a president who uses cruelty as a political weapon, energizes white supremacists, and degrades anyone who challenges him. The cardinal defended his chumminess on the call, and follow-up cheerleading for the president on Fox News, with the kind of false equivalency that often characterizes many bishops’ engagement in politics. “Look, are we in the sacred enterprise of accompaniment and engagement and dialogue or are we not? When you do it, you risk criticism from both sides,” Cardinal Dolan said in response to critics, specifically, those two thousand Catholics—including religious sisters, clergy, and theologians—who signed an open letter released by my organization, Faith in Public Life.

Bishops and other faith leaders have a right to engage with the White House. What Cardinal Dolan fails to acknowledge is the difference between “dialogue” or “accompaniment” and deferential coziness. When Trump boasted he was the best president in “the history of the Catholic Church”—and urged those on the call to get out the vote for his reelection— not one of the six hundred Catholic educators and bishops even politely pushed back against the president. That silence sends a message, even if unintentional, that church leaders will accommodate racism, misogyny, nativism, and cruelty in exchange for anti-abortion judges and funding for Catholic schools. We should expect more from bishops than transactional politics.

Cardinal Dolan’s defense that he sometimes applauds Democratic politicians and gets criticism from both the right and left isn’t a satisfactory response. While it’s true that neither political party fully reflects the expansiveness of Catholic social teaching, this default framework is proving inadequate to the urgency of the Trump era. False equivalency prevents us from speaking honestly. It’s one political party that has been twisted into the image of a demagogue who abuses power. It’s one party now defined by right-wing nationalism rooted in reactionary white resentment toward an increasingly diverse society. It’s one party obstructing policies that confront the existential threat of climate change. It’s lawmakers from one party who continue to put up barriers to voting rights. All of this is done by Republicans who call themselves “pro-life.”

Moral integrity is not easily regained once it’s squandered.
sharetweet

“But what about abortion?” This is the rejoinder from many who dismiss or deny the fact that the Republican Party has been taken hostage by those who have little regard for defending human life and dignity in its broadest sense. It’s true that many leaders in the Democratic Party have moved from a “safe, legal, and rare” position, and now even seem skeptical of how President Obama rhetorically framed the need for common ground and abortion reduction. As I wrote in Commonweal last year, the absolutism of both parties reinforces polarities and has left little space for a conversation about abortion that doesn’t devolve into tribal politics. But when church leaders define abortion as the “preeminent” issue for Catholic voters, as bishops do in their Faithful Citizenship election-year document—and have failed to substantively update that guide even after the elections of Pope Francis and Donald Trump—the church’s moral witness in the public square shrinks in ways perfectly suited to manipulation by politicians with agendas hostile to most principles of Catholic teaching.

As public criticism of Cardinal Dolan’s flattery of Trump grew, the editors of U.S. Catholic—published by the Claretian Missionaries—responded in a particularly troubling way. Without explanation, the magazine abruptly deleted from its website two articles from respected scholars critical of Dolan and the bishops’ call with Trump, one by Stephen Schneck, a retired Catholic University professor who is the executive director of the Franciscan Action Network, and the other by Steven P. Millies, director of the Bernardin Center at Catholic Theological Union. After the National Catholic Reporter broke the story, Millies wrote on Twitter that he would never write for U.S. Catholic again: “I think contributing to the debate as a public intellectual is more needed now than ever.” (The National Catholic Reporter subsequently published both of the deleted articles.)

Meanwhile, another Catholic editor used words that were reckless in their own way. R. R. Reno of First Things launched a series of tweets in which he called the wearing of protective face masks, as recommended by public-health experts, a “PC gesture” and a form of “cowardice.” He contrasted people who “want to cower in place” with those “who want to live.” After days of criticism in Catholic and mainstream media, he issued a brief apology for what he called his “foolish and ill-considered remarks.” Yet by then Reno had already displayed his contempt for the common good, if not his reckless libertarianism, in a series of “coronavirus diary” entries on the First Things website, in which he bragged of his unauthorized visit to a New York City emergency room, and belittled social distancing, the wearing of face masks, and other measures meant to protect the public’s health.

First Things inhabits that particular Catholic ecosystem in which the coronavirus is no match for “muscular Christianity” and Pope Francis is a dangerous threat to the church. Consider also the recent manifesto spearheaded by papal foe Archbishop Carlo Maria Viganò, the former nuncio to the United States, which claims public-health responses to the coronavirus are an overhyped “pretext” to deprive the faithful of Mass and part of an assault on religious liberty. The petition, signed mostly by Italian clergy and conservative academics, also warns that efforts to use contact-tracing devices that can help limit the spread of the virus are a “disturbing prelude to the realization of a world government beyond all control.”

Catholics with influence have a responsibility that comes with public platforms and access to political power. Moral integrity is not easily regained once it’s squandered. History will judge our actions today. Where will our Church stand?