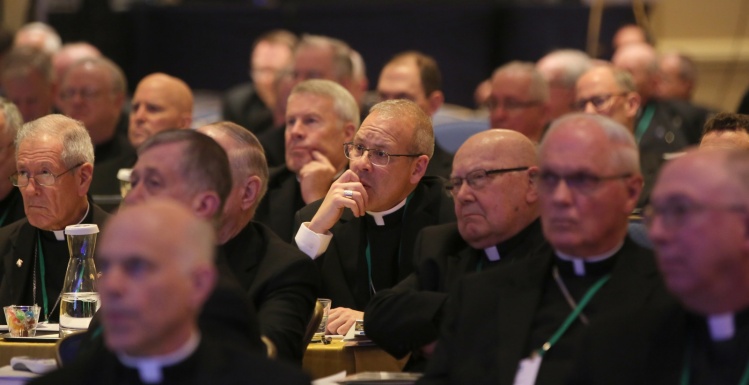 Bishops listen to a speaker Nov. 14, 2018, at the fall general assembly of the U.S. Conference of Catholic Bishops in Baltimore. The bishops will gather for their annual meeting in Baltimore Nov. 11-13, 2019. (CNS photo/Bob Roller)

The bond between Rome and local churches around the world has always been crucial to the Catholic Church’s understanding of itself as universal. From the time of the Council of Trent especially, the ad limina apostolorum—the periodic visit of world bishops “at the thresholds of the Apostles” in Rome—has been one of the ways the church works to ensure the strength of this bond. In a few days, the ad limina visit of the U.S. bishops will begin, and by the time it wraps up in February, we might have a fresh sense of just what the bond between the Holy See and the American episcopate is made of.

After all, it’s not as if there isn’t controversy attending the bishops’ visit. In the course of Francis’s papacy, the dynamic between the U.S. church and Rome has grown increasingly fraught. The case of former cardinal Theodore McCarrick and the subsequent “manifestos” of former nuncio Carlo Maria Viganò brought relations between American bishops and the papacy to a new low. That two dozen bishops came out in support of Viganò, without bothering to defend the pope against his unsubstantiated claims, will long remain a stain on the U.S. church. And given that a significant number of American bishops continue to ignore or actively reject key aspects of Francis’s pastoral priorities—from “Who am I to judge?” to Amoris laetitia to Laudato si’—it’s hard to know whether a meaningful rapprochement will be achieved anytime soon.

The format of the ad limina itself might offer insights into what could transpire. It has changed over time, even just in the decades encompassing the papacies of John Paul II, Benedict XVI, and Francis. Where once a national or regional contingent of bishops visited every five years, that has now become every seven or eight. Under Benedict XVI, personal one-on-one meetings between the pope and visiting bishops were dropped in favor of group sessions involving about ten bishops at a time (though some cardinals and archbishops could still get individual meetings). Benedict also departed from the style of his predecessor in favoring dialogue rather than using the ad limina as a forum for Vatican officials to lecture visiting bishops. Francis does not meet bishops individually; instead, he spends ninety minutes or more with each group, answering questions and offering advice. Nor does he deliver a formal speech—although he does provide the text of a speech. Similarly, the bishops also prepare a formal speech but only provide the text of it. No official papal transcript of the conversations is prepared, so the only accounts of what gets talked about come from the press.

It might also be helpful to look back on the topics of conversation at the two previous ad limina visits, with John Paul II in 2004, and with Benedict XVI in 2011–2012. In 2004, the American church was already engulfed by the sexual-abuse crisis and had promulgated the Dallas Charter. Yet in the exchange between the pope and the bishops, the crisis was not treated or discussed as something that would in fact come to define for our age the perception of the church in the United States. In 2011–2012, Benedict’s speeches reflected the U.S. bishops’ new emphasis on religious freedom, as demonstrated by the formation of the Ad Hoc Committee for Religious Liberty in September 2011 and congressional testimony on the topic by American bishops in October 2011. He touched on a number of the key topics, from conscientious objection on “life issues” to same-sex marriage. But he also addressed intraecclesial issues, such as dissent from the magisterium. He also condemned the failure of Catholic colleges and universities to comply with church requirements, saying that Catholic theology teachers must “have a mandate from the competent ecclesiastical authority.” There is also some historical backdrop worth keeping in mind: at the time, U.S. women religious were the target of two investigations by the Vatican, and the new nuncio to the United States, Archbishop Carlo Maria Viganò, had just arrived in Washington.

Might the bishops allow themselves to be subjected to an extended talk about matters more important than the fixations of the pop-philosopher Jordan Peterson?
sharetweet

As this ad limina gets underway, the papal representative in Washington is Archbishop Christophe Pierre. He has taken a much different approach to shaping relations with U.S. bishops than did Viganò—necessarily, given the current state of the U.S. church. It has not only become more divided; it also includes an increasingly radicalized anti-Francis fringe that has no parallel in the rest of the world. It is dealing with the challenge of accelerating secularization of American society and culture, including secularization among Latino Catholics. Four years after Pope Francis traveled to the United States, the impact of his visit seems negligible, at least on the U.S. bishops. And the unprecedented speech he gave to Congress has all but been forgotten since the debut of Donald Trump’s scandal-ridden, reality-TV presidency.

And yet Francis’s papacy has largely redefined the major issues for the public voice of the Catholic Church: recasting traditional issues (sexuality, marriage, life issues) in a larger context, and highlighting with unprecedented radicalness such issues as care for creation and the poor. On immigration, Francis and the U.S. bishops speak with a common voice, despite the political polarization within the USCCB. While some bishops seem to want to wait Francis out, others have been inspired (or forced) to reconsider their mission. There is a large part of the U.S. church that has not given up on Francis, and thus the ad limina could help reenergize the relationship. Further, the USCCB will be electing the next president and vice president at its November meeting in Baltimore, and with recent important episcopal appointments (Washington) and others still to come (Philadelphia), the timing of the ad limina seems auspicious—enough so perhaps to spur a fresh start.

So what to look for? It’s reasonable for the U.S. bishops to expect that the Vatican will validate their efforts to address clergy sexual abuse. For all the mistakes and missteps of the USCCB and individual bishops, the U.S. church has helped the global church face up to the crisis. The February 2019 sex-abuse summit at the Vatican would not have come about without pressure from the United States—not only from bishops, but also and especially from the organizations of victims and survivors, the laity, the media, and the justice system. The U.S. bishops also expect the Curia to implement the new Vatican regulations to deal with the sexual abusers and failures in oversight among the clergy—especially Vos estis—and to signal some efforts in lessening the resistance by some Curia dicasteries to the “zero tolerance” approach of the U.S. church.

On the other hand, there remains a gap between Francis and the USCCB on ecclesiology and sensus ecclesiae—not just on the hot-button issues, but on the theology and the practice of synodality. As other churches around the world begin to embrace it (Germany with its national “synodal process,” Australia with its plenary council of 2020–2021, Ireland with its local synods, and even Italy), the USCCB seems uniquely resistant to this key aspect of Francis’s pontificate. Synodality is first of all about building community. But technocratic functionalism dominates American Catholic life today—whether it’s the assembly of the U.S. bishops or faculty meetings at Catholic universities. It is striking to see the differences of style between the twice-a-year meetings of the USCCB and the January 2019 retreat of the U.S. bishops in Chicago, to which Francis “invited” the bishops after the breakdown in relations between the episcopate and Rome in the summer of 2018. What does that experience say for how the USCCB conducts its own meetings? Will it even matter? The plenary meetings of the American bishops should not be, nor even look like, the meetings of mere administrators, but of leaders of a church learning how to discern spiritually, as a community of pastors.

And then there is the matter of substance: Will the USCCB find the will to place on its meeting agendas the pontiff’s magisterial texts, such as Amoris laetitia, which has received far less attention than vaporous efforts like the “Fortnight for Freedom”? Might the bishops allow themselves to be subjected to an extended talk about matters more important than the fixations of the pop-philosopher Jordan Peterson—say, the existential threat posed by climate change, and how young people might be evangelized by the church’s concern for our common home?

In his January 2019 letter to U.S. bishops for the week-long retreat in Chicago, Francis wrote: “The loss of credibility also raises painful questions about the way we relate to one another. Clearly, a living fabric has come undone, and we, like weavers, are called to repair it.” The call to repair must also be the informing idea of the coming ad limina visit.