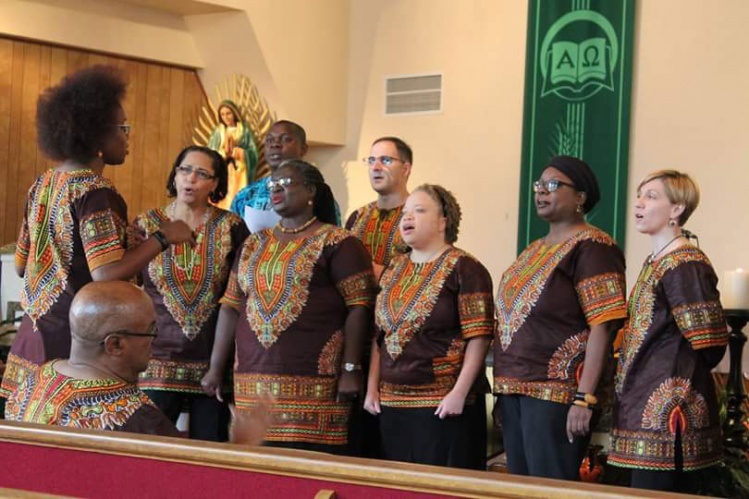 The Mass is a holy event of great solemnity, centered on the Eucharistic sacrifice through which God’s people are fed. It is also an occasion for the exultant praise of God described in the psalms—that practice of communal worship in which the prophet Miriam, joined by the Israelite women, took a tambourine in her hand and went out dancing, proclaiming Sing to the Lord, for he is gloriously triumphant; the worship of David and the house of Israel as they danced before the ark of the Lord with all their might, with singing, and with lyres, harps, tambourines, sistrums, and cymbals.

Practices like these—of praise and worship, of dance and song, of music played on piano and horn, tambourine and drum—are the life of Sunday Mass at the small mission parish that my family calls home. Saint Eugene Mission in Tallahassee is a microcosm of the global church: the first Mass in the morning serves the Spanish-speaking community, and at the Mass we attend the community is mostly black, a mix of Florida natives and immigrants from Africa and the Caribbean. The church is small, its walls mostly unadorned, its windows a rickety frosted glass through which passersby can hear our worship when it reaches its peak.

On this particular Sunday that peak takes a while to come. This is partly because it’s early July in Florida, which means it is close to 90 degrees outside by eleven o’clock in the morning, and the church’s air conditioner can’t quite do what’s needed to make the space truly comfortable. Meanwhile, we are missing our regular music director and several key members of the choir, the piano isn’t properly amplified, and our drummer is late in arriving. So as our worship begins and we sing, Sign me up for the Christian jubilee; write my name on the roll, the atmosphere is still short of jubilant. I want to be ready when Jesus comes—yes, but we are not ready yet. Nothing is working as it’s supposed to. It is hot and we are sleepy; much of the congregation has yet to arrive. Our worship is mostly routine so far—we join in the chorus but are less than expressive in what we sing.

But the liturgy is there to give us a routine, and the highs and lows in its rhythm provide us the time to find ours. As the readings are proclaimed, someone fixes whatever had gone wrong with the piano. The drummer arrives; the pews are gradually filled. The priest, a member of our pastor’s missionary congregation, preaches on the simplicity of Jesus’ message and the promise of rest to those who take on his burden: You have hidden these things from the wise and learned and revealed them to little ones; my yoke is easy and my burden is light. Once it is time for the Sanctus we have found the spirit of the crowd that welcomed Jesus into Jerusalem, their shouts echoing the words of the psalmist: Hosanna! Blessed is he who comes in the name of the Lord! Hosanna in the highest! The piano is loud; drum and cymbals sound; the congregation sways and claps as we sing. Hosanna!

There are some for whom this would seem like too much cacophony for the solemnity of the liturgy.
sharetweet

There are some for whom this would seem like too much cacophony for the solemnity of the liturgy. And no doubt there are things we could do better: our church is drawn from the world, after all, and just as the air-conditioning is inadequate and our instruments sometimes fail us, so we ourselves will fail to find the appropriate posture for worship in the holy sanctuary of the almighty God. But it is just in this context that the activity of worship helps—to captivate us, to overwhelm our distractions, to bring us actively into an attitude of praise and thanksgiving.

The Mass has now gone on for well over an hour—my daughters are squirming, but this is one of the many welcome differences from the businesslike and efficient approach to liturgy at the parish we attended before this one. We are here to worship: it will start when we are ready and end when we are done. Why keep watch for only an hour? Why not ninety minutes or more?

Visitors are asked to stand and introduce themselves: a Spanish-speaking family from Orlando; some college students from Florida A&M University, where our church serves as the Catholic student center; a family visiting from Brazil. Those who are celebrating birthdays come forward for a blessing, and the congregation sings and claps for them. We are reminded that there will be refreshments in the church hall after Mass: not the coffee and donuts I grew up with, but black-eyed peas with salsa and fried dough, and fruit punch and watermelon for the children. We are also to bring food and drink next Saturday evening for a grand dinner in honor of the seminarian who has served our church this spring and will be returning soon to complete his studies in the Congo. The lifeblood of this parish is its prayer and worship; these spill over into a spirit of fellowship that all are welcome to partake in.

The Mass is ended. Now the tambourines are out. Rejoice heartily, we were told by the prophet Zechariah in today’s reading. Shout for joy, O daughter Jerusalem! So let us go forth like little ones, clapping our hands and singing as we did when we were young. Let them hear us on the streets. Our light is small, but it was not given so that we would hide it. Let it shine, let it shine, let it shine.