Church of the Nativity
By Catherine Wolff 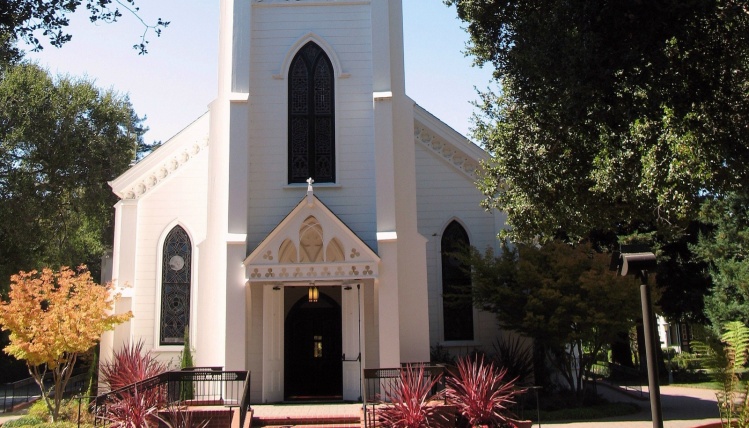 Church of the Nativity (sanfranman59)

I’ve driven by the Church of the Nativity in Menlo Park, California, for twenty years now, inevitably struck by its quaint prettiness: if they had a little church on top of wedding cakes, this would be the one. Built in the 1880s, it is on the U.S. National Register of Historic Places, and deserves to be. It's chapel-scale, pure white in and out, with an exquisite rose window and arches traced in dark wood and pews with little entry doors that make it feel vaguely Anglican.

I’ve avoided this church for as long as I have driven past it, though. If you look it up, what you’ll find is that the pastor is the brother of a former CEO of Intel, and that the graduates of its grammar school eventually go on to attend prestigious colleges. The Sunday bulletin invites you to join the Infant Jesus of Prague Prayer Society and the weekly prayer hour for priestly vocations, and offers Confession with an Opus Dei priest. For me, a social worker from a progressive, questioning family full of Jesuits, such a church was suspect. And I was wary of the local Opus Dei households, said to turn up at 8 a.m. Mass. Wary, but curious, I made my way there one Sunday morning in June.’ve driven by the Church of the Nativity in Menlo Park, California, for twenty years now, inevitably struck by its quaint prettiness: if they had a little church on top of wedding cakes, this would be the one. Built in the 1880s, it is on the U.S. National Register of Historic Places, and deserves to be. Its chapel—pure white in and out, with an exquisite rose window and arches traced in dark wood and pews with little entry doors—makes it feel vaguely Anglican.

The church was half-full of mostly gray-haired, dignified, well-dressed white people, along with one Asian, one Latino, and a sprinkling of children. It made me wonder where the rest of our Catholic family was. The priest was a man, of course, but so was the altar server, the cantor, the lector: no women on that side of the altar, where the table was set high above the congregation.  The music was low-key, a cantor and a pianist leading the congregation in traditional hymns and Mass parts in Latin, but they all sang in full voice, particularly an enthusiastic guy in the pew behind me who broke with Catholic timidity—or is it decorum?—belting out the songs and prayers.

The readings were delivered without expression, although some were fiery: Jeremiah on persecution; the Psalmist on insult and shame. Thereafter came passages on original sin, and on fear, which the priest (wisely, considering the even grimmer alternatives) chose to speak about. I was grateful at first: that day, as on so many recent days, I have felt fear—not immediate fear for myself, but for my grandchildren, for our mother earth and our riven country, for the insufficiently documented people in East Palo Alto who are living in terror of ICE raids.

The priest began his homily with a hurried, mumbled anecdote about people who had confided in him that they were afraid of a certain group in East Palo Alto, and how they really shouldn’t be, and then quickly went on to speak of fear in our personal lives, in our families, and the way it can constrict us and prevent us from living full lives. He was kindly, colloquial, quoting Franklin Roosevelt and the National Catholic Register and Fr. Flanagan. It was comforting as far as it went, but its focus was entirely domestic, and left unaddressed the wider sense of dread so many carry at this time. I wondered if the lovely people around me did not feel such dread—what would that lack of anxiety be like? They looked untroubled, at home in their skins, at home in the world. Who wouldn’t be, living in Menlo Park?

I have often wondered what the people around me in church were thinking, feeling, praying for, especially when I have been at Mass in a foreign land. Looking around at the pretty church and the handsome people at Nativity put me in mind of the many times I have attended Mass in far-off places: the gray bombed-out church in West Berlin full of hunched old women; the entrancing ancient mosaics and reverent pilgrims of Santa Maria in Trastevere in Rome; the schoolhouse-Mass in Ireland with sheep grazing in the cemetery outside; the jam-packed cathedral in Nairobi pulsing with song.

That morning at Nativity, I was indistinguishable from the rest of the congregation; after all I am white, older, and, for that occasion, well-dressed. Indeed, I felt comfortable there: I saw some familiar faces; I speak the language; it is not far from my home. And yet I knew I was too comfortable. The experience I had approached in a curious, vaguely contentious spirit had turned out to be anodyne, acceptable, pleasant. I’d been more moved by the old women in Berlin, felt more in common with the pilgrims in Rome, been more inspired by the musicians in Nairobi. Half the time I’ve had no idea what was being said in these far-off churches, nor could I join in the responses without embarrassing myself. I did not look like the other congregants, and was often acutely aware of how unaccustomed I was to worship so fervently as those around me. You’d think I would have retreated into an anthropological stance, but no, it was in these circumstances that I have felt the vitality of the universal church, the excitement of its extraordinary human diversity. I have felt in our common prayer a kinship with everyone who has ever worshiped in this way, a sense of being in a time-out-of-time—in God’s time.

I did not feel such inspiration at Nativity. And yet, and yet—sitting there, praying along with these attractive, dignified people, I wondered about the lives they brought to the altar, the fears they harbored, the burdens they carried, or, for that matter, their good works and the charity they bestowed on others. I had to admit that I knew nothing about them, really. And fortunately, they did not know that I had brought to their church that day a certain contentiousness based on what I’d presumed to know about them...and had found a measure of comfort, of commonality. It was the way everyone joined wholeheartedly—as though they were Protestants!—in all the prayers and all the songs, in English and in Latin. They gathered me in, and I prayed and sang along, amazed that I remembered all the words: Gloria in excelsis Deo et in terra pax hominibus bonae voluntatis, and Credo in unum Deum, Patrem omnipotentem, factorem cœli et terrae, visibilium omnium et invisibilium. For a while there I was part of one of the many choirs in the Communion of Saints, and grateful for that.

But then the final hymn concluded, and half the congregation, led in stentorian tones by my friend behind me, launched into the long version of the Prayer to St. Michael the Archangel, pleading for his defense against Lucifer, the cruel and ancient serpent who seduces the whole world with his multitudes of wicked spirits who “blot out the name of God...his wicked dragon pours out, as a most impure flood, the venom of his malice on men of depraved mind and corrupt heart, the spirit of lying, of impiety, of blasphemy, and the pestilent breath of impurity, and of every vice and iniquity. These most crafty enemies have filled and inebriated with gall and bitterness the Church, the spouse of the immaculate Lamb, and have laid impious hands on her most sacred possessions. In the Holy Place itself, where the See of Holy Peter and the Chair of Truth has been set up as the light of the world, they have raised the throne of their abominable impiety.”

They lost me there, and I joined the rest of the congregation already moving out the door, smiling and chatting in the sweet June morning.