The USCCB just isn’t into it, and that’s a problem.
By Massimo Faggioli
Clericalism
Pope Francis
Bishops
U.S. Catholicism 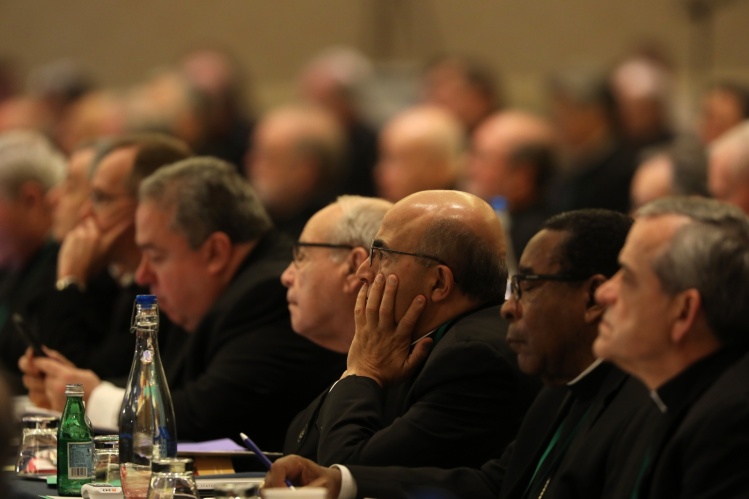 Bishops listen to a speaker during the fall general assembly of the U.S. Conference of Catholic Bishops in Baltimore, November 12, 2019 (CNS photo/Bob Roller).

On May 21, the Bishops’ Synod published a note announcing the steps leading up to the XVI Ordinary General Assembly of the Synod in Rome in October 2023 on the theme “For a Synodal Church: Communion, Participation, and Mission.” It’s a daring project, consisting of synods in every diocese in every country from October 2021 to April 2022, as well as meetings at the continental level from September 2022 to April 2023, before the culminating meeting in a little more than two years from now. In the United States, every bishop must appoint a diocesan contact person or a team for synodal consultation before this October; every diocese will then send its comments to the USCCB, which will prepare a report with the help of a contact person for the synodal process at the national level. In this way, Pope Francis is supporting the calls for synodality in the United States—though in truth there haven’t been that many—like the one from San Diego Bishop Robert McElroy two years ago.

Models of synodality may differ, and it is not yet clear just what concept of the “people of God” applies here. But what these models have in common is the aim of truly listening to all to ensure the participation of all in the synodal process. This necessarily means a rebalancing of power in the Church—not only between the clergy and the laity or between men and women, but also (for example) between the power of money and the contributions of the voiceless. Therefore, even though the bishops are in charge, the synodal process requires a mobilization of the entire Church. Religious orders, lay movements, Catholic colleges and universities, associations of theologians—all have the opportunity to play an important role during the next two years. If everything is left to the vertical institution of the Church, this two-year “synodal process” will simply perpetuate an ecclesiastical order that works only for an increasingly small number of people—that is, for clerics and the clericalized laity.

Nor is it clear how the U.S. bishops or the U.S. Church in general will receive the request coming from Rome. Since November 2020, conversations among American bishops have been dominated by the efforts of part of the episcopate to draft a document about denying Communion to Catholic politicians who support pro-choice legislation (President Biden in particular). From the looks of the agenda for this week’s USCCB meeting, it doesn’t appear that the bishops will be talking about the synodal process they’d need to get started on in just a few weeks. That’s not a good sign, since this is a chance the U.S. Catholic Church can’t afford to miss.

For one thing, the U.S. Church now provides a clear example of the dangerous link between mediatization and sectarian politicization of Catholicism. The capital of digital and social media culture is in the United States, and it’s the global center of disintermediation—the detaching of individuals and communities from intermediaries and institutions of representation—not only in politics and economics but also in religion. Institutions help shape the life of the Church. While Catholicism has now become associated only with the negative aspects of institutions, Church life cannot be completely free of them. What the prophets of the post-institutional don’t realize is that detachment from institutions creates a religious problem, since it contradicts what the Incarnation means for our ecclesial dynamics: verbum caro factum est, “the Word became flesh.” Disintermediation undermines the importance of personal relationships in terms of care, mercy, and compassion. It attacks the very idea of tradition as it detaches us from the need for personal, real encounters that help make sense of tradition as something experienced in a community of real people—including and especially those who do not look or think like us.

Synodality is essential for recovering the legitimacy of ecclesial spaces.
sharetweet

Synodality is essential not only for recovering the legitimacy of ecclesial spaces. It’s also vital in exposing the neo-traditionalist and neo-integralist understanding of tradition that’s contrary to what Catholics believe about communal religious and liturgical experience. Synodality counters a neo-traditionalist idea of Catholicism that is actually anti-traditional, hyper-modern, and incompatible with the theological foundations of the ecclesia. A synodal event in ecclesial spaces where the people of God can meet would save the Catholic conversation from virtualization and expose the ideological extremism responsible for our current ecclesial polarization. Lived synodality (as opposed to the carefully manicured religious identities presented online and through social media) could save the Church from the new demagogy rooted in algorithms that render humanity a commodity. Synodality would allow for a form of ecclesial accountability that does not yield to the tribal and moralistic gnosticism of our online lives, where the perception of the lived dimension is largely shaped by the social media dynamic of “influencing.”

The upcoming synodal process could also counter the risk of sectarianism. On paper it may look like a bureaucratic undertaking, but in fact synodality is about sacramentality and the Church as a sacrament: “The Church is in Christ like a sacrament or as a sign and instrument both of a very closely knit union with God and of the unity of the whole human race, it desires now to unfold more fully to the faithful of the Church and to the whole world its own inner nature and universal mission” (Vatican II, constitution Lumen gentium, paragraph 1). In the long history of the Christian tradition, synods and councils have always had a liturgical core. Before and in addition to the debates and the deliberative sessions, synods are spiritual and liturgical moments. There is an intimate relationship between the Eucharistic-sacramental moment of the liturgical assembly and the synodal moment of ecclesial life; this was clear even before Francis added the Jesuit element of “discernment” to the vocabulary of synodality.

One of the differences between Catholicism and sectarianism is that the Catholic Church is supposed to provide all its members access to the mystery, even when some of them feel they don’t have full access but remain in some way connected to the Church. Maintaining this openness is easier when the institution isn’t obsessing over numbers (“How many people are going to Mass?”) and when there isn’t such a rigid vertical hierarchy from bishops to clergy to laity. In the end, the synodal discernment will be in the hands of the bishops, but a truly synodal experience can bear fruit in time and space, beyond what is immediately measurable. It could also do something in the very near term: synodality is also a response to the sex-abuse crisis, and the liturgical aspect of the synodal events could help us see that the missing element in the Church’s handling of the scandal (especially in the United States) is a sacramental response.

Synodality is crucial to making space for the paradoxical in Catholicism, for a Catholic way to include and sanctify the messiness of the Christian experience. Our Church is in cultural and political crisis, but there is also a crisis of the legitimacy of ecclesiastical structures, so that our encounter with the sacred in communal spaces is itself endangered. That encounter must be experienced; otherwise, people leave, especially if they already sense that the hierarchy is governing access to the sacred through procedural means aimed at exclusion. This is the framework in which we should think about matters like the blessing of gay couples in Germany or Joe Biden’s access to the Eucharist. It reveals the dangers of the non-Catholic understanding of the Church being advanced at the highest levels of the hierarchy.

Envisioning a Conclave in the Era of Trump