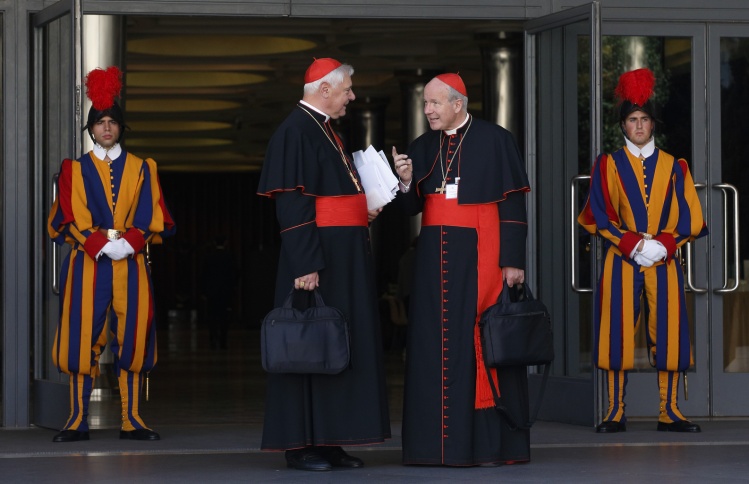 What's news out of today's Vatican press conference? Plenty. First, it was announced that summaries of bishops' amendments to the synod's midterm report have been made public. (Perhaps this will calm those who hyperventilated about the "secrecy" of the synod process.) Second, it looks like the pope is assembling a team of rivals to draft the final synod report: The Vatican announced that Pope Francis has added two people to the committee that will draft the final report on the synod: Archbishop Denis Hart of Melbourne and Cardinal Wilfrid Napier of South Africa--who, you'll recall, criticized the initial draft of the relatio as misleadingly claiming the synod had discussed some subjects that had not actually come up. The Holy See later said in a statement that the report did in fact present an accurate picture of the conversations. (Perhaps this will quiet those who have crowed that Pope Francis is pushing his own agenda at the synod.) Third, the conservative Catholic blogosphere has been lighting up with claims that Cardinal Gerhard Mueller, prefect of the Congregation for the Doctrine of the Faith, had decried the synod relatio as "shameful." This morning the cardinal denied that he said any such thing, claiming that La Repubblica, the outlet that first ran the explosive quote (in a strange, unsourced way), misreported him. (Looking forward to those retractions.) Fourth, the third section English version of the midterm report was edited to replace language about "welcoming" gay people with "providing for" them. The original Italian, however, remains unchanged: accogliere--which means "to welcome."** Fifth, and perhaps most interesting, were Cardinal Christoph Schonborn's comments.

He emphasized that Pope Francis is asking the church to accompany its people, to walk with them, not to judge them. He said that the tensions between doctrine and Jesus' mercy were a "permanent" reality for the church. The synod is like a family, the cardinal explained: mom says be careful, dad says be not afraid. Schonborn is the current editor of the Catechism. He predicted that John Paul II's version wouldn't last as long as the one that followed the Council of Trent. He also stated the obvious about John Paul's Theology of the Body: it constitutes a development of doctrine. The cardinal endorsed the law of gradualism, saying, "There is an ideal we want to reach. But we do it with patience, over time." And he favored looking for the positive elements even in "disordered" relationships. The church looks first at the person, not at the person's sexual orienation, he said. That's basic Christian doctrine. The church shouldn't look first to the bedrooms of its people, Schonborn continued, but to their living rooms. He spoke of gay couples he knows, praising one partner who cared for another who was seriously ill. "It was exemplary," he said. "Full stop." ***

Finally, and perhaps most important, Schonborn praised this as the first "authentic synod" he has ever attended--and he's been highly critical of previous ones. This time it's different. This synod was convened by the pope of process.

** I added this sentence after I first published this post.
*** I've corrected this quotation to reflect the fact that Shoenborn said "exemplary," not "saintly."
Tags
Synod on the Family