No, Cardinal Kasper is not a racist. (UPDATED) 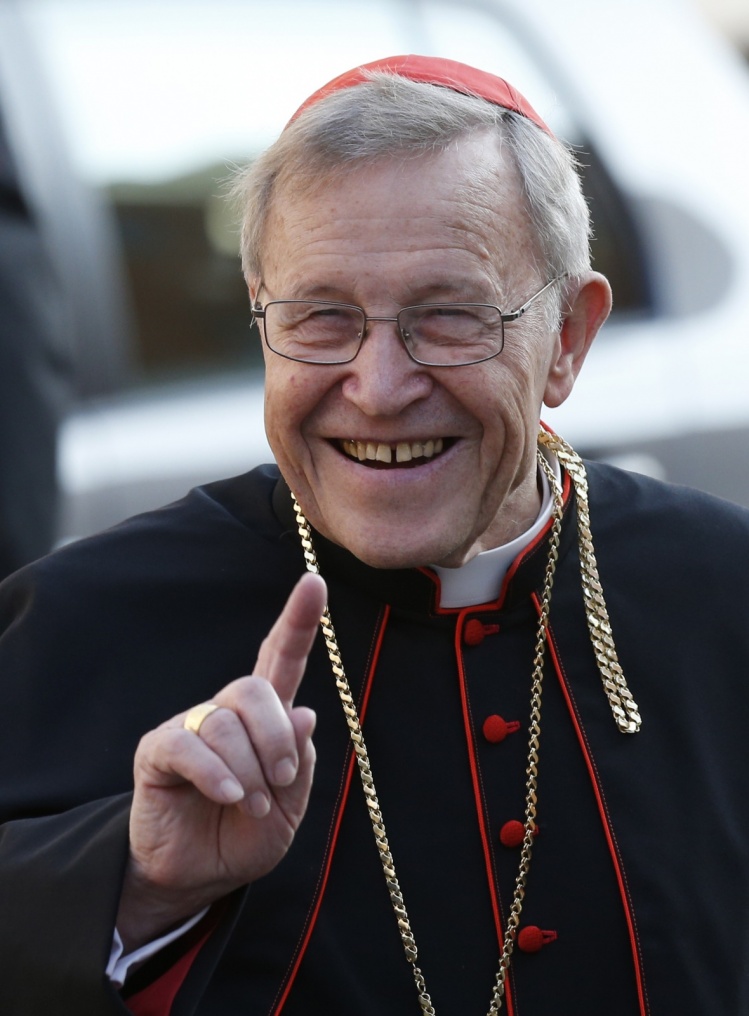 (Cardinal Kasper now denies that anyone from Zenit asked for an interview, and that he "never spoke this way about Africans." Zenit has pulled the interview. And the interviewer has published his response, complete with a full transcript and audio. Scroll to the end of this post for more.)

Yesterday, Edward Pentin, who sometimes identifies himself as a representative of the National Catholic Register, sometimes the Catholic Herald, published a brief interview with Cardinal Walter Kasper. Apparently Pentin got hold of Kasper as the cardinal was leaving the synod hall, and asked the obvious questions about his proposal to allow some divorced and remarried Catholics to receive Communion. Kasper said he believes support for that position is growing among the synod fathers.

Then Pentin--who claims he has seen "evidence of an engineered synod"--asked about the five people Pope Francis asked to help write the interim report on the discussions, and whether the pontiff was "trying to push things through according to his wishes." Kasper denied that the pope was manipulating the process, and then he elaborated on the difficulty of writing a summary document that accounts for the many cultures represented at the synod:

But are African participants listened to in this regard?

No, the majority of them [who hold these views won’t speak about them].

They’re not listened to?

In Africa of course [their views are listened to], where it’s a taboo.

What has changed for you, regarding the methodology of this synod?

I think in the end there must be a general line in the Church, general criteria, but then the questions of Africa we cannot solve. There must be space also for the local bishops’ conferences to solve their problems but I’d say with Africa it’s impossible [for us to solve]. But they should not tell us too much what we have to do.

Those comments, even though they do little more than state the obvious truth that a one-size-fits-all pastoral approach doesn't work in a global church, have occasioned much flouncery.

According to one critic, his remarks indicate a "stunning" insensitivity toward the African church. Others claim his remarks prove that he is "xenophobic" and "discriminatory." Maybe he should take a vow of silence, another suggested. "Master Kasper likes only one kind of African:
muzzled, submissive, and silent, and who knows his own place," a fringy traditionalist blog declared. One person went further.

Heil Kasper?: Irony lost on German Cardinal when he speaks like Euro prelates are the African bishops' masters http://t.co/NfEB1B8qQC

(Tenure can be so freeing, don't you think?)

Of course, there is nothing condescending, or xenophobic, or discriminatory, or--and let's just use the word that the most strident critics want us to think of--racist about Kasper's remarks. Look at what he said: Africa is not like the West when it comes to homosexuality. Neither are Islamic and Asian countries. In some places it's a taboo subject. Is that news?

Yes, he said "you can't speak about this with Africans and people from Muslim countries." But he didn't mean that it's a waste of time, or they're impossible. When I interviewed Kasper, with my colleague Matthew Boudway, it became clear that he had a kind of verbal tic when he was trying to describe a difficult situation: "It is not possible." That didn't surprise us because he's not a native English speaker. In fact, before we got started, the cardinal apologized because "my English is not so good." Indeed, his fluency made editing the interview a bit challenging.

But what about Pentin's follow-up questions?

"Are African participants listened to in this regard?" Kasper: "No, the majority of them [who hold these views won’t speak about them]." We have no idea where Pentin interviewed Kasper. Was it noisy? Is that why brackets appear? perhaps Pentin's paraphrasing is accurate. Kasper's view may be that African bishops just haven't said much on the subject of homosexuality. You can't listen to someone who isn't talking.

But Pentin wants more. So he presses, "They're not listened to?" And Kasper says, "Yes, in Africa, of course"--then Pentin fills in--"where it's a taboo." Again, are we supposed to be shocked to see a Western European cardinal explaining that in Africa homosexuality is a taboo subject? This is common knowledge.

But when Kasper says "in Africa," he is signaling his approach to the question. Have another look at the final passage we're supposed to find offensive.

I think in the end there must be a general line in the Church, general criteria, but then the questions of Africa we cannot solve. There must be space also for the local bishops conferences to solve their problems but I’d say with Africa it’s impossible [for us to solve]. But they should not tell us too much what we have to do.

The context of this response is the question of how a local church addresses its own pastoral challenges. (This is, after all, an issue to which he's given some attention.) "The questions of Africa we cannot solve." He means the German church. (Or perhaps the Western European church.) That's why, he continues, "there must be space also for the local bishops conferences to solve their problems but I’d say with Africa it’s impossible [for us to solve]." The "us" Pentin supplies, but again Kasper is saying that one local church cannot solve the problems of another. He doesn't mean we the synod, or we the rest of the church. He means we the Germans, we the Europeans, we the West. In other words, it's up to the churches of Africa to handle their own pastoral challenges. Just as "they should not tell us too much what we have to do." That's hardly dismissive, or xenophobic, or worse. It's just good theological sense.

Update: Today Cardinal Kasper reportedly said, “I am appalled. I have never spoken this way about Africans and I never would. I assure you that in these days and weeks...nobody from Zenit has introduced themselves to me and no one has asked for an interview. Nobody from Zenit has had an interview from me.” (Thanks to Austen Ivereigh for the rough translation.) Zenit has removed the piece from its website.

This may raise more questions than it answers. First, when Kasper says that he hasn't spoken "this way about Africans," does he mean that he literally did not say the words attributed to him buy Edward Pentin? Or does he mean that he did not mean to suggest, as some alleged, that he was dismissive of the concerns of the African church?

My hunch: Kasper is reacting to the critics who have alleged he couldn't give a fig about the experience of the African church--especially those who suggested his comments were basically racist. It was never Kasper's intention to dismiss his brother bishops' concerns. He was making a point about subsidiarity--that is, at what level should pastoral questions be addressed? Who is best equipped to deal with the pastoral problems of a local church? For Africa, Africans. For Europe, Europeans.

So do I think Pentin made the whole thing up? No. The responses sound too much like Kasper. So why did Kasper say no one from Zenit ever asked for an interview? Maybe Pentin neglected to mention where the interview would run. Or maybe the venue was so loud that Kasper couldn't hear Pentin identify the organization he was representing at the time. After all, Pentin is writing from Rome for a bunch of outlets: the National Catholic Register, the Catholic Herald, and Zenit (there may be others). Perhaps he doesn't decide what to do with his material until after the fact.

I suppose we'll have to wait for Pentin to clarify. For now, he's staying mum.

Update 2 (Thursday, 2:15 p.m.): Pentin has published a statement on his website responding to Kasper's latest comments, in which he more or less confirms my speculation. (Pentin also posted his recording of the interview. It's about as noisy as I expected.) He identified himself to Kasper as a representative of the National Catholic Register, not Zenit. That's why Kasper said no one from Zenit asked him for an interview. The cardinal did not deny that he gave the interview at all. He didn't dfeny saying the words Zenit published, as Pentin now suggests. Kasper just said no one from Zenit interviewed him. That's what happens when you don't properly identify the publication you represent.

Update 3 (Thursday, 4:30 p.m.): Thanks to Claire in the comboxes for pointing out this 2010 interview with Cardinal Peter Turkson of Ghana, who stated the following obvious truth about homosexuality in Africa:

Of course, as cultures are changing, this view will be challenged. But in a traditional African society, people wouldn’t even tolerate or listen to talk about homosexuality.

As the world is becoming increasingly global and the news from around the world is reaching every corner, traditional families are going to find out that what they consider to be taboo is not considered so elsewhere.

Does he have to apologize too?

Update 4 (Friday, 12:15 p.m.): Today Cardinal Kasper claims not that he did not say what Pentin said he said, but that he did not realize he was giving an on-the-record interview. (Apparently my speculation that recording devices were obviously displayed was mistaken.)

I will not comment on and much less authorize a secretly recorded, private conversation, which was not an interview, with two other journalists and a third whom I do not know at all and who also never personally introduced himself to me.

On Pentin's audio recording, you can hear him introduce himself and his publication as, "Edward Pentin, Register." It sounds as though he does so while Kasper is already speaking to the other people with whom he's talking. So what's the confusion? Perhaps Kasper didn't hear Pentin (the conversation took place on a noisy street) identify himself as a reporter. Maybe the conversation Kasper was having before Pentin joined was on background. (Strange that the accounts of the other reporters, or whatever they are, have not yet surfaced.) Whatever the case, Kasper said what he said--and nothing he said was racist.

McGuire: what was known and when?