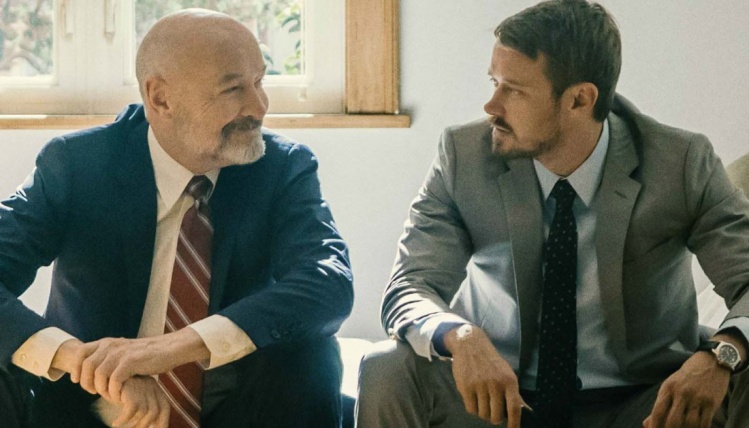 Video streaming services are both a drug and a drag: addictive in the first few weeks of a new subscription as you eagerly consume all the good stuff, and burdensome when the good stuff runs out, leaving you with the gnawing sense that you ought to watch something, anything, to justify the fees. Admittedly, not all Netflix or Amazon Prime Video subscribers feel this way, just those with a compulsion to always get their money’s worth—like me.

I had gorged on the Amazon original series Sneaky Pete (with Giovanni Ribisi in the title role), Goliath (Billy Bob Thornton at his best), and Bosch (featuring the always reliable Titus Welliver as the eponymous LA detective in the Michael Connelly novels). But when I looked around at the other offerings in the all-you-can-eat video buffet, I couldn’t find anything particularly appetizing, until I stumbled onto Patriot.

At first, this ten-part Amazon original feature looked to be just another spy series: “To prevent Iran from going nuclear, intelligence officer John Tavner must forgo all safety nets and assume a perilous ‘non-official cover’ [NOC in spy-talk]—that of mid-level employee at a Midwestern industrial piping firm.”

But to my surprise—and ultimate discomfiture—Patriot turned out to be the most unconventional, quirkiest espionage story I’ve ever encountered. It has the trappings of a spy thriller, but the script wanders off into serio-comic subplots dealing with family ties, corporate culture, institutional sexism, and, for good measure, PTSD and traumatic brain injury. More often than not the subplots muddy the narrative, yet they feature some of the most poignant moments and intelligent dialog in the series.

We first encounter protagonist John Tavner (Michael Dorman) in Amsterdam in 2012. Suffering from PTSD after a recent assignment gone horribly wrong, he spends his days smoking pot, careening through the streets on his bicycle, and publicly performing songs about his top-secret exploits and the state of his soul. He’s called back to the States by his handler (and father), Tom Tavner (Terry O’Quinn of Lost fame). A director of State Department intelligence, Tom has sold his superiors on a plan to influence the upcoming Iranian election, which pits a nuclear weapons hardliner against a more moderate candidate. The plan involves spreading $11 million around Iran in support of the favored candidate. All John has to do is take a suit bag full of cash from Point A to Point B and hand it over to an Iranian contact.

But first, he needs a cover that will allow him to travel to Point B, Luxembourg. Tom arranges an interview for his son at a Milwaukee industrial piping company, whose business is also moving things from Point A to Point B. He’s utterly unqualified for the job, as a grilling by the firm’s supercilious group VP (Kurtwood Smith) painfully demonstrates. Undeterred, John gets the job by shoving a rival candidate in front of a speeding truck.

The trip to Luxembourg sets in motion a series of events that includes the theft of the money by an airport baggage checker; a Keystone Kops effort to retrieve the cash; a betrayal by Tom’s Iranian contact; two murders; and a two-continent investigation of those murders by Luxembourg City Detective Agathe Albans (Aliette Opheim), who heads up an all-female unit that her male colleagues derisively refer to as “the department of skirts and stockings.” Tom dispatches his other son, Edward, a U.S. Congressman (played with bemused detachment by Michael Chernus) to help stabilize the situation, which, despite his best efforts, continues to spiral perilously—and hilariously—out of control.

Despite the meandering story line, the improbable occurrences, and the whimsical, often slapstick treatment of deadly serious subjects, I found the series riveting. The characters are well drawn and well played by a superb cast. The dialog is always smart, even when the scenes are silly. The location filming, especially in Prague (which serves as a stand-in for Luxembourg) is beautiful.

And, it’s a series that’s so outré, it tempts you to periodically revisit it—which is a great for those of us who like to get our money’s worth.