How Not to Be Overwhelmed by Requests for Donations
By Cathleen Kaveny
Domestic Affairs
U.S. Catholicism
Economy
Columnists
Ethics 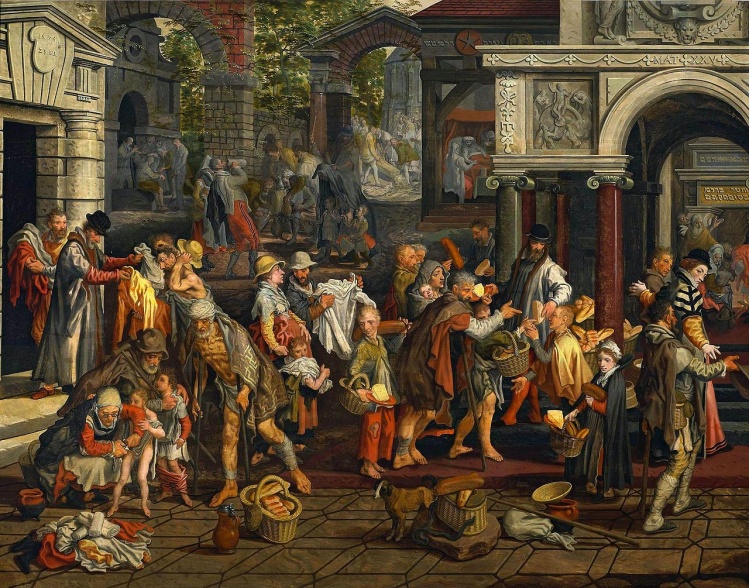 As I confronted the barrage of charitable solicitations assaulting my mailbox this past December, a grumbling question repeatedly crossed my mind: Who do they think I am, Melinda Gates? The pleas overwhelmed both the Christmas cards and the bills. Save the children, save the puppies, save the whales. Support public television, combat racism, and eradicate cancer. The Syrian refugees desperately require help—but so do the hurricane victims in Puerto Rico. And while you’re at it, your college marching band need new uniforms and your law school needs, well, nothing really—but give anyway. And last but not least, don’t forget Commonweal. The testimonies of need and pleas for succor left me feeling simultaneously depressed, resentful, guilty, and paralyzed.

How should people who don’t have Gates’s fortune, but do have more than a widow’s mite, think about allocating their charitable donations? Is it solely a matter of need? Should Christians direct all our charitable giving to the refugees and hurricane victims, while leaving the band and Commonweal out in the cold? What does it mean to give to charity, from a moral and religious perspective?

As New Year’s Eve approached, I continued to ponder these questions. I came to the conclusion that the big problem is the tax code itself. We need to resist its conceptual framework, which presses us to equate “charitable giving” with writing a tax-deductible check to a not-for-profit corporation organized in conformity with section 501(c)(3) of the code.

First, this equation is misleading. The framework encourages us to prioritize economic efficiency. But in some cases, it may be morally preferable to give $1000 in after-tax dollars directly to a needy family in your parish rather than make a $1500 donation to a registered charity. For many people, much of the time, the most urgent and generous type of charitable giving does not show up on their list of itemized deductions.

Second, the tax code’s framework distorts our understanding of the act of charitable giving. It is tempting for givers writing end-of-the-year checks to see themselves as nothing more than financial conduits moving money from one bank account (yours) to another (theirs). Viewed in this way, making a charitable contribution is impersonal and solitary—not all that different from paying bills.

But in the Christian tradition, acts of charity are meant to be the donor’s expression of solidarity with the recipient, and, more broadly, with the human family. It is a personal sign of gratitude for the material and spiritual blessings the donor has been given, which have enabled her to bless others in turn. An act of charity is meant to be a virtuous act, shaping and being shaped by the character of the person who makes it.

If we see making a charitable contribution as the giver’s uniquely personal act of solidarity, things start to fall into place. We can think of charitable giving as falling into three categories, which roughly correspond to the three theological virtues (faith, charity, and hope) and their related divisions of time (past, present, and future). Our donations can be balanced across these categories because our moral lives are balanced in the same way. This balancing act takes discernment.

We give faithfully to the institutions that had faith in our potential long ago, when we were younger and more vulnerable.
sharetweet

We give faithfully to the institutions that had faith in our potential long ago, when we were younger and more vulnerable. Such gifts acknowledge our debts of filial piety. In contrast, we can give to groups that are suffering here and now, near and far, as an expression of loving solidarity with the wounded. Misericordia literally means having a “miserable heart,” a heart that is moved to mercy because it suffers along with others. Finally, we give to groups and institutions that promise to build a more humane world in the future, whether by strengthening the culture, expanding prospects of mutual understanding, or advocating for peace and justice. Such gifts are a testimony of hope.

But how do we choose the particular charities within the three categories? In my view, a sense of solidarity, shaped by an almost aesthetic sense of fittingness, comes into play. It is fitting that a college graduate gives to her own alma mater, rather than to a higher-ranked aspirational peer school. If we can’t choose which particular group of suffering people to help, we can pick a (financially responsible) charity that operates in line with our deepest convictions (e.g., Catholic Relief Services) or special vocations or concerns (e.g., Doctors Without Borders). And it is fitting to prioritize cultural and advocacy groups that correspond with our own commitments, interests, and talents. These charitable contributions are an extension of our divinely given vocations—they express hope and confidence in others laboring in the same vineyard.

So, the answer to my own questions reflects the Catholic predilection for balance and inclusion. It is morally permissible, indeed it is fitting, to give to your alma mater (even if it is rich) and to Doctors Without Borders—and, of course, to Commonweal, in order to express confidence in the future of Catholic intellectual life.