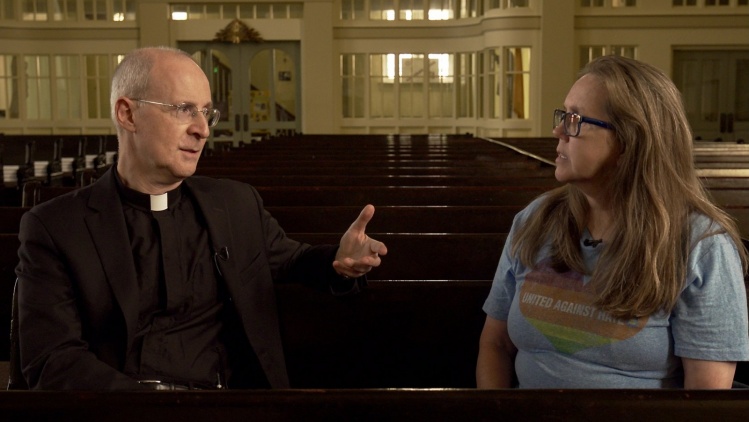 “I always wanted to be close to Jesus. That’s why I’m doing all this.” That’s how Fr. James Martin, SJ, the well-known Jesuit priest and bestselling author, explains the motivations for his increasingly prominent LGBT ministry. The work began in 2016, after the mass shooting at Pulse Nightclub in Orlando, during which 49 people were killed. In the days and weeks following the tragedy, Martin became incensed at the Church’s apparent indifference to gays, lesbians, and their parents. So he embarked on a project of healing and repair for Catholics who feel shut off from their Church. “It’s not a question of making them Catholic,” says Fr. Martin. “They already are.”

One of the earliest fruits of Martin’s efforts was his 2018 book Building a Bridge: How the Catholic Church and the LGBT Community Can Enter into a Relationship of Respect, Compassion, and Sensitivity. The book invited intense praise and fierce criticism among opposing factions of the Church’s culture wars, but Martin’s message of inclusivity and his call for respectful dialogue resonated broadly with ordinary American Catholics. The text has since been translated into many foreign languages. The new movie about Martin’s ministry, also called Building a Bridge, premiered at the Tribeca Film Festival late last year. (Directed by Evan Mascagni and Shannon Post and produced by Martin Scorsese, it’s now available to stream on AMC+.) The impact of the book and the film, together with Martin’s popularity, suggest that this could be a moment of truth for the Church, gently nudging it toward greater inclusion.

As the film opens, we see Martin watering plants on the rooftop of his Jesuit residence near Lincoln Center in Manhattan. He prunes and plants and sees how the flowers grow every morning—a visual metaphor of his Ignatian spirituality. The camera then follows his walk across town to the offices of America Media on Sixth Avenue in Midtown. People recognize him, stopping him to say “thank you,” or asking for a hug. This, in the city where supposedly no one knows your name. Martin smiles at everyone, and they smile back.

When he’s not writing in the office, Martin speaks at packed parishes and lecture halls across the country. He also visits families in their homes for dinner. He’s busy, but never rushed, and seemingly has time for everyone. When parents tell Martin that they stopped going to Mass after their children were rejected by the Church, his message is simple and unassuming: he assures them they are good parents, and that God loves both them and their children.

Martin also gives excellent spiritual advice. In one scene, an anguished mother whose son was murdered tells Martin she can no longer pray. He asks whether she has tried praying to Jesus’ mother—after all, Mary’s son had been executed, too. In another scene, an anxious college student tells Martin about her fear of coming out to her parents. “They talk badly about it,” she says. Nodding with understanding, Martin assures her, “Part of it is giving them time. I’m sure they love you, but they don’t know how. So, you may be farther ahead than they are on this. God loves you, you do know that.” As Martin offers her a hug, the girl weeps with relief. “It will be okay,” Martin says. “It will take some time, but it will be okay.”

What makes Martin’s witness so compelling is the fact that he always practices what he preaches.
sharetweet

One of the film’s strengths is the way it juxtaposes Martin’s ministry with that of Michael Voris, founder and President of St. Michael’s Media, otherwise known as Church Militant. Calling the pair a “study in contrasts” is an understatement. In addition to Martin, the filmmakers also had extensive access to Voris, and they subtly signal the difference between the two men by drawing attention to their living spaces. Except for his dog Rebel, a “Catholic who listens to Fox News,” Voris lives alone. A crusader’s cross hangs on his living room wall, while a statue of the Blessed Mother stands behind his swimming pool. Martin lives in a religious community. His small room contains little more than a bed, a desk, and a few shelves lined with books and devotionals.

Though extreme, Voris typifies the anti-LGBT vitriol that Martin frequently encounters. In interviews and public talks, Voris accuses Martin of being a “twisted pervert.” “There isn’t a doctrine or teaching of the Church Martin wouldn’t twist and pervert in his sick mind so as to excuse his acceptance of homosexual lust,” he seethes. Martin’s response to such baseless attacks is as humble as it is moving: “I do pray for Michael Voris, even though he probably doesn’t believe it. Most of all, I pray for his heart to be softened toward LGBT people. I also pray that his heart be softened toward himself. And that he finds some peace.”

What makes Martin’s witness so compelling is the fact that he always practices what he preaches: respect, compassion, and sensitivity for all people. “Where did you get that?” one doubter asks at a talk, in which Martin says that Catholics have a duty to love LGBT people, who are also loved by God. “From the Catechism,” Martin answers glibly. “What’s his dog in this fight?” Michael Voris muses to the filmmakers, implying that Martin is gay. “Jesus,” Martin answers. “Jesus is about love and inclusion. Would you ask someone that question who worked with refugees or gang members or people who are sick? You know, why are you a hospital chaplain? What’s your dog in this fight?”

If Martin often speaks with confidence, it’s because all of his talks are first vetted by his superiors. He clearly treasures his vows, and constantly reiterates the fact that he isn’t out to change Church teaching. Instead his aim is, well, to “build a bridge” between the hierarchy and the LGBT community. Perhaps that’s why Pope Francis named Martin a consultant to the Vatican’s Secretariat for Communications in 2017. He even sent Fr. Martin a handwritten letter of support: “Thinking about your pastoral work, I see that you are continually seeking to imitate the style of God.” Accordingly, the film concludes on a Vatican roof, with a beaming Martin expressing gratitude for his 2019 papal audience.

Building a Bridge doesn’t just have all the hallmarks of a well-made documentary—timely topic, compelling story, and superior filmmaking. It’s also subversive in its orthodoxy. A strong undercurrent throughout the film is that what LGBT Catholics really want is to live out the loving values the Church and their parents first modeled for them. They want what the rest of us want: to be loved, to be family. What’s so bad about that? And what is the Church going to do about it?

Fr. Martin and director Evan Mascagni also appeared on the Commonweal Podcast to discuss the documentary and its reception. You can listen to that interview here:

Michael Leach is publisher emeritus of Orbis Books, and author of many books, including Why Stay Catholic? Unexpected Answers to a Life-Changing Question, winner of a first-place award from the Catholic Press Association for “Best Popular Presentation of the Catholic Faith.”