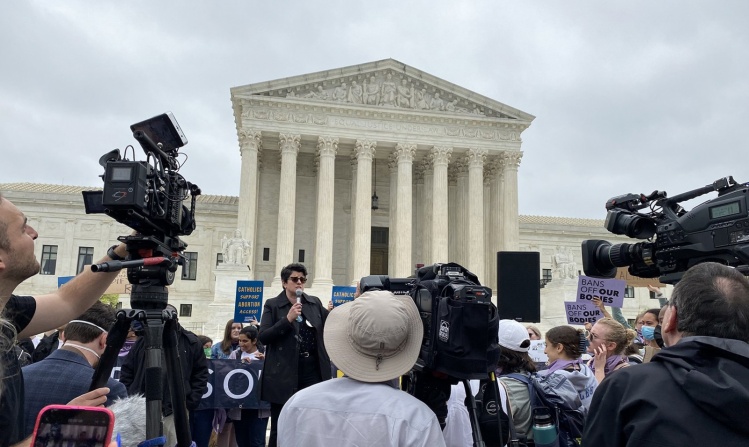 Jamie Manson of Catholics for Choice speaks outside the Supreme Court of the United States, May 3, 2022 (CNS photo/Rhina Guidos).

If the extreme reaction of both pro-choice and anti-abortion activists to the Supreme Court’s Dobbs decision was predictable, it has nevertheless been disheartening. Democrats in Congress have rushed to pass an abortion-access bill even more libertarian than Roe and Casey. In “blue” states like Connecticut, where I live, the Democrats running for reelection to the U. S. Senate and the governorship are touting their unqualified devotion to “women’s bodily autonomy” and “reproductive health care.” In “red” states, meanwhile, anti-abortion politicians have passed, or will soon pass, laws outlawing abortion from conception, with no exceptions for rape or incest. And some anti-abortion activists talk hopefully of a “fetal personhood” amendment to the U. S. Constitution. Both sides carefully avoid any suggestion that compromise is either possible or necessary on this most difficult and philosophically complicated issue.

With Roe (1973), the Supreme Court, seeking to protect doctors, preempted the debate over abortion that was then taking place in state legislatures across the country. Commonweal opposed the decision. Over the years the magazine has called for laws limiting access to abortion to the first few months of pregnancy, judging that an absolute ban on the procedure would be imprudent and unenforceable. Law has an important pedagogical function and should reflect the value the community places on fetal life, but because of the unique burdens of pregnancy, the battle against abortion can only be won in the moral and cultural arena. Laws that a majority of Americans disagree with will be resisted and circumvented. As the journalist David Frum and the historian Michael Kazin have both argued, completely outlawing abortion will create a situation similar to what occurred during Prohibition. Americans will disregard the law, and in the face of that disregard, restrictions will be enforced only half-heartedly. As a consequence, questions about the moral value of fetal life will be marginalized while the rule of law itself will be undermined.

On most political issues, I am generally of the mind that Republicans are more ruthless or cynical than Democrats. But pro-choice activists sometimes challenge that assumption. Take the group Catholics for Choice, which Commonweal has criticized in the past. “American Catholics opposed to current abortion practice have long felt unfairly undermined by the efforts of Catholics for a Free Choice,” the editors complained twenty-five years ago (“There goes everybody,” March 14, 1997). Catholics, the editors wrote, need not accept that organization’s “hardline pro-choice group as a fitting ally.”

How Catholic is this appeal to hector one’s bishop or Catholic members of the Supreme Court?
sharetweet

I’ve recently received several email solicitations from the president of Catholics for Choice, Jamie Manson. These emails assume that I am, as a Catholic, outraged at the Dobbs decision. Talk about chutzpah. Catholics for Choice, I am informed, has “called on President Biden to declare a public health emergency,” whatever that means. But “don’t get mad, get even,” Manson urges, quoting John F. Kennedy, “another Catholic president.” (Is JFK really the Catholic you want to turn to on issues like this?) What, you might wonder, would “getting even” mean in this context? Manson has an answer. “Make a gift to Catholics for Choice in honor of a Catholic leader who is making you angry, and we’ll be sure they hear about it.” Suggested targets follow: “Your local Catholic bishop; a bishop who is set on denying communion to pro-choice Catholic politicians (hello, Archbishop Cordileone!); antichoice Catholic Supreme Court Justices: John Roberts, Clarence Thomas, Samuel Alito, Brett Kavanaugh, or Amy Coney Barrett.” In conclusion, a web address is provided for anyone who “needs an abortion.”

How Catholic is this appeal to hector one’s bishop or Catholic members of the Supreme Court? How would a communication from Catholics for Choice to any of these public figures enable pro-choice Catholics to “get even”? What makes this exhortation especially galling is that there isn’t anything recognizably Catholic about this approach to politics or internal Church disagreements. It is driven by rancor, not by any good-faith effort to understand the views of Catholics you might disagree with—Catholics like me.

As it happens, I once attended a talk by Manson. She’s a dynamic speaker, with an autobiographical story that appeals to a certain kind of alienated Catholic. Much of the talk was devoted to a familiar feminist critique of the institutional Church. What struck me most forcefully was Manson’s rather startling declaration that she couldn’t be bothered with either Scripture or tradition. Her interest was in dismantling “the patriarchy,” full stop. My first reaction to this statement was that it was something only someone educated at Yale Divinity School (as I was) could think. But more seriously, how can one be a Catholic and ignore Scripture and tradition? Scripture and tradition, for example, tell us that Jesus, God incarnate, was born a male, and while the significance of that fact can and should be debated, it cannot be dismissed out of hand as a toxic and predictable expression of patriarchy, or as an insult to women. To claim to be a Catholic while ignoring Scripture and tradition is like asserting you can be a good American, faithful to the Constitution, and still think your own vice president can decide which presidential electors to certify and which to reject. You can’t get mad, or even, with people who think like this. You can only pray for them.