The status of animals 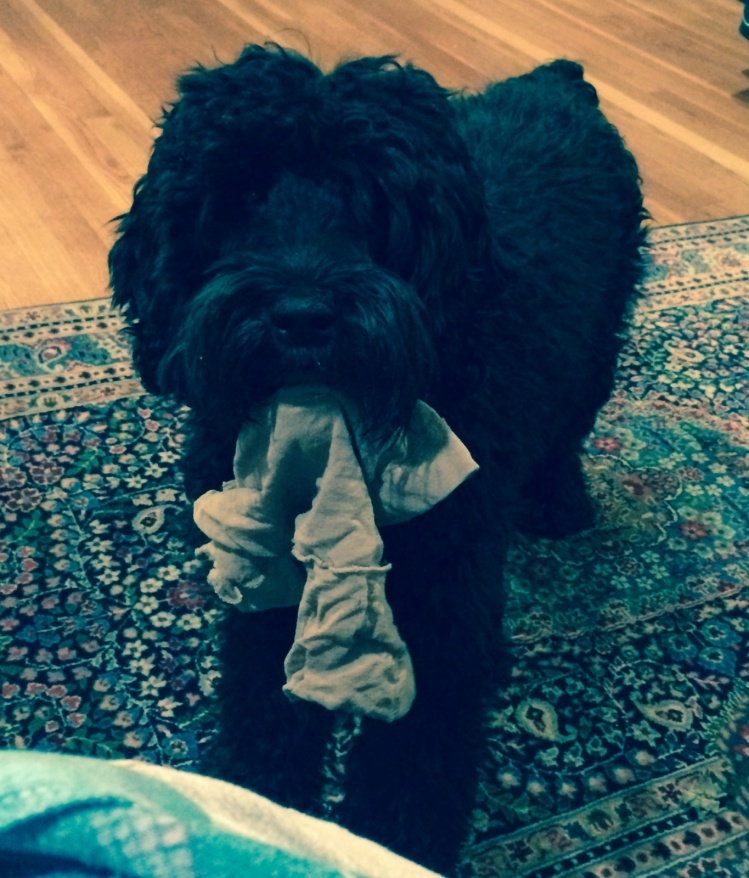 This is Molly Kaveny. She is a two-year-old labradoodle who lives in the house I grew up in, with my parents and sister—about an hour away from my house now.

Over the past several months, I have been increasingly convinced that Mollyis a person—a non-human person, but a person nonetheless. She has emotions. She has moods. She has reason, and will. She has goals—and she pursues them with astonishing success.

This picture offers an example. I had come home for a weekend visit. Wandering into the bedroom, Molly nuzzled into my partially zipped suitcase, and removed a pair of (clean) stockings. She then padded into the den, and over to me, rightly figuring that of the five or six people in the room, I would have the most interest in them. She is presenting me with a choice: Either I can chase her round and round the chair, as in a crazy cartoon sequence, or I can ransom the stockings immediately with a treat. Either way, from Molly's perspective, it is all good.

Molly is a member of the family, and like all of us, her judgment is deficient in some respects. One day, she was caught under the bed chewing a bottle of my mother's blood-pressure pills. We didn't think she had eaten the pills (she doesn't like things that don't taste good), but we couldn't take a chance. So she was taken to the Veterinary Intensive Care Unit in Walpole, Mass, where they pumped her stomach, and put an IV in her, and watched her overnight. $700 and twelve hours later, she was picked up cranky but in one piece by my relieved sister and father. He didn't balk at the bill, although he has been known to complain if Dunkin Donuts raises coffee prices. The major long-term effect: All pill bottles are Molly-proofed. And Molly doesn't like car rides too much now. We were all worried that she thought we were being gratuitously mean to her. We felt badly about the need to make her uncomfortable, as we would if we were giving a toddler a shot.

A $700 vet bill. All the starving children in the world. As an ethicist, I'm of course aware of these criticisms about how we Americans treat our pets. At the same time, I think the whole question of the status of animals—and the status of pets—is ripe for critical reexamination. We do have relationships with animals, and they with us—and those relationships carry obligations of fidelity and care. If the recent meeting of the Society of Christan Ethics is any indication, the status of animals may be one of the most important emerging questions in the field of Christian morality.

What do you all think about ethics and pets?

Rules Are Not Enough