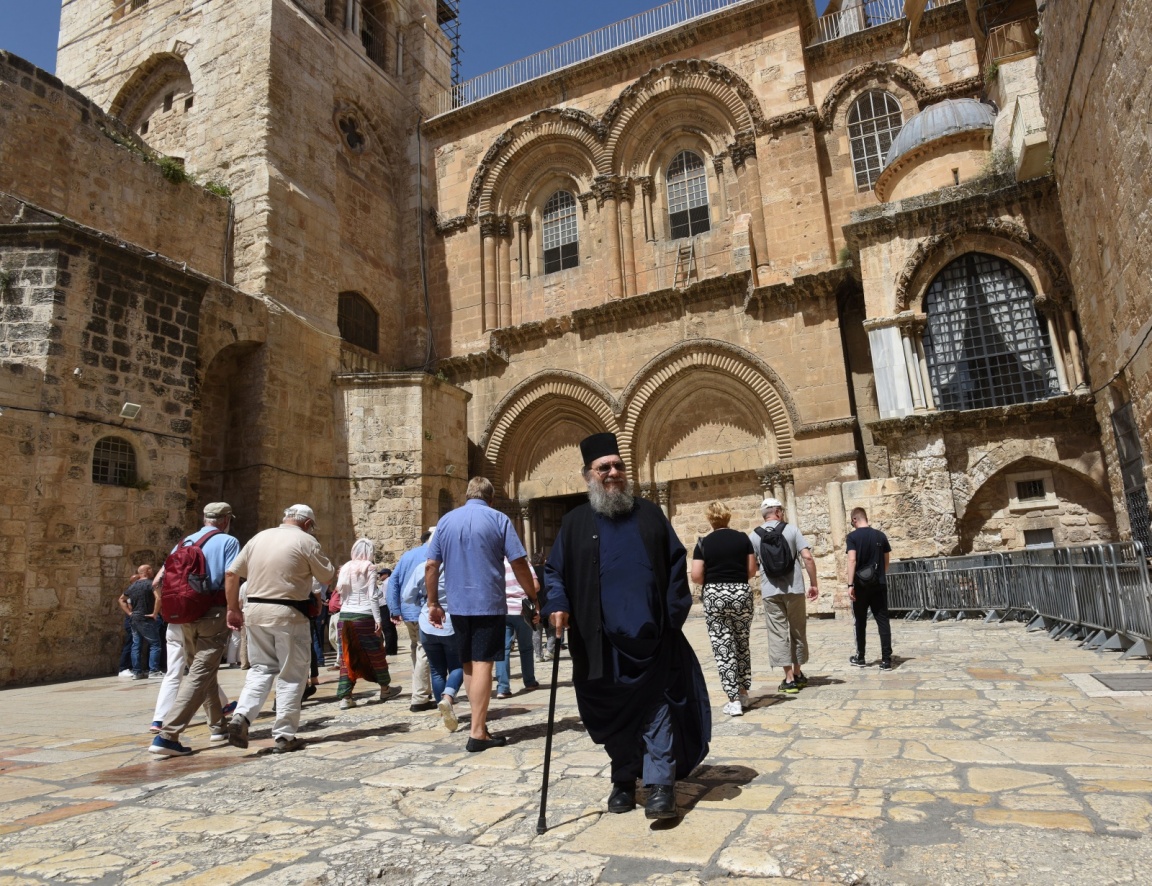 A priest walks in the courtyard of the Church of the Holy Sepulcher March 28 during Holy Week in Jerusalem's Old City. (CNS photo/Debbie Hill)

The State of Israel plays a complicated role in the relations between the Catholic Church and Judaism, between the church and the United States, and between different elements within the church itself.

For the celebration of the seventieth anniversary of the State of Israel, some top advisors to President Trump, members of his cabinet, and U.S. senators and members of Congress are attending the opening of the new American Embassy in Jerusalem later this month. Pope Francis expressed grave concern about the decision to move the U.S. Embassy to Jerusalem when it was announced in December.

The Vatican’s concern over the status of Jerusalem is only one aspect of the growing tension between the Christian churches and the State of Israel over the past six months. In February, Christians in the Holy Land protested against a new Israeli tax policy and a proposed land-expropriation law. The Church of Holy Sepulcre was shut down for three days before Prime Minister Benjamin Netanyahu finally backed down.

Rome looks at the anniversary of the State of Israel with a complex perspective very different from that of Evangelical Protestants in the United States. In less than fifty years, the Vatican has moved from opposing the Zionist movement, to a de facto recognition of the State of Israel, to a de iure recognition. In 1947, the Vatican supported UN Resolution 181, which called for the “internationalization” of Jerusalem. In the encyclicals In multiplicibus curis (1948) and Redemptoris nostra (1949), Pius XII expressed his wish that the holy places have “an international character” and appealed for justice for the Palestinian refugees. In its May 15, 1948 issue, the official newspaper of the Holy See, L’Osservatore Romano, wrote that “modern Zionism is not the true heir to the Israel of the Bible, but a secular state…. Therefore the Holy Land and its sacred places belong to Christianity, which is the true Israel.” The description of Christianity as the “true Israel” (verus Israel) is a reminder that it wasn’t until decades after the Shoah that the church fully recognized the connections between supersessionism, theological anti-Judaism, and anti-Semitism.

Vatican II helped reconcile Catholicism and Judaism. But the relationship between the Vatican and the State of Israel remained complicated. During his trip to the Holy Land in Jordan and Israel in January 1964, Paul VI was very careful never to utter the word “Israel,” thus avoiding even the suggestion of recognition. The questions of who should control the Holy Land and whether to recognize the State of Israel were not addressed by Vatican II’s Nostra aetate, whose drafting was closely scrutinized not only by bishops, theologians, and the Vatican Secretariat of State, but also by diplomats, spies, and Arab and Jewish observers. Vatican II ended before the Six Day War of 1967 and the subsequent occupation of Palestinian territories, which permanently changed the geo-political situation in the Middle East. From then on, Israel was in firm possession of the whole of the Holy Land west of the Jordan River, including all the Christian holy places. This led the Vatican to modify its position in a pragmatic way. In an address to cardinals in December 1967, Paul VI called for a “special statute, internationally guaranteed” for Jerusalem and the Holy Places (rather than internationalization). We cannot know what Vatican II would have said if the occupation of the Palestinian territories and the capture of Jordanian-controlled East Jerusalem (and the Old City) had taken place before or during the council. But we do know that Arab states and Arab Catholic bishops and patriarchs at Vatican II were strongly opposed to anything that sounded like a recognition of the State of Israel.

The church has yet to develop a real theology of the Holy Land.
sharetweet

On the one side, the church is alert to the ambiguities of an Israeli “civil religion” for which ethnic belonging trumps religious belonging. Who counts as Jewish in Israel is not quite the same as who counts as Jewish in the rest of the world. African-American and Latin-American converts to Judaism, for example, have sometimes been rejected for citizenship because their Judaism is not deemed authentic. The distressing situation of Ethiopian Jews in Israel is another example.

Some argue that the flourishing of fundamentalist groups in Israeli Judaism is essentially a secular phenomenon that has more to do with a nation-building project than with a religious commitment to the Word of God and the observance of God’s precepts. Nationalist zeal has tried to turn Israeli Judaism into an ideology. Having the wrong politics can lead to having one’s identity questioned. When the actress Natalie Portman recently chose not to accept a million-dollar prize because she did not want to be seen as supporting Prime Minister Benjamin Netanyahu, who was scheduled to speak at the prize ceremony, a member of the Knesset proposed that the State of Israel rescind Portman’s Israeli citizenship—this despite the fact that she was born in Jerusalem and her maternal great-grandfathers died at Auschwitz.

The Catholic Church may not have formulated a theology regarding the role of Israel as a Jewish State in God’s plan, but it does have a vision of the nation state and of the relations between ethno-nationalism, secularism, and confessionalism. Generally speaking, the Vatican position is critical of ethno-nationalism (and of “majoritarianism”), of secularism (because of the limits it imposes on religious liberty), and of confessionalism (when it creates different levels of citizenship based on religious affiliation, since the church favors religious liberty and full civil rights for member of all religions). This is all part of the tension between the Vatican of Pope Francis and the Israel of Benjamin Netanyahu.

There are in fact many such views all vying for position within the church.
sharetweet

But it is misleading to talk as if there were only one Catholic view of the nation state—or of the relations between nationalism, secularism, and confessionalism. There are in fact many such views all vying for position within the church. We know how Pope Francis, his predecessors, and Vatican diplomacy see the relationship between religion and politics, but their views are hardly representative of how Catholics around the world see it. Enter the United States of America. The alliance between right-wing politics and religious fundamentalism in this country has an effect on how Christians, including some Catholics, look at the State of Israel. In American Evangelical Christianity, there is a theology of the State of Israel—let’s call it Christian Zionism—that is very different from the Catholic Church’s position. But there is no guarantee that Christian Zionism will not become as influential among American Catholics as it is among American Evangelicals. You can already find it in some conservative Catholic groups.

There is a chasm between the values of the universal church and the sectarianism we see emerging in different ways all over the world. Sadly, Christians are not immune. See, for example, the April 14 statement of the Greek Orthodox, Syrian, and Melkite (Catholic) patriarchs of Antioch defending the regime of Bashar al-Assad in Syria after its latest chemical attack on civilians. Meanwhile, some Catholic groups from other parts of the world have established “missions” in Israel in the past few years, and there is a worrying convergence between some of these groups and the messianism of the Lubavitchers. The void left more than fifty years ago by Vatican II is gradually being filled by Christians who have their own reasons for giving the State of Israel their unconditional support. This is just one example of the complicated nature of Catholic globalization in an age of nationalism and sectarianism.