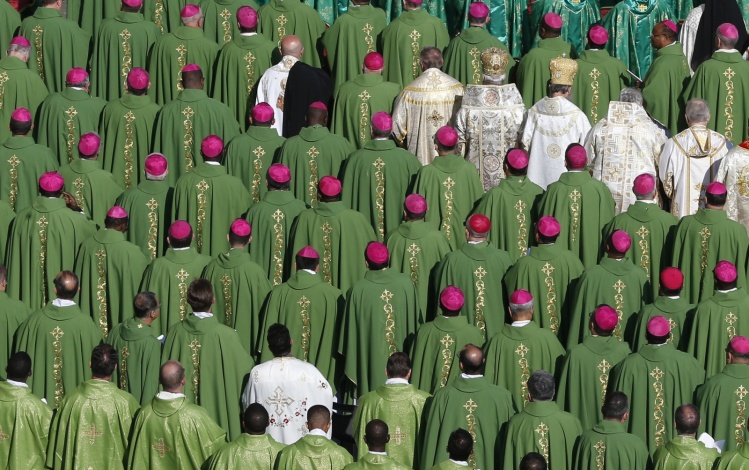 As Commonweal readers know, Douthat frequently writes about Catholicism and is an outspoken critic of Pope Francis. His most recent book, To Change the Church: Pope Francis and the Future of Catholicism, paints a rather dreary picture of a radical reforming pope eager to punish his critics and out of his depth theologically. Douthat’s discussion with Perlstein, however, addressed not the church’s crisis but this country’s political tumult. Although a staunch conservative and ardently anti-abortion, Douthat is no fan of President Trump. In extemporaneous opening remarks, he described politics in the United States and Europe as “paralyzed,” caught in a stalemate that is unlikely to resolve itself anytime soon. Trump’s “zombie Reaganism” and Britain’s Brexit catastrophe show that “no one can govern.” In the United States, this has been the case since at least the Clinton administration.

Douthat attributed this political paralysis to the stranglehold that meritocracy and global elites have over the economy and the political system. The result of this concentration of wealth and power at the top is middle-class insecurity and the immiseration of the working class. He was not sanguine about the chances for dramatic political change. The “establishment” ensures that opposition to its meritocratic rule is futile by co-opting the best of the underclass. The result is the rise of an inchoate populism that elites have little problem ignoring. Trump’s legislative successes, after all, have been little more than the implementation of traditional Republican policies: cutting taxes on corporations and the wealthy, gutting regulation, and increasing defense spending. His “populist” promises have gone unfulfilled. Stasis and stagnation will continue, Douthat said, until a politician or a movement arises that has the capacity to channel populist anger into real reform. The Democrats are too elitist to pull that off.

Perlstein, a contributing writer at the Nation, is the author of Nixonland: The Rise of a President and the Fracturing of America and Before the Storm: Barry Goldwater and the Unmaking of the American Consensus. “I don’t believe in a moment of stalemate,” Perlstein began his response to Douthat. He went on to lay out the ways in which centrist Democrats, such as Jimmy Carter and Bill Clinton, betrayed Roosevelt’s New Deal consensus, adopting Republican demands to “shoot Santa Claus” by shrinking the federal government. Clinton, after all, announced that “the era of big government is over.” In the Democrats’ return to power in the House, Perlstein sees the possibility of a robust expansion of the federal government’s role in ensuring economic and social justice.

I doubt Perlstein is right on that score. As Douthat pointed out, American society is too old and relatively too well-off to embark on a dramatic political realignment, let alone a massive redistribution of wealth. But Perlstein was right in noting that the Republicans have essentially played a bait-and-switch game, never seriously attempting to reduce the size of government, let alone the national debt. Instead, they have redirected government largess to the extremely well-off, while cynically demonizing Democrats as illegitimate “governing partners.” Dug in across the South and rural states, Republicans have anti-majoritarian advantages in the Senate and the Electoral College, and are likely to control the Supreme Court for the foreseeable future. It is going to take some very hard and very imaginative political work to undo what Republicans have put in place over the past forty years.

Polarization in the church, especially the American church, seems to promise the same kind of paralysis that afflicts U.S. politics.
sharetweet

Something similar could be said about the modern papacy’s unprecedented control over the church—or at least O’Malley suggested as much in his discussion of the sexual-abuse crisis and the part played by the rise of modern clericalism in that calamity. Clericalism, a narrow devotion to the institutional aspect of Catholicism, made the sexual-abuse disaster possible, he argued. The American church “has a more acute sense of the crisis” than the rest of the church, in part because of political polarization in the United States, a polarization reflected in the “scandalous” anti-Francis sentiment among conservative American bishops.

O’Malley then laid out a somewhat counterintuitive argument about the relationship between church and state. Historically, it was only in the late nineteenth century that popes gained exclusive control over the appointment of bishops. Before that, monarchs and states often exercised veto power over episcopal appointments, thus allowing lay concerns a voice in church governance. As a consequence, modern popes have elevated bishops who narrowly reflect their own views and disposition, not the concerns of local churches and cultures. The exclusion of lay people from the process helps to explain the episcopal malfeasance that has been exposed by the sexual-abuse crisis.

O’Malley was not advocating a return to state participation in the appointment of bishops. Instead, he hopes that a role for the laity will develop out of the local synods Pope Francis has urged ordinaries to convene. The prospect of simply electing bishops, or having influential Catholics vet them independently, as some are now suggesting, would be a sure path to chaos. Rather, it is O’Malley’s hope that lay voices, including women’s voices, will emerge from the synods to hold bishops accountable.

How likely is this to happen? Polarization in the church, especially the American church, seems to promise the same kind of paralysis that afflicts U.S. politics. Much, of course, depends on how long Francis’s papacy lasts and how successful he is in appointing bishops willing to listen to the laity. The “scandalous” opposition to Francis in the U.S. hierarchy and among conservative Catholic groups is entrenched. They deeply resent his call for the church not to obsess over issues such as abortion, birth control, and same-sex marriage. In 2015 I attended an international conference of Catholic academics, pundits, and clergy shortly after Francis’s visit to Philadelphia. I was seated in the back of a large lecture hall, and standing behind me was a prominent American hierarch. He was talking animatedly, and it was impossible for me not to overhear the intemperate way in which he was denouncing Francis. I have often been surprised by the vehemence and hypocrisy of some conservative Catholics, who have long condemned so-called liberal “dissent,” but who now take every opportunity to criticize this pope and question his teachings. I don’t question their right to criticize, but admit I was shocked to overhear a bishop talking about the pope the way Trump talked about Obama’s birth certificate. His bald-faced impiety toward the office of the papacy made a mockery of his own claims to authority as a bishop. What is especially depressing about stalemate, both political and ecclesial, is the sour taste it leaves in everyone’s mouth.