The Specter of Marcion 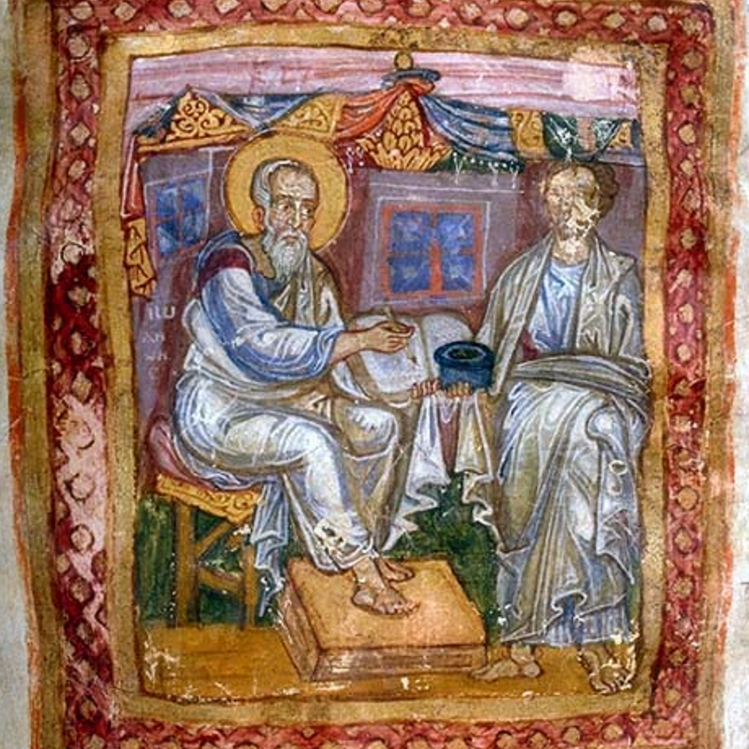 The Apostle John and Marcion of Sinope from The Enigma of the Fourth Apostle at the J. Pierpoint Morgan Library (Historic Images / Alamy Stock Photo)

Last summer a prominent Evangelical minister preached a sermon about Christians’ relationship to the first three-quarters of their Bible. Following the example of the apostles, believers today ought to “unhitch” their faith from “the Jewish scriptures,” indeed from its “worldview, value system, and regulations.” When looking for divine instruction, for teaching about how to live as a follower of Christ in the world, best to skip over the law and the prophets. The Old Testament shouldn’t be the church’s “go-to source” for hearing a word from the Lord.

Only a few months before that, a book review in First Things relitigating the details of the Mortara case—in which Pope Pius IX removed a child from a Jewish home because, years earlier, a housemaid had secretly baptized the child—ended up siding with Pius. Because of baptism’s indelible sacramental character, the church, and therefore the vicar of Christ, had a claim to the young boy—or rather, the pope, owing the child a Christian upbringing, had no choice but to remove him from his Jewish household in order to provide him with a proper education.

Whether to rid the Gospel of unnecessary baggage or to assert the authority of the church, the temptation to anti-Judaism comes in different forms, for different reasons, across the ideological spectrum. In all cases, it is a temptation to be resisted. In fact, it is the oldest and most virulent temptation in the church’s history. Blessed are the heretics, the theologian Stanley Hauerwas has said, for their errors help clarify the truth. If heretics are blessed, Marcion of Sinope (85–160 A.D.) is their patron saint, giving his name to that most reliable of gentile sins: distaste for the ways and works of the God of the Jews—a distaste more of the gut than of the mind, a reflexive revulsion that invariably encompasses both the God of the Jews and the people whose God he is. For they are bound together.

On this, all can agree. God and the Jews are a package deal. As 1 John 2:23 says of God and Christ—that one cannot have the Father without the Son, or the Son without the Father—so here: you cannot have Abraham’s God without Abraham’s children. Reject the latter and you lose the former. In its rejection of Marcionism, the church staked a claim to this principle: the only God with whom it would have to do was the Jewish God, the God of Moses, Hannah, Mary, and Jesus. But the church’s consistency in maintaining this principle was uneven at best. The specter of Marcion continued to haunt Europe. It even casts its long shadow over the Shoah. It is no accident that history’s greatest crime against the Jews came in the heart of Christendom. No longer did Israel’s menace wear the face of a Pharaoh or a Haman. Now it was the brothers of Jesus according to the Spirit who terrorized, or turned away, the brothers of Jesus according to the flesh.

The fundamental question—always implicit but bitterly explicit since the Shoah—is whether Catholic Christianity can avoid supersessionism.
sharetweet

Was Christianity as such complicit in this sordid history, or only individual Christians? Instead of relitigating that question, let me pose a different one: Whose Christianity? After all, Protestants and Catholics have tended to harbor different kinds of antagonism toward Jews. Protestantism thrives on its own supersessionistic narrative, according to which the faithful reformers of the sixteenth century are analogous to the apostles in the first, overcoming the legalistic conventions and authoritarianism embodied, respectively, in the Roman papacy and the Jewish Pharisees. In this narrative, Catholics are neo-Judaizers; stiff-necked Israelites are proto-Catholics. Like other revolutionary movements whose cooled revolutionary fervor generates sub-revolutions against itself, Protestantism’s seemingly infinite fragmentation in the last half-millennium can be understood as one faithful remnant after another superseding its Pharisaic-Papist forebears. The trouble is that once Rome was coded as Jewish, the Jews were guilty by association. Not for nothing were both Jews and Catholics considered intolerable in John Locke’s Letter Concerning Toleration. Such persons could not be trusted: their doubled identities (synagogue or commonwealth? pope or monarch?) precluded the unity of allegiance required for the liberal state’s monopoly on violence. Indeed, the stubborn particularity of the Jews was a stumbling block for the formal equality of the nascent nation-state. Prussia and England could no more comprehend God’s election of Abraham and his descendants than Babylon and Greece had.

Over the years, Protestantism’s leading lights increasingly defined Christianity over against the Jews. Though Paul preached a crucified Messiah and called it a scandal to Jews and a folly to Gentiles, it was not the crucifixion itself that tripped up the Enlightenment. It was whose Messiah Jesus was. What Kant and his heirs wanted, ultimately, was God without the Jews. They wanted a God unbound to one people among all others. A God who had not picked Abraham out of the crowd and promised divine presence and blessing to his lineage for all time. A universal God, a God of all lands and not the land, a God revealed in all traditions and not just this one. A God revealed in humans, yes, but not incarnate in this one alone, the Galilean.

Sometimes Israel’s history was judged acceptable, including its culmination in the Incarnation. The universalizing anxiety then found itself projected onto texts rather than bodies. No longer was it a problem that the one God is Israel’s God. It was instead Israel’s scriptures that scandalized. They were considered antiquated, parochial, fatally ritualistic, ethnocentric, nationalistic, theocratic, barbaric, patriarchal, genocidal. Or they were just considered outdated, irrelevant to modern society. The relegation of the Old Testament to the status of mere prelude to the New is one of the many forms this textual supersessionism took (and takes), often with the help of historical criticism. On this view, the relationship between the Old and New Testaments is about a move away from the particular toward the universal, a move from the Jews to all humanity, from the curse of the Law to the grace of the Gospel, from the tyranny of the clerics to the freedom of faith. That Jesus Christ was born a Jew becomes a historical accident, requiring historical context, which Moses provides; but true religion begins in earnest with the first Evangelist.

So much for the Protestant brand of supersessionism. Catholicism’s longstanding problems with Jews do not stem from a disdain for particularity as such. On the contrary, it is a matter of rival particularisms. Just who is the one people of God? Which particular community has exclusive claim to the truth of the one and only God? Jewish theologian Michael Wyschogrod has written persuasively that Israel’s confession of God’s oneness has as much to do with the oneness of God’s people as with divine ontology. This helps to explain a case as painful as Edgardo Mortara. Whose claim trumps whose?

The fundamental question—always implicit but bitterly explicit since the Shoah—is whether Catholic Christianity can avoid supersessionism. Not the affirmation that Christ fulfills the Law, that the God of Israel has become incarnate in the crucified and risen one, that the church welcomes Gentiles into the people of God as it awaits the consummation of God’s reign: there is no reneging on such claims, for to do so would contradict Christian faith. No, by supersessionism I mean the claim that the church replaces Israel; or, more expansively, that Jews qua Jews are no longer in covenant with the God of Abraham; or, most provocatively, that Jews—either Orthodox or Messianic—ought not to keep Torah. Recent Catholic teaching, especially Nostra aetate and the Catechism produced under Pope St. John Paul II, suggest that such supersessionism can and should be avoided.

What the Mortara case shows, however, is that while Catholicism may lack the revolutionary-supersessionistic gene of Protestantism, its deepest historical challenge to the Jews is political. Usury laws entrapped Jewish merchants in a vicious Catch-22; havens of refuge become ostracizing ghettoes; sacramental reality authorizes intervention in a Jewish but not, say, a Lutheran family. At a time when the center is not holding and Catholics are again considering alternatives to liberalism, including a more integral relationship between church and state, the status of the Jews is once more in dispute. Rome appears to have resolved the theological issues, but the old Catholic supersessionism is visible just beneath the surface of the new integralism.

The need to confront it is urgent. The past, as we know, is not even past. That it took a calamity as profound as the Shoah to awaken Christendom in all its variety from its anti-Jewish slumbers is a testament to the length of the old heretic’s shadow. Marcionism is a demon that has yet to be exorcised. Indeed, rising levels of anti-Semitism in the West suggest a tragically short historical memory. But Christians are commanded to remember, and among the things we must not forget are our own sins against the Jews. For, in the words of the Jewish apostle to the Gentiles, the gifts and calling of God are irrevocable (Romans 11:29). And as he wrote elsewhere, charging a Gentile community of faith (1 Corinthians 5:13) with the words of Moses (Deuteronomy 17:7), we must purge the evil from our midst.