'In Spite of Myself' 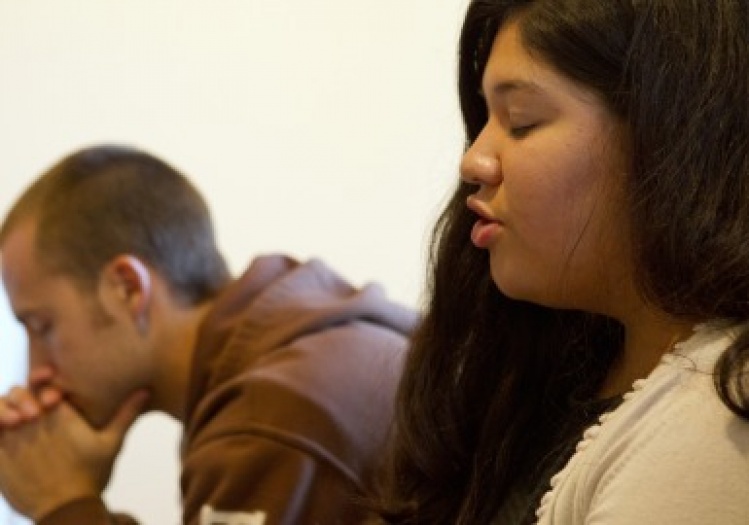 When I was in high school, before I made my obedient and insincere confirmation, I fought with my parents every Sunday morning. I didn’t believe what we say in The Creed, I told them. Mass was a “waste of my time,” and anyway, I didn’t even know if I believed in “God.” This frightened my mother, the part about not believing in God. It made her angry. “I didn’t spend all this money on Catholic schools to have my daughter end up in hell,” she said. Dad wasn’t quite angry; he was just visibly saddened. His conversion meant so much to him; he couldn’t see how I didn’t want to be Catholic. “Do it – just do it for me if you have to think of it that way,” he said. “You’re really doing it for yourself, but you’ll realize that later.” I submitted and signed up for confirmation classes, four weeks late, at my local parish.

Appeasing my parents proved a terrible reason for making my confirmation, at least initially. I slammed the car door when I was dropped off, and walked against my will down the steps into the church basement. I hardly listened to the instructors. Most of what they said didn’t apply to me: “This should be your decision. You are becoming an adult in the church; you are becoming a full member of the Body of Christ. This shouldn’t be boring, this should be joyful.” And then, “But this all comes with the responsibility of total commitment, so, you should be serious.” What worried me most was not that I was un-joyful or un-serious, but that I did not feel even close to totally committed to the church. When I stood on the altar waiting for the bishop to rub oil on my forehead, wearing the dress my mom picked out, I felt like a fraud, and felt the lie with gravitas. I made the sign of the cross sincerely, then. Oh God, what am I doing?

Something must have happened, though, because from then on my “position” on being Catholic began to change. During my senior year of high school, I dated a public-school kid who was studying to be a classical pianist and whose parents were both artists. They raised him to be “spiritual,” but definitely not religious. We had many arguments, through which I began to understand why being Catholic was in fact important to me. Everything from “Why do you have to use the word God?” to “How can you belong to an anti-gay, patriarchal, oppressive and stubborn institution?” was covered. I became defensive, and heard myself say “You don’t understand,” over and over, until that no longer held. One day I felt I’d tied something together: “Whether or not I believe in God, I believe in the church,” I said. When he spat back with the media’s representation of the Catholic church, I spat back to tell him what the church “really was.”

What the church really was, it so happened, was the church I’d learned from being raised by my parents. In making the financial sacrifice to send me to Catholic schools and in making sure I completed all the sacraments before I turned eighteen, my parents handed down what at first seemed emotional baggage, a confusing, heavy burden of disconsolate knowledge and guilt that I felt desperate to shed. But this baggage became a tool-kit. I wondered why it was so important for them that I be Catholic; I searched for the answer in examining their own lives and in how they lived out their faith.

My father runs a lay mission organization working in Haiti. For this job, he travels often – both back and forth to Haiti and on weekends to parishes across the United States to speak as part of the Missionary Cooperative plan and raise money for the schools, clinics, and agriculture projects in Haiti. Growing up, I’d go with him to these parishes. I met priests, nuns, brothers, and lay people all over the U.S. and in Haiti, all unique people united in this business of building the kingdom.

It really boils down to what it means to have a mission. As I’d hear my father tell parishioners: “It’s the idea that I didn’t just drop down on this earth with the freedom to do whatever I want, but that God has a specific purpose for me.” We all have a mission, a specific something to do with our lives and one that inherently involves bringing mercy to those who are suffering and forgiving those who cause it. This familiar Christian theme didn’t seem to fit with the kind of things being taught in religion class. My adolescent self, confronted with the mystery of faith, sought evidence. It made more sense to look for evidence that God existed in the work being done by God’s church than to find it in a textbook about the historical Jesus, or on a scale of how many abortions were prevented that year.

I left my hometown and my parents’ Catholic household to discover my own faith, making the decision to attend Fordham. I went to confession before I left, and the priest told me: “Listen. Don’t speak. For the first three months, don’t speak, you’re in a new place. Listen.” I did, and I continue to listen, in spite of myself.