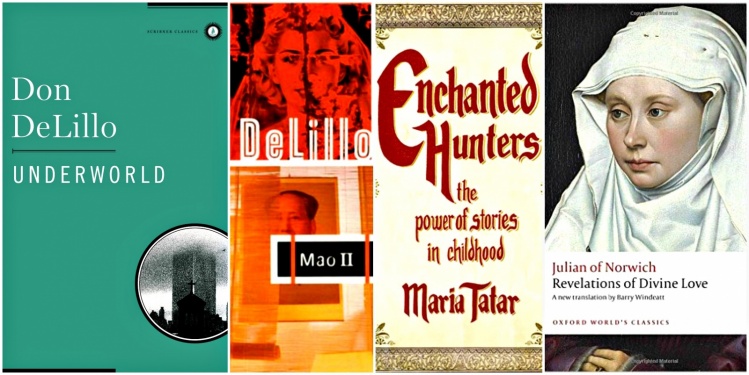 I have a hunch, altogether unprovable, that there is some essential connection between narrative and Christianity. Time for the believer has—like a story—a beginning, middle, and end. And ultimately we are assured that time—again, like a story—will carry us toward meaning and resolution, a moment when every question will be answered and every tear wiped away. In Genesis, God speaks the world into existence: “And God said: Let there be lights made in the firmament of heaven, to divide the day and the night, and let them be for signs, and for seasons, and for days and years” (Genesis 1:14). In the gospels, Jesus is both figured as language—“In the beginning was the Word, and the Word was with God, and the Word was God” (John 1:1)—and shown to be an adept storyteller himself. Parables, like poems and novels, embody difficult or complex truths in metaphors and images that allow us not only to understand the message, but to remember it. Even DNA is composed of an alphabet of sorts.

It strikes me as curious, too, that children should have an inborn capacity for belief and also be drawn to stories as moths to a light. We are called to “become as little children” in our faith, and Maria Tatar’s Enchanted Hunters: The Power of Stories in Childhood (W. W. Norton, $26.95, 304 pp.) makes one long for a return to youthful credulity in reading habits too. Tatar eloquently conjures the magic of early encounters with books, from the “feeling of ecstatic empowerment that comes with deciphering words for the very first time” to the “complete absorption, with all the senses engaged and energized” of novel-reading between the ages of, say, eight and fourteen. She also skillfully reverse-engineers some of the means by which children’s authors produce such powerful effects, and—in what are perhaps the most illuminating and moving parts of the book—elucidates the reasons for stories’ perennial appeal: those inevitable lonely stretches of childhood; an apparently universal desire to rush headlong into adulthood and experience; and an insatiable curiosity about the body, and life, and death, and other things that adults only ever whisper about. Books serve as “roadmaps for navigating the real world,” frequently offering a worst-case scenario as well as a way out. Though the experience of childhood reading is likely “irretrievable,” as the novelist Penelope Lively suggests, it is a marvel and a joy in this volume to glimpse it again, in flashes, through others’ memories and your own—“that suspension of disbelief, that total immersion in an elsewhere that seems as sharp and credible as real life.”

Don DeLillo does not write books for children, but adults desiring some assistance in navigating the dark wood that is twenty-first-century America need look no further than his novels. How did we get here, to an age of reality TV, near daily shootings, and perpetual entanglement in the Middle East? And more importantly, how do we find our way back? DeLillo recently received the National Book Foundation’s medal for lifetime achievement, and his magnum opus Underworld (Scribner, 832 pp.) offers a keen, prescient, and kaleidoscopic look at American life since the end of World War II. No important cultural or historical moment is omitted; no aspect of politics, consumerism, technology, suburbia, urbanism, or art, both high and low, has escaped his notice; and the arc he carves out of a half-century of experience—from Bobby Thomson’s 1951 homer (the other “Shot Heard ’Round the World”) to the rise of the internet—traces, among other things, a telling shift from collective, joyful national pursuits to solitary and often paranoid ones.

On a smaller scale, but no less in tune with the present moment, is DeLillo’s Mao II (Penguin, 256 pp.). As an extended meditation on mass media, terrorism, and individual identity formation, the novel will provide a fascinating read for anyone eager to make sense of ISIS and its appeal. To be “possessed of a selfness, a teeming soul,” is hard work, and one thing that terrorist organizations do is lift the burden of existential crisis and doubt from their followers. How this happens, and how it can be resisted—through fiction and true faith, through empathy and unmediated encounters with others—is what Mao II wishes to show. It is also, like much of DeLillo’s work, a love letter to the sights and sounds of New York, especially overheard snippets of conversations: “And it made his heart shake to hear these things in the street or bus or dime store, the uninventable poetry, inside the pain, of what people say.”

Though DeLillo has a fundamentally moral vision, it is not always a comforting one. It can be difficult to look through a gaze as clear and cool as his for very long. Afterwards, come in from the cold with a new translation of Julian of Norwich’s Revelations of Divine Love by Barry Windeatt (Oxford University Press, $17.95, 214 pp.). For six hundred years, the medieval anchoress’s mystical visions have offered a vivid picture of God’s love, unparalleled in its reassuring nature, and Windeatt’s learned introduction and sensitive, accessible translation will help readers see it—and the created world—with new eyes. The last time there was a “supermoon” (on September 27), the following passage came to mind:

He also showed a little thing, the size of a hazelnut, lying in the palm of my hand, as it seemed to me, and it was round as a ball. I looked at it with my mind’s eye and thought, “What can this be?” And the answer came in a general way, like this, “It is all that is made.” I wondered how it could last, for it seemed to me so small that it might have disintegrated suddenly into nothingness. And I was answered in my understanding, “It lasts and always will, because God loves it; and in the same way everything has its being through the love of God.”

Let the lights in the firmament be for signs and for seasons, indeed.