'The Spirit Is Still on the Job' 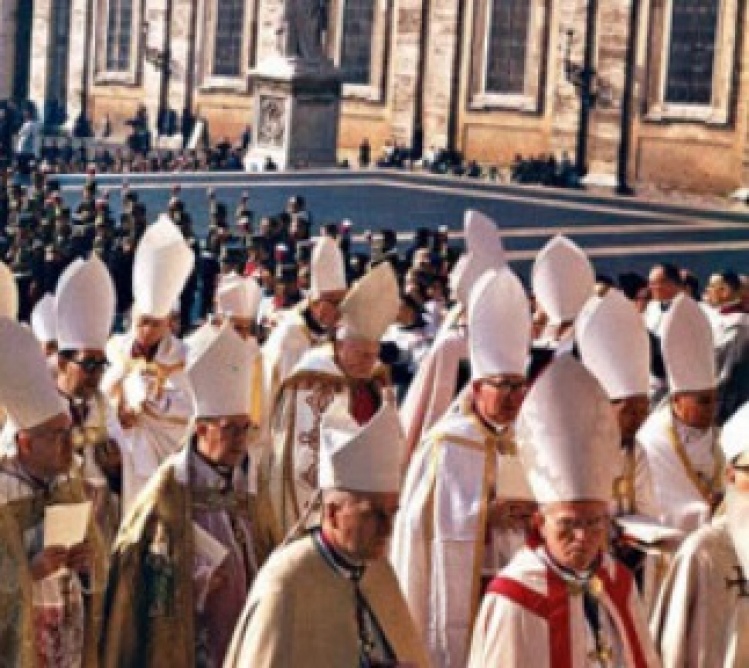 On October 11, 1963, Bishop Luigi Bettazzi addressed the Second Vatican Council on the need for collegiality. He was the newest bishop participant, having been consecrated only a week before, and, at thirty-nine, he was also one of the youngest.

Now eighty-nine, Bettazzi is the most active of the five surviving Italian participants, keeping faith with the council by writing and lecturing about it tirelessly. The son of a Turin engineer, he admired the priests of his boyhood and entered a junior seminary at nine and a half. He later learned that, upon marrying, his mother had made a pact with God: if he gave her many children (Luigi was the third of seven), she would give one back to him as a priest.

Bettazzi studied philosophy and theology at the Jesuit Gregorian University in Rome and then took a philosophy degree at the state university in Bologna. After teaching at the Bologna seminary, he became an auxiliary to Cardinal Giacomo Lercaro, the archbishop of Bologna, and one of the four Vatican Council moderators. In 1966, Bettazzi was made Bishop of Ivrea, a diocese of about 25,000 souls north of Turin; he is now its emeritus bishop. He was president of Pax Christi in Italy from 1968 to 1975 and served a seven-year term as the organization’s international president.

Speaking to him recently at his sister’s home in San Lazzaro, about five miles from Bologna, I put it to him that, fifty years after the Second Vatican Council, the collegiality he recommended still has to be put into effect.

Luigi Bettazzi: Our hopes in this matter have been foiled, but they weren’t illusory. They were part of the whole council experience. It made me fully aware for the first time of the catholicity of the church: we Italians often think of the church as "our" thing, but at the council so many bishops were from Africa, Asia and Latin America, whereas at the First Vatican Council, which ended in 1870, the bishops from these places were usually Europeans rather than native-born. Secondly, the Spirit was abroad—you could feel the dynamism as, united in faith, the participants sought the truth needed for new times. Thirdly, I was invigorated by meetings with other bishops who, like me, were inspired by a Charles de Foucauld–type spirituality and believed their task was to serve the poor and live a modest lifestyle as we promised in the “Catacomb Pact.” For me, a key Gospel passage is Luke 10:8–9, which tells apostles they should help the neediest: “Cure those who are sick, and say, ‘The Kingdom of God is very near to you.’”

Desmond O’Grady: That explains the high hopes, but if they were not illusory, how have they been blocked?

LB: Mainly by people who have preserved the mentality of the conciliar minority and remain particularly influential within the church’s central administration, the Roman Curia.

DO: But even some who foreshadowed the council, such as Jacques Maritain, were upset by the immaturity that emerged after it, and by worrying indicators such as the drop in religious vocations, the decline in Mass attendance, and the extensive ignorance about the faith of many younger Catholics. The church seems divided between those who are battling to stem the decline they see as resulting from the council, those who are frustrated by what they consider its betrayal, and those for whom it happened a long time ago and does not mean much one way or another.

LB: If the need for aggiornamento or updating had been ignored and there was no council, the negative effects would have been significant. But I agree that the post-conciliar period altered many perceptions. Pope Benedict, who as an adviser to Cardinal Josef Frings pushed for change at the beginning of the council, has recorded that his experience as a university teacher during the student revolts in 1968 made him more cautious as he saw what nihilistic forces could be unleashed. But I’m still convinced the council was a new Pentecost that has produced positive fruits and can produce still more.

DO: Isn’t collegiality a chimera as applied to leadership of the whole church, as it could produce yet another Roman Curia? Could bishops do an effective collegial job if they were only in Rome part-time?

LB: The precise form it would take has to be worked out but, unlike the present curia, the college would consist of bishops who would not lose contact with their dioceses. And they could have briefer terms than the curia, say, two years. The important thing is that the order would be Pope, college of bishops, curia, not, as at the moment, pope, curia, then bishops who meet at the synod, which is only consultative. Collegiality would have strengthened controls that could have enabled us to avoid some of the shameful recent scandals.

DO: Is the blocking of collegiality simply a curial fear of losing power, or a historical instinct that warns that “conciliarism” is a threat to papal primacy, prestige and influence?

LB: Clericalism weakens the church at all levels, but a desire to defend the papacy may also be involved in the distrust of collegiality. However, this is mistaken; the point of my council speech was that, once they are consecrated, bishops share with the pope a responsibility for the whole church. This has a rock-solid theological tradition that is often ignored. Collegiality can make the papacy more efficacious rather than weaken it. Papal decisions would be more acceptable if more participation by fellow bishops was involved.

At the moment, at many levels, the last word is seen as the only word. It is also the first word in too many cases, because conclusions are reached before discussions begin. At meetings of the Italian Bishops’ Conference, the president opens the proceedings by establishing the line to be taken; if one has something different to say, he is reminded that that the line has been settled by the president, who is not elected but appointed by the pope. Some would like to see this approach applied throughout the whole church.

DO: Is this too caused by fear of dissent, of lack of unity?

LB: If it is, it’s an excessive fear. The council showed we should have confidence that mutual benefits derive from discussions in which each participant trusts the good faith of others, rather than fearing openness.

DO: Did Cardinal [Carlo Maria] Martini have this in mind when, shortly before his death [in August 2012], he said the church was two hundred years behind the times?

LB: Maybe he meant only a hundred years. I think he meant that many have backtracked to a preconciliar mentality or have never gone beyond it.

DO: Is that a bid for a Vatican III?

LB: Martini did not want that and neither do I. He had in mind not a huge unwieldy council, but the world’s bishops gathering in Rome for, say, a month, to discuss one topic with the pope, such as bioethics or sexuality, and then draw conclusions. As those who have a pre–Vatican II mentality are still influential, I don’t favor a Vatican III now because they could turn back the clock.

DO: So the conciliar minority has won!

LB: No, they’re fighting a dour defensive battle. One of those who prepared the council, Yves Congar, said it would take fifty years to be implemented—which takes us to 2015, so the next couple of years should be intense. Seriously, we should recognize there has been implementation in fields such as liturgy with adoption of the vernacular, ecumenism, greater attention to the Bible, a more positive attitude to worldly endeavors, structures for collegiality at the lower levels if not the top. The new ecclesial movements are positive even if some tend to reinforce themselves almost at the expense of the church as a whole. We need not simply new forms, but a new spirit—for instance, even the conciliar-style Mass can be a routine rather than the center of our ecclesial life. Pastoral councils have to be a real sharing and not just a façade dealing exclusively with trivial matters. Different outlooks can be recognized; in 32 years at Ivrea, our pastoral council did not find any issues on which positions were irreconcilable.

DO: As far as a more positive attitude to the world goes, Benedict has suggested that the attitude of Gaudium et spes was superficial.

LB: Some participants wanted yet another session of the council to deal with the subject in depth. But the first section of Gaudium et spes lays out principles still valid even if the second, which deals with particular issues, could be further developed.

DO: You began as a bishop in Bologna, whose school of historians of the council is accused of claiming a false discontinuity of the council with the preconciliar church, whereas Benedict XVI underlines that it implies reform within a basic continuity.

LB: The council endorsed continuity with the basic doctrines of the church but also meant pastoral discontinuity—adoption of new approaches for new circumstances. The anxiety over doctrinal integrity has produced half-heartedness about pastoral initiatives.

DO: Aren’t those nostalgic for the conciliar élan in danger of harking back to fifty years ago without facing new conditions?

LBL This could be true if they ignore that the council meant adoption of a method of consultation, listening and learning, which should be used when dealing with innovations such as social media.

DO: It is consoling to find that, while some seem to have forgotten the future proposed by the council, you still have hopes for it. But if those wary of the council are still so influential, doesn’t it suggest that they are ultimately unbeatable?

LB: No. They can be surprised. John XXIII stunned them by convoking the council. When he announced this at St. Paul’s-Outside-the-Walls he asked for comments, but there was silence. The Roman Curia was confident it could control the council. But again, when it proposed the names for the various commissions at the opening of the council, the bishops immediately rejected them and elected the members they wanted. For me such events show that the Spirit was at work then and I’m confident the Spirit is still on the job today.

Funding for this article has been provided by a grant from the Henry Luce Foundation.

Desmond O’Grady, an author and journalist, has been Vatican correspondent for the Washington Post, the National Catholic Reporter, and the (London) Tablet.

Can Francis Cure the Curia?