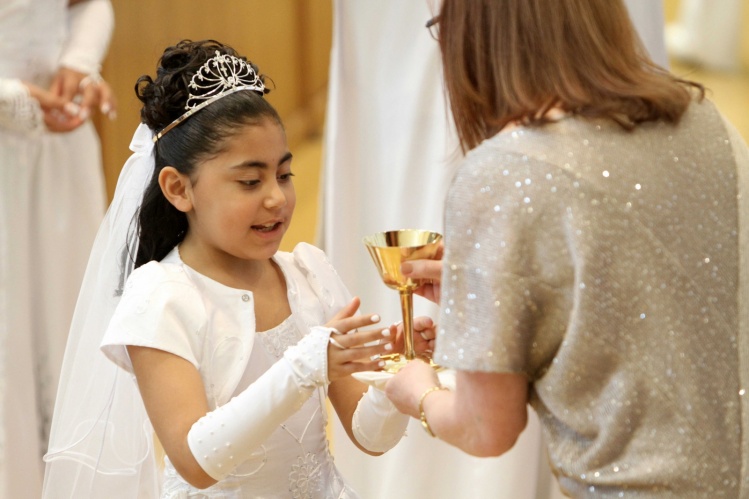 It seems like all my life people have been arguing about the appropriate age of confirmation. Should it be conferred along with infant baptism, as it is in the Eastern churches? Should it be united with first Communion, inspired by the Rite of Christian Initiation of Adults? Should it be delayed to the late teen years, young adulthood, or even after marriage? Should it be celebrated in adolescence, as a rite of passage, like a Catholic bar mitzvah? Some have even suggested that confirmation should be a repeatable sacrament, to be administered whenever one has an experience of conversion or faith renewal.

Two Catholic bishops, Samuel Aquila of Denver and Larry Silva of Honolulu, have recently announced that they will restore the traditional order of the sacraments of initiation in their dioceses, celebrating confirmation and Eucharist in a single ceremony for Catholic children aged seven to eight who were baptized in infancy. They join a small but growing number of dioceses that have reviewed the practice of adolescent confirmation and found it wanting. In the words of Pope Francis, confirmation has become the “sacrament of goodbye” as adolescents “graduate” from confirmation programs and are never seen again. The pope has a point. These bishops are doing the right thing by moving confirmation to an earlier age, and I hope others will follow suit.

I understand why enthusiasts for adolescent confirmation value the programs they conduct for teens and preteens. They are reaching kids at a critical time in their lives. Youth catechesis is important. Having a special ritual for young people draws families together and gives a certain luster to these programs. Many argue that without pressure from their parents to receive confirmation these young people would abandon ship, so why not use confirmation to keep them around a little longer? Unfortunately, a couple of important facts about sacraments are easily overlooked in this debate.

The first is that Eucharist is the culmination of Christian initiation. According to the Catechism, according to canon law, according to the great tradition of Catholic sacraments, Eucharist is the goal, the high point of all Christian initiation. Christians are baptized and confirmed in order to come to the table, and it is from the table that they are sent into the world to live their faith and to embrace the mission of Jesus. Setting the bar higher for confirmation than for Eucharist—requiring six, eight, even nine more years of catechesis before one can be considered “ready”—is grievously paradoxical.

The pastoral fallout of this confused situation is obvious. Confirmation is ringed with social requirements, while Eucharist is reduced to an exercise in personal piety. Many of those enrolled in confirmation programs do not even attend Mass regularly, and neither do their families. Confirmation programs rarely reverse this sorry state of affairs. Why are we pouring resources into getting youth “ready” to celebrate a one-time event? We should be bending all our efforts toward helping them engage with the celebration of the Eucharist—a grace-filled practice that can continue week after week for the rest of their lives.

Second, we sell short the grace of confirmation by assuming that children are not ready or too immature for it. By deferring confirmation until adolescence, we tacitly agree that it isn’t going to “do anything” for the child that will be missed in that intervening period. But I’m not so sure about that. Sacraments are not magic, but they do work in mysterious ways, as gifts and doorways and identity markers. Suppose one entered adolescence with a sense of having already been “fully equipped” with the Holy Spirit from the age of reason, rather than always “waiting” or “preparing” for something not yet received? What would it be like if the task of adolescent faith development began with realizing that a huge gift has already been given in baptism and confirmation, and that now the challenge is to learn how to live according to an identity we already possess?

I was confirmed at age eight, one year after my first Communion. No particular theory was announced for this practice. It was just the way it was. We had to pass a test, in which we recited from memory the Acts of Faith, Hope, and Love. We wore red beanies and white graduation gowns. We received the then-obligatory slap on the cheek from the bishop (only a light tap). Then we went home and had a party. I found the ceremony itself rather disappointing. First Communion had been so exciting. You got to eat the Body of Christ! Thereafter you could go to Communion all the time! Confirmation didn’t live up to that high standard. Nevertheless, it did something for me. With that anointing I was given my inheritance, the completion of baptismal grace. The beautiful dignity of that sacrament remained with me in hidden ways.

By restoring the order of the sacraments of initiation for children of Catholic parents, the bishops of Denver and Honolulu are challenging their people to see adolescent catechesis and youth ministry as worthy endeavors in their own right—not because they lead to confirmation, but because they are part of how the church accompanies children on their journey to adulthood. We need to reach out to our young people. But we also need a sacramental polity that reflects the best of our tradition, with Eucharist returned to its proper place as the crowning event of Christian initiation.

Improvisation and the Passion