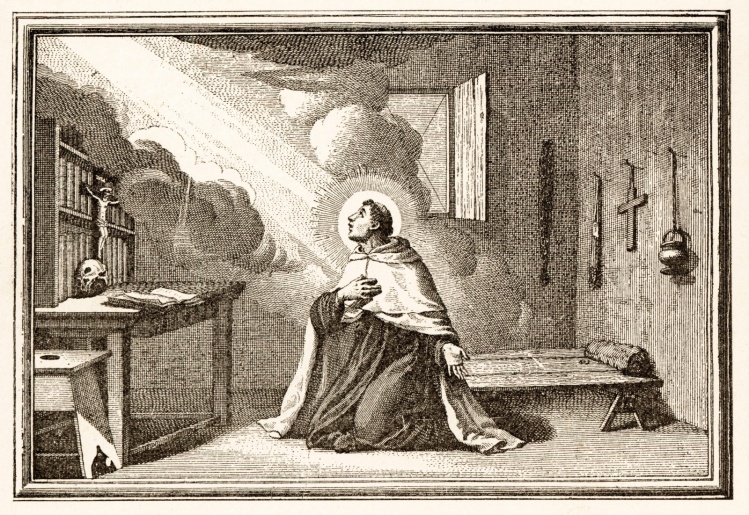 Twenty years ago, I visited the Convento de San Miguel in Úbeda, where Spanish poet San Juan de la Cruz died in 1591. I’d hoped that witnessing the last home of the medieval Carmelite friar and doctor of the Church (his official title is doctor mysticus, or mystical doctor) would be revelatory. A Catholic poet myself, I’d read every translation of his elegant, enigmatic work. But even with my limited grasp of Spanish, I could tell the translators had taken too many liberties and lost his original meanings, or had been too literal and lost his music. As I crossed into a roped-off room to touch what had been his writing table, I didn’t know what I expected would happen. Doing so yielded nothing—just like reading those translations. A bit disappointed, I descended an old stone staircase and followed the gift-shop signs to the exit.

While the poetry of San Juan de la Cruz is admired by poets and lovers of poetry for its mystical beauty, it often gets the side-eye from religious. Thomas Moore, a one-time Carmelite himself and author of Care of the Soul, among other books, once wrote:

One of my Pastors once remarked to me, with a grimace that bordered on pain, “St. John of the Cross? I cannot get anything out of him. Even at the Seminary we said ‘What is it that he is saying?’ Is he saying anything at all to us?” Sadly, I must admit that I often meet people who display similar reactions. Why? What causes people to be so turned off by this saint, while others become so turned on?

The saint’s poems, written more than four hundred years ago and considered the apex of Spanish mystical literature, seem to forget the familiar, easy, and convenient, to slip into darkness and unknowing to find God. They are written in a highly symbolic, sometimes sensual language. It’s no wonder translators got it wrong. But I was so impressed by the new version by poets María Baranda and Paul Hoover that I emailed them to ask how they’d managed to keep San Juan’s paradoxes intact without adding words and ideas.

“We had to deal with many things,” Baranda answered. “The linguistic signs, the doctrinal/religious meanings. There were some words that we couldn’t touch: ‘soul,’ ‘Beloved.’ We were trying not to interpret, but to keep certain words as they were.”

Consider this lesson in apophatic theology (also known as the “via negativa” or “negative way”) from San Juan’s poem “The Mount of Perfection,” included in this translation:

To come to what you are not

go where you are not.

When you observe something,

stop throwing yourself at everything.

To come to the all in all

abandon the all in all.

And when you come to have everything,

have it with nothing to have.

Or this paradox, from “Other Verses to the Divine”: “I was fallen so much, so much, / that I went so high, so high, / that I captured my prey.”

“Translation is difficult in the first place,” Hoover echoed, “because you always have to give up something. With San Juan, we had to give up the beauty of his cadence and rhymes. Trying to perfect the rhyme would twist his meaning.”

That beauty can be seen in the skillful interaction of rhymes and off-rhymes in the saint’s sensual “Dark Night”:

Without those rhymes, though, the meaning still shines through:

On my flowering breast,

reserved only for him,

there he fell asleep,

and I gave him the gift,

and the breeze of the cedars blew.

But light broke through darkness: one night he heard a villancico—popular ballad—sung by a passerby outside.
sharetweet

San Juan composed “Dark Night,” as well as his other great work, “Spiritual Canticle,” in 1578 while imprisoned for eight months in a filthy ten-by-six-foot cabinet in the Carmelite priory in Toledo. A group of his Carmelite brethren, virulently opposed to the reforms that Juan and his mentor and protector, St. Teresa of Ávila, proposed for their order, had kidnapped him. Unable to stand up, he was lashed regularly and fed sparingly. But light broke through darkness: one night he heard a villancico—popular ballad—sung by a passerby outside. This song-form provided the container for San Juan’s complex poems about God’s presence-in-absence, and lends a postmodern, appropriated quality to his work.

“Many of the poems were written using contrafactum,” Baranda noted, “a Latin term which means the substitution of one text for another without substantial change to the music.”

Baranda pointed out literary techniques like rhymed quatrains, and forms like the letrilla (a Spanish lyric poem of eight syllables or fewer with a one-line chorus, called an estribillo, at the end of each stanza):

I entered where I didn’t know,

and I remained not knowing,

going beyond all knowledge.

“San Juan mixed popular and classic in the best way,” she told me. “Like a wave that comes to our shore with fresh ideas, beautiful sounds. There were some words that meant other things in those days, thus we needed to be careful. But his poems don’t sound old. They are alive.”

Juan’s familiarity with poetry and poetic forms was part of his extraordinary lived experience of darkness-in-light. He was born Juan de Yepes y Álvarez in 1542 in Fontiveros, near Ávila. His family were conversos, Spanish or Portuguese Jewish converts to Catholicism during the fourteenth and fifteenth centuries. (The Spanish Inquisition, the most infamous of the Church’s three inquisitions, was established to root out heretics among conversos and moriscos—Muslims similarly forced to convert under pain of deportation.) Juan’s father, Gonzalo, gave up a family fortune to marry an impoverished orphan, Catalina Álvarez, whose talent was weaving fine silk with linen or cotton into buratto for the wealthy. Gonzalo’s death three years after Juan’s birth plunged Catalina and her other two sons into such destitution that the oldest son died of malnutrition. Juan was sent to an orphanage. In medieval Andalusia, this inauspicious beginning might have doomed him, but at the orphanage he learned to read and write. When he was ten, the staff at the hospital where he worked collecting alms noticed his abilities and sent him to a colegio (grammar school) run by the recently founded Society of Jesus. There he studied the works of Virgil, Horace, and Seneca, and his knowledge of Latin opened the way for his acceptance to the University of Salamanca. Like his mother’s buratto, the poems that Juan wrote while imprisoned in Toledo—as well as the events of his life that lead up to that moment—blended the fine silk of divine mystery with the common cotton of medieval life.

In August 1578, eight months after being taken prisoner, San Juan broke free by crawling naked out a small window and seeking refuge at a nearby convent established by St. Teresa, his mentor. His experience of finding freedom in darkness—of not merely having faith despite the most dire circumstances, but of finding God in the circumstances themselves—is reflected in his most beautiful lines. From “Dark Night”:

Oh night, you guide me!,

oh night, kinder than the dawn!,

beloved in the Beloved transformed!

From “Songs Written About an Ecstacy of High Contemplation”:

The more that one knows,

the less he understands,

that it is the darkest cloud

that elucidates the night

From “Other Verses to the Divine”:

When I climbed ever higher

my vision was dazzled,

and the strongest conquest

was made in the dark

“The strongest poetry communicates silence and contradiction,” Hoover said. “Ironically, it must use words to do so. Direct statements of truth fall flat. That’s why poetry is so useful, with its fragments and incompletions, sometimes seeming to be nonsense. They are stirred and joined by an intimation.”

“This is a translation done with much respect,” Baranda wrote, “because his words are not just words, but the way God communicated with him. There is something else—the ineffable. Did we get it? Did we really touch the inner power of the poems?”

I didn’t touch the ineffable when I put my hands on the saint’s writing table. But midway down that old stone staircase I involuntarily turned to a small window to my left that looked out onto an airy courtyard. As I did so, I realized that Juan had (possibly) also made that same involuntary head movement whenever he went up or down those steps. I felt like I’d stepped into an echo of his energy—a still-vibrating time-space stamp. Reading this revelatory new translation, I get the same feeling.