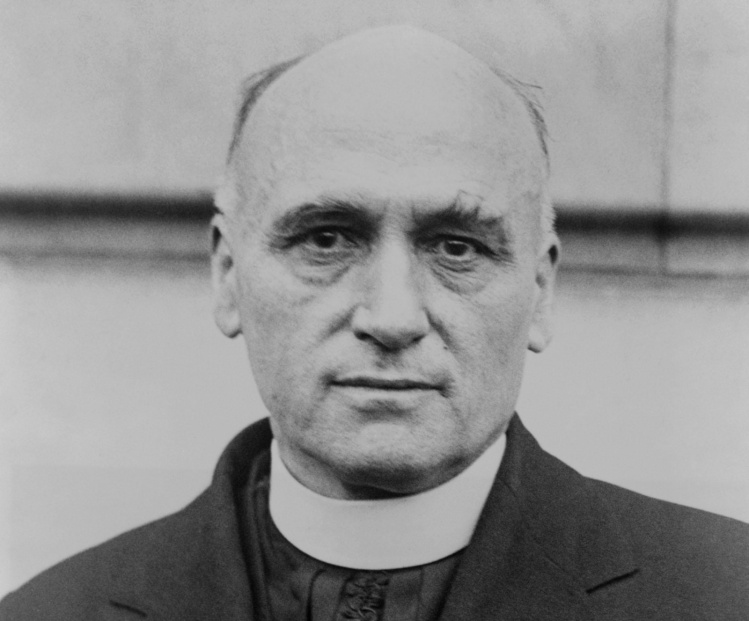 In 1913 and 1914, the now-defunct magazine Everybody’s hosted a running debate between the economist-priest Msgr. John A. Ryan, a professor of “industrial ethics” at the Catholic University of America and an advisor to the National Catholic Welfare Council (a forerunner of the U.S. Conference of Catholic Bishops), and the labor lawyer Morris Hillquit, a co-founder of the Socialist Party of America. The series was later published in a standalone volume as Socialism: Promise or Menace?, with Hillquit arguing for “promise” and Ryan—as an exponent of Catholic social doctrine—for “menace.”

But as Fordham theologian Christine Firer Hinze recounts in her latest book, Radical Sufficiency: Work, Livelihood, and a U.S. Catholic Economic Ethic, Ryan’s contribution in fact “balanced on a razor’s edge between ameliorative reform and radical transformation.” “After vigorously presenting a Catholic case against socialism,” she explains, “Ryan concluded that while church economic teaching does not demand the revolutionary overturn of the market system, from a Catholic perspective, a just economy could entail ‘the present system, greatly, even radically amended.’”

One has to imagine Ryan tossing off this comment at least partly tongue-in-cheek. What, after all, is the difference between “overturning” the system and “radically amending” it? As comical as it might sound, though, what Hinze calls the “radical-reformist tension” has been a constant in Catholic social thought since the beginning. And rather than planting a flag squarely on either side of the debate, Hinze follows Ryan in straddling the borderline. Echoing his description of his own economic proposals as “sufficiently radical,” she uses his thought as the point of departure for outlining what she terms a “radical sufficiency livelihood agenda.” Such an agenda

presses those struggling for work justice to take into account and responsibly address both the inequities of gender, race, and class, and the looming ecological crisis. Its stipulations for a properly functioning economy are radically inclusive: everyone must be enabled to participate, and everyone must be able to gain access to enough. And while it is dedicated to actionable strategies for incremental reform, it is radical in both its critical analysis of the economic status quo and its recognition of the deep changes—the root-level reorientations—that an inclusive livelihood political economy requires.

John Augustine Ryan was born in Vermillion, Minnesota in 1869 to Irish immigrant parents, and grew up working on the family farm alongside his ten younger siblings (see Arthur S. Meyers’s article “Social Justice Warrior: The Legacy of John A. Ryan,” Commonweal, July 2, 2018). Ryan’s lifelong interest in economic ethics was kindled when he read Henry George’s Progress and Poverty as a teenager, though he admitted to not understanding all of it at the time. He first discovered Pope Leo XIII’s Rerum novarum while in seminary in 1894, and as Hinze puts it, “was thrilled to find vindicated in nascent papal social teaching his own heartfelt attraction to a priestly career dedicated to grappling with social issues and advancing justice.”

Understanding Catholic social teaching as a kind of ideology will enable more substantive and effective critiques of “other, currently dominant ideologies.”
sharetweet

After being ordained in 1898, he received permission from his bishop to attend graduate school at the Catholic University of America, where he received a Doctorate of Sacred Theology in 1906. His dissertation, later published as a coauthored work with the economist Richard Ely, was titled A Living Wage and made both a moral and political case for statutory minimum wages—decades before the enactment of the first federal minimum wage in 1938. In 1916, Ryan became professor of moral theology and industrial ethics at CUA, and served in that position until his retirement in 1939. He also advised President Franklin Roosevelt on economic policy during the 1930s and 1940s, and helped to shape key elements of the New Deal.

Hinze’s objective in Radical Sufficiency is to update Ryan’s vision of a moral economy for our own day and age, borrowing those principles that have stood the test of time while acknowledging Ryan’s limitations, in particular his blind spots around gender and race. Ryan’s idea of a “family living wage,” for instance, was explicitly conceived of as the amount a male laborer had to earn in order to support a wife and children. He does maintain in A Living Wage that women performing the same jobs as men should receive the same compensation—but only because allowing women to be paid less would give employers an incentive to fire men and replace them with women. “Unless we hold that an increase in the proportion of women workers is desirable,” he wrote, “we must admit that the social welfare would be advanced by the payment of uniform wages to both sexes for equally efficient labor.” Hardly an applause line for an equal-pay rally!

Hinze also relates the story of a lecture that Ryan gave at Howard University in 1943 on the topic of race, “one of his only recorded speeches on the subject,” in which he offered a similar admixture of progressive attitudes and soft bigotry. Accounts of the event report that a number of faculty at the historically Black institution were incensed by Ryan’s calls for “patience” on the part of racial minorities experiencing discrimination in the workplace and the rest of society. While he did insist that those targeted by such discrimination should be “vigilant, active, and constant in struggling to remove by all legitimate means the disabilities under which they labor,” he also interspersed these sentiments with tone-deaf comments about how “the Negro…should especially love white friends…even when they advocate patience and a realistic approach to interracial conditions and practices.” Hinze writes that “Ryan’s paternalist—and racially self-serving—words and tone are shamefully disappointing” given his stature as “the country’s most distinguished Catholic advocate of labor justice.” She bracingly concludes that “‘the workingman’ Ryan so ardently defended had not only a normative gender but a racial identity: he was white.”

Radical Sufficiency’s balanced and nuanced appraisal of Ryan’s thought is characteristic of Hinze’s approach to Catholic social thought more generally, which she sees as an effective resource for countering free-market capitalism and other pathologies of modernity, even as she acknowledges its weaknesses and lacunae. For example, she offers one of the best critiques I’ve read of the “modern papal social teaching’s generally negative understanding of ideology,” and its description of “Christian truth and faith as…nonideological.”

Contrary to the view espoused by most recent popes, according to which “ideology” is necessarily a “skewed interpretation of reality, often imposed on others by force or manipulation, which undermines the good of persons and communities,” Hinze maintains that adopting “[a] broader understanding of ideology as a coherent set of beliefs and values about the social order” will allow us to “dereify modern Catholic social documents and tradition, enabling us to analyze them more critically, and accurately” and to “better articulate and advance [a livelihood] agenda in the face of other, currently dominant ideologies that obstruct or oppose it.” This tendency to portray one’s beliefs as “nonideological” in order to make them seem more reasonable is all too common in the realm of politics, where so-called centrist politicians in particular always work to contrast themselves with the “ideologues” of the left and right. But as Hinze rightly points out, any “coherent set of beliefs” (a designation that, come to think of it, may or may not include centrism) is in fact an ideology, and there is no reason to shy away from acknowledging that. Understanding Catholic social teaching as a kind of ideology will enable more substantive and effective critiques of “other, currently dominant ideologies.”

For instance, Hinze pans “forms of popular feminism typified in Facebook CEO Sheryl Sandberg’s widely read book Lean In” that celebrate wage-earning as “a hallmark of women’s liberation” while neglecting how “[t]he benefits of the two-earner family ideal disproportionately accrued to middle- and upper-middle-class women with spouses or partners who could afford to outsource household work.” She draws on the work of the political theorist Nancy Fraser, who has keenly observed how the “feminization of the workforce,” despite its undeniable benefits, has been used to “ramp up [the] assault on the working class,” and how Sandberg-esque thinking ultimately helps to prop up exploitative market arrangements. She praises Fraser’s “universal caregiver model,” which proposes an alternative to both a gendered “breadwinner-homemaker model” and the “universal wage earner model that marketizes or shortchanges the household economy.”

Because of its scholarly style, Radical Sufficiency may be better suited to college or graduate seminars than to a popular readership. Indeed, it strikes me as an ideal introductory text to economics and Catholic social thought, drawing extensively from the literature of both disciplines. It is, if anything, too comprehensive: it almost certainly could have been somewhat shorter without losing much of importance. A chapter on race features a discussion of ethnic classifications of Caucasian Europeans in the thirteen colonies, while a chapter on class detours into a meditation on Maslow’s Hierarchy of Needs and the psychology of group belonging before quoting from Alexis de Tocqueville. These sections are interesting and informative in their own right, but they nevertheless come across as tangential to the book’s main arguments, and they give the text a meandering feel.

Despite buying into some of the unfortunate prejudices of his day, the “Right Reverend New Dealer” John A. Ryan was undoubtedly an accomplished scholar, activist, and priest who contributed immensely to defending the dignity of labor through his academic work, his political efforts, and his religious ministry. Many of his observations about political economy ring just as true today as they did a century ago. He had no patience for academics and other elites who disdained organized labor or sought to portray unions as obsolete, declaring in A Living Wage that “in the matter of Unionism…the untutored mind of the workman has gone more straight to the point than economic intelligence misled by a bad method.” If he were alive today, he would unfortunately find that little has changed.

The enduring relevance of Ryan’s thought makes him a figure who deserves to be studied much more widely, not only by Catholics but by anyone interested in the history of the American labor movement and the need to revitalize it in the twenty-first century. With Radical Sufficiency, Christine Hinze has written an informative and fair-minded introduction to his life and work. Just as important, she has shown how the valuable aspects of his legacy can and should be carried forward by those striving to “greatly, even radically amend the present system.”